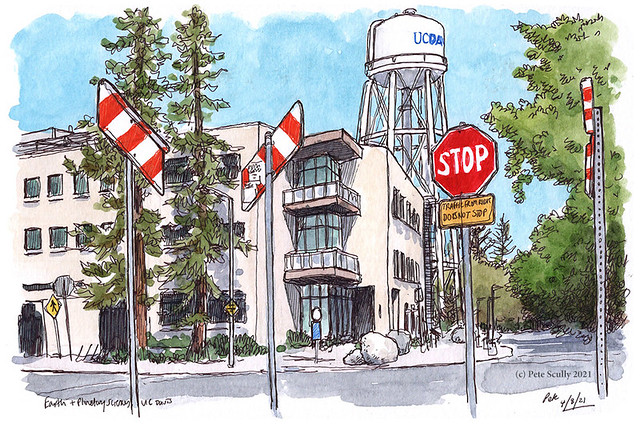 This is the Earth and Planetary Sciences Building at UC Davis, with the big water tower in the background. there are actually a couple of big UC Davis water towers on campus, plus at least one more like this in north Davis, but this is the good looking one, the leader, the big brother. The ‘Barry’ of the Water Tower Bee Gees, standing tall over the others with a huge mane of lustrous hair. Ok maybe not the hair, maybe it’s more Clive Anderson. You remember that interview, the one where they walked out? The one where Barry Gibb got up, said “You’re the tosser, pal” and left? Classic TV moment. I’d always liked Clive Anderson, funny man, and when that first happened I didn’t really warm to Barry Gibb much, but watching it back again Clive Anderson was pretty out of order, and the Bee Gees were well right to say, yeah we don’t need this smug little guy taking the mickey out of us for a few aren’t-I-clever-and-hilarious giggles on late night TV on channel 4 or whatever it was on. Ok, this is obviously a very specific early-90s-British-TV tangent, let’s get back to the drawing. I drew this while on campus during a late lunch (I think I had Zoom meetings during lunch), this is very close to my office. Earth and Planetary Sciences is right across the street from us, and I drew this at the edge of the Arboretum, by the newly reopened LaRue bridge. The water tower is a big presence, and likes to appear in official photos, like a sentinel of education. That metaphor doesn’t, hehehe, hold water. I like the STOP sign in the foreground, with the unusual orange and white striped signs around it, I don’t know what they are for.  They add a nice bit of colour into the scene. The Earth and Planetary Sciences building is very interesting. I remember when they had the groundbreaking for it, I went over with my old supervisor to watch the special ceremonial laying of the first brick, and then they went full steam ahead to build it. There used to be a small wooden building on this site not dissimilar to the ones I draw so often at the Silo area, and I remember saying “I should draw that some time” but never did, and then it was knocked down. I did draw a tree with the empty space of the future building behind it. I was really into drawing ALL of the branches. 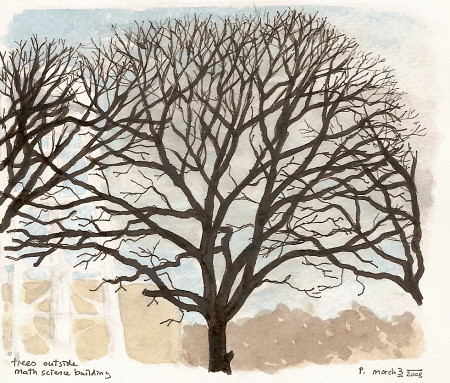 That was in March 2008, which seems like a very long time ago, but it was actually only a week or so after Spurs last won a trophy. The same trophy that we will be (probably not) winning in a cup final at Wembley in a week or so.

One thing I really like about the Earth and Planetary Sciences Building (apart from the name which is really future-thinking, considering we have been to zero other planets yet) (apart from with robots of course) (we have visited them virtually via Zoom, I suppose) (actually they have some amazing space rocks in there, I lifted one up on Picnic Day a few years ago and it was super heavy) (or maybe it was kryptonite and it just made me weaker? We’ll never know for sure), anyway the thing I like the most is that there are these huge rocks all around the outside of the building, all with labels, some are volcanic and all are interesting. My son is really into geology (or he was, before he discovered looking at his phone all day) (admittedly he does play a lot of Minecraft which is technically still about geology) so when he’d come to my office during the summers we would sometimes go down and look at the rocks. It’s brilliant working at a university where lots of very clever scientists work. In the building next door is the Entomology museum, where they have loads of interesting and frankly frightening creepy crawlies. On the other side is an actual nuclear lab with big nuclear machines in them, yeah I don’t visit that one. These aren’t very good descriptions, they sound like a 9 year old has written them; it’s late, it’s been a long day, and I’ve forgotten how to write, if I ever knew. I can’t wait for campus to all be open again. Soon, soon!