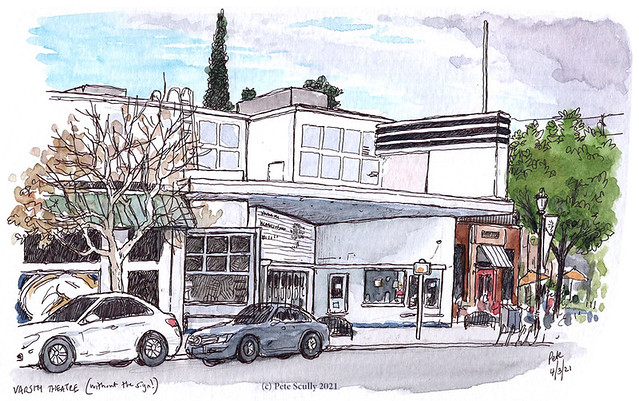 This is the Va… wait what? This is the [insert name here] Theatre on 2nd Street in Davis, which as you can see is currently going by The Theatre Known Formerly as Varsity. (Sorry, “Theater”). Regular listeners will recognize this building from the 500 or so times that I’ve drawn it before, but there was one big difference. Can you tell what it is yet? (Um, that sounded a bit like Rolf Harris, you might be a bit more careful with your catchphrases) That’s right, the ice cream shop is closed. No I’m kidding, it’s the historic “Varsity” sign which ahs been taken down temporarily to be cleaned, or fixed or something. The movie theatre itself has been closed during this pandemic you might have heard about, though coming soon, folks, coming soon we will have cinemas open again. I miss going to the pictures. Nobody says that now, “going to the pictures”, it sounds like something people said in the 1930s. “Oh you’re going to the pictures, eh grandad? Don’t forget your penny farthing and your flat cap!” Oh right because “movies” doesn’t sound old-fashioned at all, like you have to make a distinction between watching a film that moves and one that doesn’t? “The movies eh grandad, well see ya later gramps, I’m off to the talkies“. In Britain we generally say “film” rather than “movie” (though my nan, who was from Dublin, used to pronounce it “fill-um”) and “cinema” rather than “movie theater”, and “theatre” rather than “theater”, and that is the end of today’s unwanted transatlantic vocabulary lesson. But I miss going to the pictures, it was something I used to do a lot. I’d go and see a film / movie here in Davis at one of the three cinemas / movie theaters in town, and then go for a pint / not quite a pint* at a local bar / pub. (*They like a 16oz “pint” in America, as opposed to a 20oz pint in British pubs). And of course I would then sketch the bar/draw the pub. As for the Varsity, I wonder if they will “accidentally” rearrange the letters when they reinstall the sign, Fawlty Towers/Watery Fowls style? It could say “Travisy” maybe, or “Sir Vyta”, or “Sty Vira”, , or “Rayvist” (which sounds like a magazine for techno -clubgoers), or “Stray IV” (people might think it’s a sequel movie about a cat, from the streets, who makes it big against the odds, and in this one he has a catfight against a Russian cat – wait, I might have to sit on this idea, it is Hollywood gold), or “Artsy VI” (about six artists stuck in a room with only one brush, one pot of paint, and a lollypop) or “Try Visa” if they want credit card sponsorship, or “Try Avis” if they want sponsorship from car rental companies. Or maybe sponsorship from the Swedish crispbread sector and call it “Ryvitas”. Do it, Varsity people! This is our chance for some Flowery Twats style silliness.