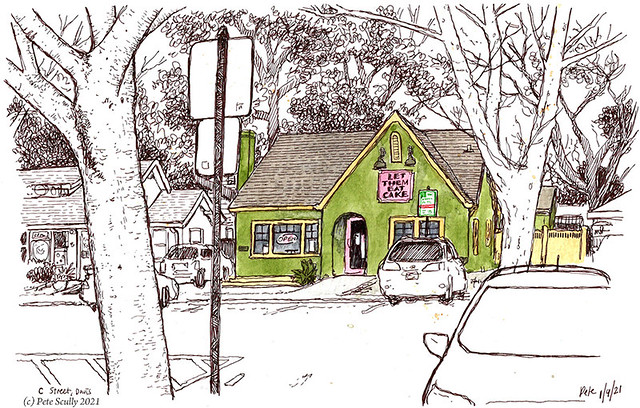 This is ‘Let Them Eat Cake’, they make cakes, and when you buy them they will let you eat them. It’s a good name, they are a well-known local business. Like most people I like cake, though I don’t eat cake very often. Birthdays, usually a good time. My favourite cake is probably a Victoria Sponge Cake, classic simple British cake with a layer of jam in the middle, and maybe some of that nice icing on top but that’s not really necessary. That and a cup of tea, yes please guv. ‘Let Them Eat Cake’ is a phrase commonly attributed to Marie Antoinette, headless Austrian wife of the headless French King Louis XVI. Of course the phrase has been translated wrong over the years, she was supposed to have said ‘Let Them Eat Brioche’ but most English people would have been like, what, eh, bri-what, what’s that fancy foreign food, I don’t know what a croissant is. So they said ‘cake’ instead. Or maybe, maybe the mis-translation goes deeper. Maybe it’s “Let the Meat Cake”, that is, “Let the Meat Brioche”, which when you think about it, that’s where we get Meat Loaf. And I do mean the singer. It could also have been “Let Them Meet Cake”, like perhaps cake was a person that they needed to met to discuss their grievances about food, perhaps his name was Monsieur Brioche, maybe the famous brioche was named after him, that’s a thing that happens, see for example the sandwich. Imagine if you will that the Earl of Sandwich was in charge of free school meals, and the king’s wife said that we should “Let Them Meet Sandwich” to discuss increasing the size of food packages for those in need, you can see how it would be mistranslated to “Let Them Eat Sandwich”. We’ll never know, we’ll never know. Of course there is zero evidence whatsoever that Marie Antoinette ever said such a thing, so all this silliness is just as valid as any purported historical fact. Of course Marie Antoinette wasn’t the only historical figure with a very-probably-made-up story about cake associated with them. King Alfred the Great, the King of Wessex who was on the run from invading Danish armies, famously burnt the cakes while hiding out in Somerset at a West Country peasant woman’s hovel. “Ok Alf I will let you stay here but can you watch these cakes while I just go and feed my goats? Cheers my lovely.” “Right, right, cakes, cakes.” (A few hours later) “Alfred what the hell! Seriously, you had one job, you’re like a chocolate teapot.” “I did wonder what that smell was. I thought it was my socks, I’ve not changed them in six months.” “Well you may as well take them, perhaps you can throw them at the Vikings, they are rock hard now.” “Good idea! I’ll throw them at the Danes! Let them eat cake!” “Good idea? More like a GREAT idea, amirite?” I imagine it went down something like this, but with a lot more alliteration and no rhyming. But Alfred the Great never let the cakes burn, it’s another old myth, but again one that doesn’t matter if it’s true or not. And these days, we have the Great British Bake-Off, which Alfred the Great would have been terrible at. Not being technically British for one thing, that being something different back in 870 AD, plus also being very bad with cakes. There was a show in America called ‘Cake Wars’ for a while, but I think it was cancelled because nobody could think of any good cake / war puns, though there are many to pick from.

Coming back to reality and away from ideas for Horrible Histories sketches, I drew this late in the afternoon shortly before it got dark, and it was pretty cold out, cold for Davis anyway. This was the short of sketch that I would have loved to have taken round to the pub to warm up and finish off there over a pint, but the pubs are all closed. This pandemic, man. I need a cake.