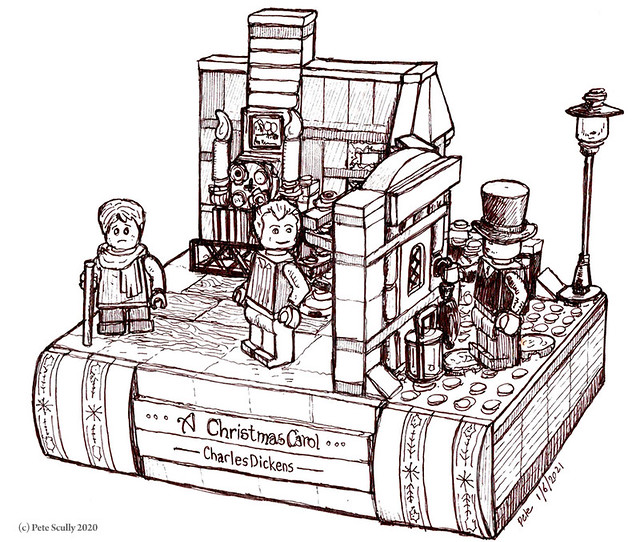 This here is my Lego “A Christmas Carol”, which I got as a Christmas present to my delight. In the run-up to Christmas this year we sat down each evening in the living room and read A Christmas Carol, which we’d never actually done before, aloud with hot chocolate and cookies and mince pies. I found it hard to read aloud with my mouth full of mince pie but I gave it a go, it’s what Dickens would have wanted. Dickens really stuck faithfully to the original Muppets version which was nice to see. While reading Scrooge’s voice I managed somehow to avoid doing a Michael Caine voice, and instead did something more along the lines of Harry Enfield and Paul Whitehouse’s Old Gits. We always watch the Muppets version on Christmas Eve, for us it’s the best one, and of course the Blackadder Christmas Carol. I like the Albert Finney one too. This Lego set then was a really nice surprise and I made it straight away to put on the shelf. I drew this (deciding not to add the colour) on January 6th, traditional last day of Christmas, after finally turning off the endless news of the bloody awful events at the Capitol. I still can’t really gather my thoughts on that as it feels like we don’t really know where this is going, but it’s so depressing. At times like this, getting the sketchbook out and furiously scribbling away feels like the best way to get through it. I have Lego to build though. I did start making a Christmas themed Lego animation but I was struggling to find the time to work on it (despite hardly ever leaving the house, it’s finding the ‘mental’ time) and now I’m putting the Christmas Lego sets away. But here is one final festive image for you, Han Solo on a tauntaun.

One thought on “humbug”