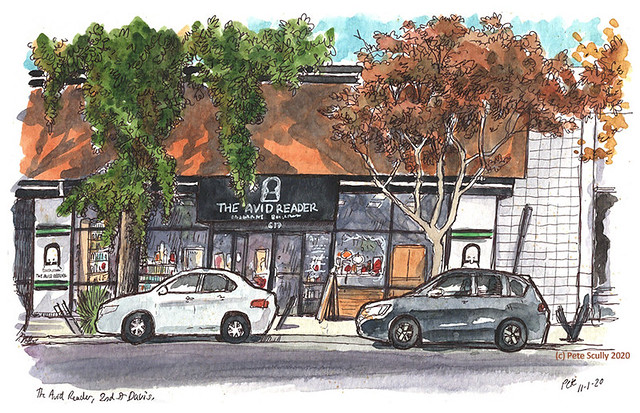 This is the Avid Reader bookstore on 2nd Street, drawn on the first day of November while stood outside the Varsity. It’s a great little independent store that has been around since the 80s, and I worked here shortly after I first came to Davis, at first as the book-keeper and in the shop, then just as the book-keeper, part-time. It was my first job in America, though I actually started full-time in my current department at UC Davis only a couple of months after starting here, so I worked two jobs for a couple of years, helpful while I was still paying a student loan in the UK (back then the dollar was so week against the pound, it was about $2.10 to the £ at one point; it’s about $1.30 now, for example). The owner of the store and my first employer in the US was Alzada Knickerbocker, and if you remember my post from about seven or eight months ago, she retired in February and sold the bookstore to a local family, the Arnolds, who’ve done well to keep the store with a very local community flavour, despite the massive hiccup of the pandemic. I do love the Avid Reader. Well I heard that a few weeks ago, Alzada sadly passed away. I was pretty shocked to read that, the last time I’d seen her was on that evening in February when she officially handed over the store. So I came down to the store on this Sunday afternoon, signed the commemorative book for her, and drew the shop. When I first started there Avid Reader also had a children’s bookstore in E St Plaza, but that closed and we moved all the children’s books upstairs in the main store, where they still are. When our favourite independent toyshop Alphabet Moon, a few doors down on 2nd St, closed down in 2013 Alzada took over the space and kept it as a second part of the main branch, keeping some toys in there along with travel books and cards and stuff. It is now called Avid Reader Active, and is still more of a toystore than a bookstore. It was at the Avid Reader that I learned about the Davis community, from speaking to locals and listening to speakers at various events, so I owe it a lot, and am grateful that Alzada gave me my first job over here. Rest in peace Alzada, and thanks for everything! And may the Avid Reader continue to thrive.