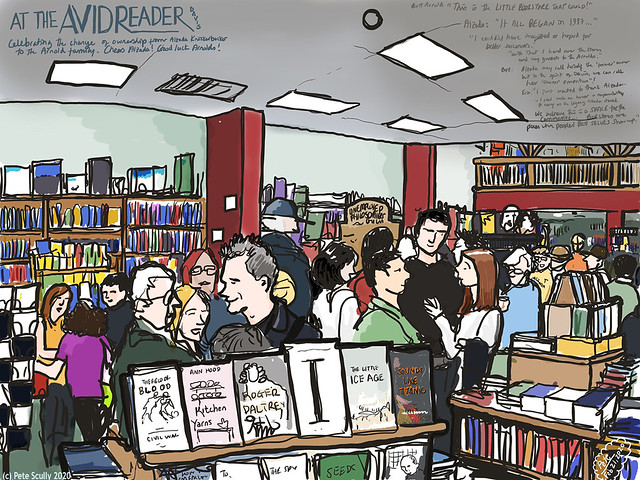 And so, it’s time to start catching up with 2020’s sketching posts. This one was done in late February, back in the golden age of being able to crowd together in close proximity to other humans, not knowing any better. This was drawn at the Avid Reader bookstore on a momentous occasion, the moment ownership of this long-time Davis staple passed from Alzada Knickerbocker to the Arnold family, a local family here in Davis. I of course had to go along. This was the first place I worked in America, Alzada was my first boss. I had two jobs here at first, partly working the store, and partly being the shop’s bookkeeper (which was the same job I did for a small independent bookshop in England before I moved out here). It was only part-time but it got me started, and shortly afterwards I started working full-time for the university (in the same department I am still working in), but I remained here on Saturdays and a couple of evenings per week, working at the little desk under the stairs behind a pile of Ingrams invoices. I hadn’t worked there since just before my son was born, so it’s been a long time, but I always popped in to say hello. I have been back in my official capacity as artist a few times to give talks or exhibit sketches. It was nice to go in and see Alzada off after all these years, and welcome in the new owners. I was surprised to see one of my old drawings of the shop in a frame on display at the counter, a piece of the history there. Unfortunately in less than a month the world was hit by the coronavirus and everything closed up, but they have been doing business and recently opened up again to the public, albeit with all the social distancing rules. But look at this, a crowded shop, with wine and sandwiches and people looking over my shoulder; we didn’t know, though we were being warned, but it wasn’t yet real to us. I had already been to hospital that month though – a couple of weeks earlier (on my birthday in fact) I was in the emergency room with a nasal infection that grew rapidly, and thankfully got under control within about a fortnight, but was pretty painful (as well as unsightly). In the hospital, which was pretty busy even pre-Covid 19, everyone was asked to disclose where they had travelled in the past few weeks, and hand sanitizer was doubled up, but this was still the pre-mask time, and since I was not contagious I was free to go to the soccer tournament the next day, full of people in close contact, seems hard to imagine now. I was heavily tanked up on medicine though, and exhausted much of the time, but our under-12 team did well and came third overall (though I think we had a good shot at winning it, we just missed out in the semi-finals in high winds to the team who eventually won it; still, a third place medal was a good finish). Our season was put on hold in mid-March, and eventually cancelled, including the Davis World Cup tournament which I was on the organizing committee for (I had spent a long time designing the logo! I’ll have to reuse it next year). This year has been a shame. But I am glad to see the Avid Reader is still going through all this, and wish the new owners the Arnolds all the very best in keeping this shop at the heart of the community, as well as wishing Alzada the best in a well-deserved retirement.