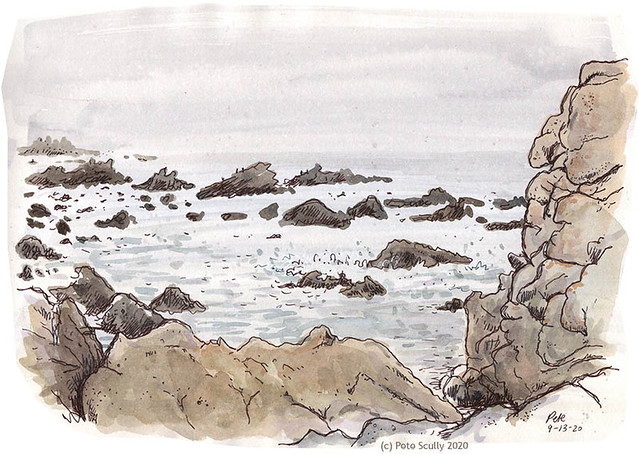 A few weeks ago we took an anniversary weekend out of Davis and down to Monterey. While the bigger fires closer to us had been contained or started to recede, other big fires in different parts of the state had created an even bigger smoke emergency, so this was probably the worst of all the poor air times in the 2020 fire season for us. San Francisco had the unforgettable Martian ‘orange sky’ day; further up the West Coast Portland and other cities were experiencing hazardous air conditions like we’ve never heard of. Probably a good time not to go anywhere. Or maybe, if we are just going to be stuck indoors, best to go and be stuck indoors at a nice hotel so it at least feels like a vacation. So we drove across the Valley and the Delta, and around the East Bay to the South Bay and everywhere was just dull toxic grey, like an apocalyptic waste, everything familiar hidden. We made it down to Monterey, and the thick smoke became mixed with thick fog. The AQI levels were still high, but slightly lower and damper now. Monterey will always have fog in September but we could barely see anything at all. We were staying in Pacific Grove, one of our real favourite places. As you can see from the sketch at the top, the fog was thick. I sat on the rocks along the coastline to draw. We even ate outside at actual restaurants, for the first time in six months, and that felt great. 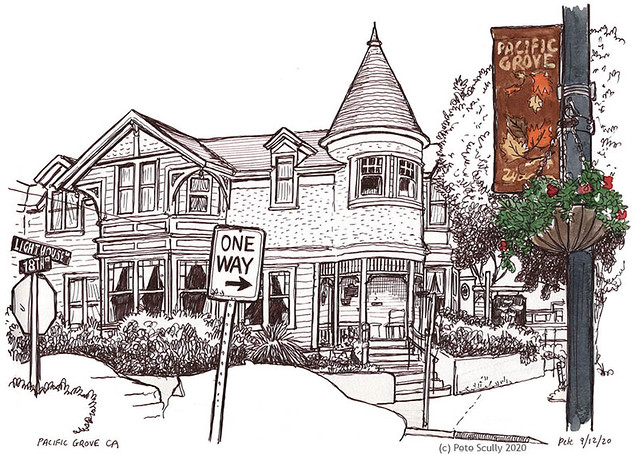 Pacific Grove is a charming town, on the top corner of the Monterey Peninsula. The houses all beg to be drawn, and I’m sure they get painted a lot. The air quality was good enough for me to go and walk about town and sketch, something I’ve been really missing in 2020. The sketch above is a hotel on Lighthouse. In the new social-distance pandemic reality I stood masked up out of the line of foot traffic or cars parking, the mask-steam on my glasses adding to the sea-fog and fire-smoke. I usually get over mask-steam on my glasses quickly, when I get a new mask it’ll happen the first or second time and then magically it stops as I adjust, but I find when I’m sketching that it happens more, because I look down a lot and it shifts things around. Still you need to wear the mask in Monterey or you get fined a hundred bucks. Nobody can use cash nowadays so I use that hundred bucks I am saving as an extra filter in my mask. 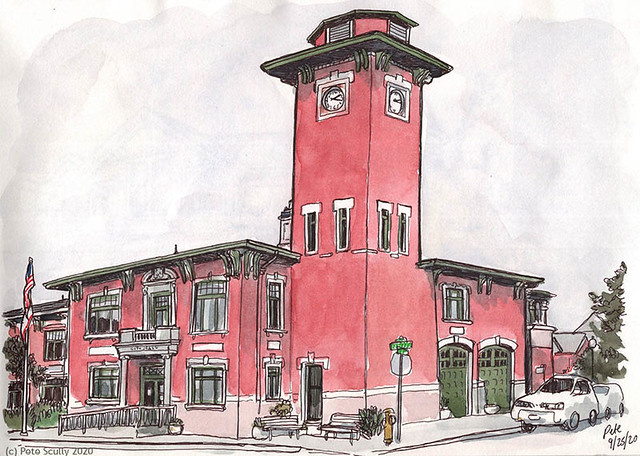 I don’t really, but if I did it would might me not forget where I leave my mask when I’m at home. Actually one place here did take cash only, this lovely delicious bakery called Pavel’s Backerei. We came here to pick up breakfast, and there was a line outside. The pastries were huge and delicious. They didn’t take cards though, so it was lucky I had some actual cash on me – I don’t normally carry any, but it had been in my wallet since before the pandemic, maybe as a souvenir of the past. The bakery was on the same street as this impressive town hall, so later that day I came back and drew it. It was an awkward one to draw though, the sort that seems like a good idea but is less fun to actually execute. I enjoyed drawing the hotel on Lighthouse a lot more. 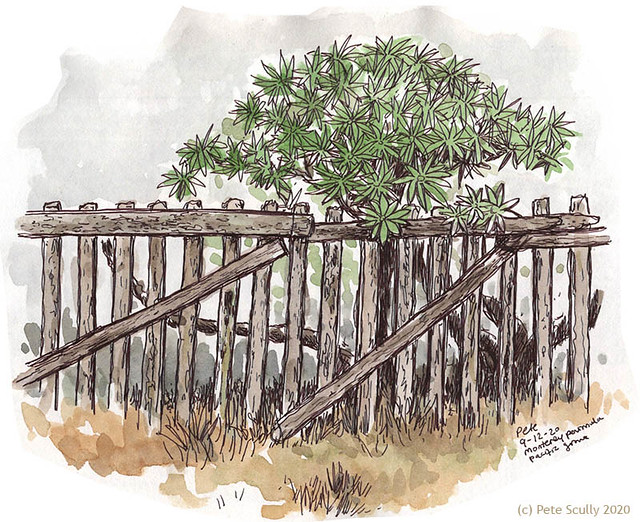 This fence was right outside our hotel window. We had a nice room, just a block away from the sea (which was invisible) and the lighthouse (which was now closed to the public). A lot of golfers around here, loads of golf being played. I suppose people really like golf, it’s never appealed much to me, but that might be all the stuff that surrounds it rather than the actual hitting a ball and walking over fields bit, which sounds alright I suppose. I’m not allowed to watch golf in our house (my wife actually enjoys watching a bit of golf) because I make too many golf based jokes or puns on the golfers’ names. I can’t think of any now, I actually have to have the golf on to activate that particular box, so I’m just not allowed to watch it, which is a fair way. So, I draw rocks instead. There are so many rocks, it was like a rock festival. Sat there with my sketchbook I might have felt like a rock god. But I didn’t; rock gods don’t have to fend off seagulls who are looking to make off with your paintbox. 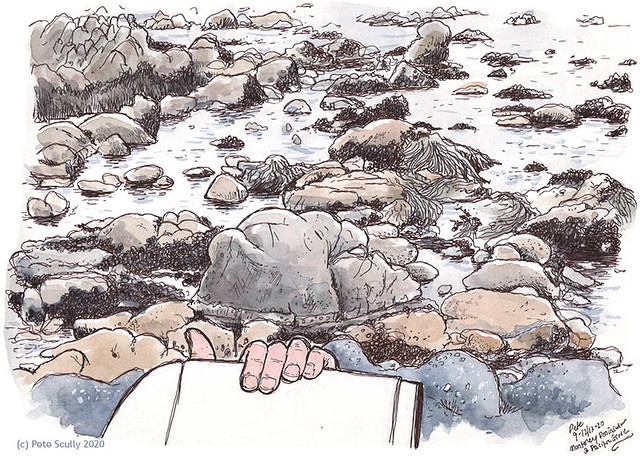 5 thoughts on “rocks and fog”