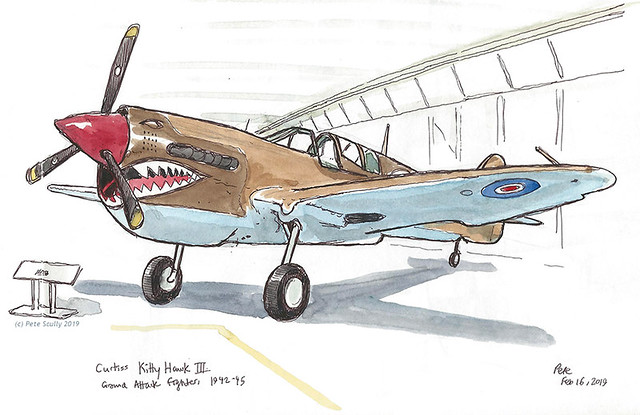 The day after arriving in London I joined with the London Urban Sketchers for their latest sketchcrawl, which was at the RAF Museum Hendon (in Colindale), which is very close to my family’s home in Burnt Oak. Despite growing up nearby, I had never actually been inside, not once. It was a lot larger than I expected. There was a very good turnout for the sketchcrawl, and I met a few familiar faces. I actually organized USk London’s first sketchcrawl back in 2012 when that chapter was founded, calling it “Let’s Draw London” after the Let’s Draw Davis sketchcrawl series I had started, and they have been going ever since, still monthly, in a whole variety of very interesting and diverse locations. There are so many sketchers in London who go out rain or shine. Of course this sketchcrawl was mostly indoors, and I was joined this time by my young sketching apprentice, my 9-year-old nephew Sonny. I had expected him to get bored at some point, as it was a long day of sketching, but not a bit of it – he could have kept drawing for many hours longer than the rest of us. He loved it, and he kept himself very busy, sketching eight planes and chatting away to the other urban sketchers. And he was very proud to get his Urban Sketchers London badge! 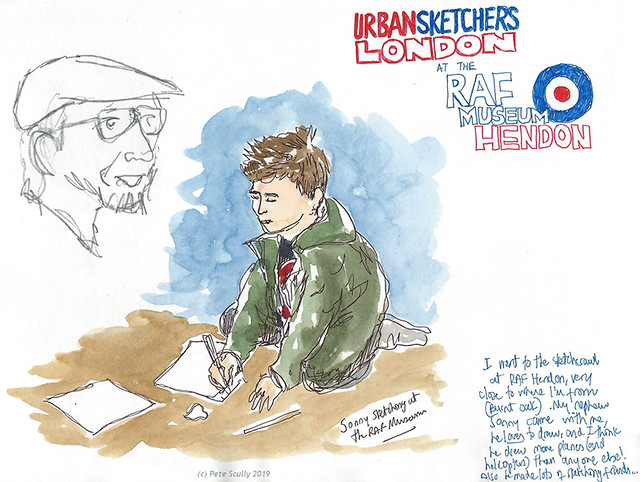 The first plane we both sketched was the Curtiss KITTY HAWK III, at the top of this post. With its painted mouth, this was an obvious favourite. We then moved on to draw a couple of others, the small red CHIPMUNK plane which is post-WWII, and had cool black and white striped propellers, which must have created a great effect while spinning. The sketchcrawl co-organizer John told me that he actually used to fly one of these, which was pretty impressive to me (I’m always impressed by pilots). Next to it was the golden yellow HARVARD, which I think was actually American but I didn’t read the label. Always read the label Pete, seriously! Someone did say to me, “well that’s the Harvard, which of course is American, because ‘Harvard’, see” and I kept thinking, well the university is American but John Harvard was from England, he went to school in Southwark, but I didn’t mention that because 17th century emigrants didn’t really have a lot to do with 20th century aviation and I’d sound like a twat. Also, I kept thinking about trying to use the word ‘mans-planing’ at some point that day, the situation where a man explains to a woman what aeroplanes do, but I didn’t have the imagination to seek that scenario out. Also, I have just realized that chipmunks have stripey backs, which totally planesplains the stripey propeller. See, who needs to read the labels?

I liked working on the perspective sketching these, vehicles up close is good practice. Below is the TORNADO, which is one of my absolute favourite planes. When I was in primary school (not far from here, at Goldbeaters), pupils were divided into four houses, which were if memory serves ‘Phantoms’ (green), ‘Jaguars’ (blue), Harriers (red, I think?) and ‘Tornadoes’ (yellow). I was in the Tornadoes. We would get House Points for all sorts of things, sometimes for sporting achievements (we would be split into our houses on sports day), but also good behaviour, good academic work, and other such things. If I recall I got us a few House Points for drawing, but not as many for sporting prowess (I was good at chess though). Anyway, that’s why I like Tornadoes. 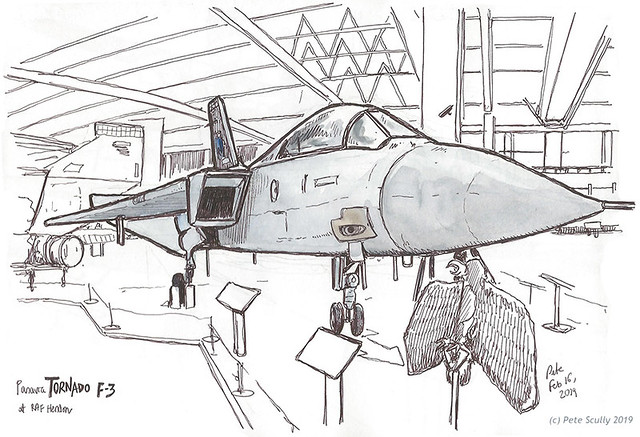 Quick five-minute sketch of the enormous Lancaster bomber, which I will definitely attempt again some time, it is an enormous flying fortress. It brought to mind the great flying battleships of Castle In The Sky, one of my favourite Miyazaki films. Also, the first part I drew was the round bit at the front, the one with the strange screaming emoji face on it. 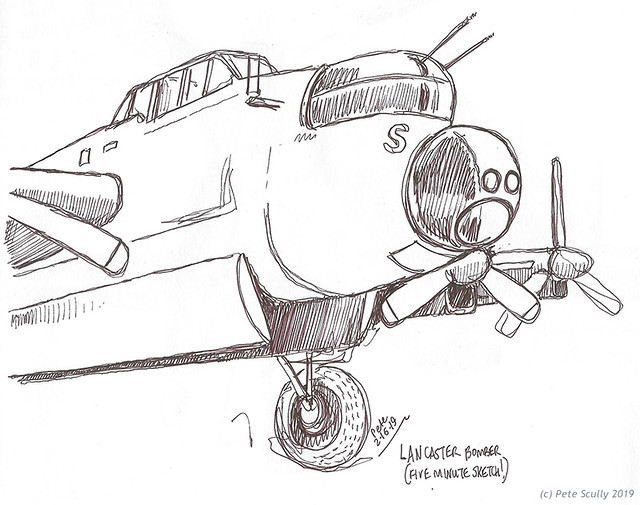 When I was a kid my older sister dated a guy named Neil Frogget for a while, and he worked at British Aerospace, as an engineer I think, he may have made the tea for all I know (I’m not very inquisitive, I never ask questions about what people do, I would have been a terrible journalist). When he came to visit once he brought me all these posters of modern British fighter planes, which I hung on my wall and tried to design new, faster, more weapon-filled versions. I was a little bit into jet fighter planes (yet ironically as a kid I was scared of flying, until I was 10 when I finally took a plane to Spain, and have been flying all over the world ever since). I loved those toy flying plane made out of cheap easily-breakable polystyrene with the little plastic propeller on the front, and they came in all models, the most sought after of course being the Spitfire. Yet I still didn’t visit RAF Hendon. The World War II flying machines were very much part of our local lore – RAF Hendon is at the site of the great Hendon Aerodrome, which spanned the area now covered by (the notorious) Grahame Park Estate, itself named after flying legend Claude Grahame-White. He had established a flying school here in 1911. Of course when we think of the RAF, you can’t help but think of its most famous hour, the Battle of Britain, and when you think of the Battle of Britain you of course think of the Hawker Hurricane, and the forever popular Spitfire. So my last two sketches are of those. By this point I started a new sketchbook, closing the Seawhite and starting another Stillman & Birn (“Sketchbook 32” in the new categorization). 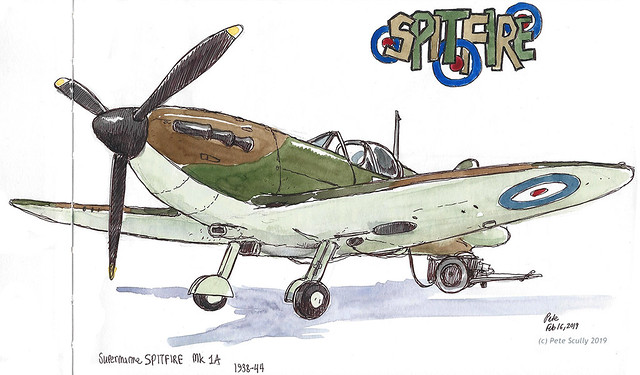 And here are some of the sketches my nephew Sonny did. He was really good at reading the labels and getting all the names right. He also wrote down the names of the sketchers he met so he could remember them when talking to them at the end (smart lad). Newest urban sketcher!

A fun time was had by all. I can’t wait to get back there sketching the planes again. I won’t have time this summer to organize another ‘themed’ London sketchcrawl, so it was really enjoyable to take part in this one.
The next posts of my sketches will be mostly London-themed. I did manage to get quite a lot of drawing done while I was back there, some of which needs finishing off with a bit of colour, some I need to draw little maps for, but I will be posting Davis sketches in the meantime. The trip was tiring, but energizing, and I’m expecting to keep the sketch-momentum going. First though, I have to get over the jet-lag…