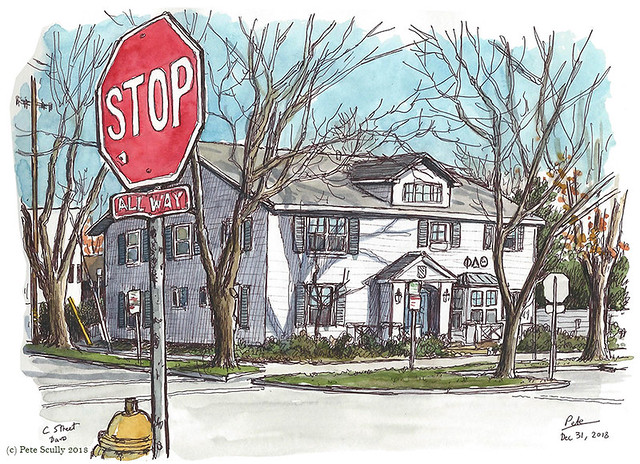 It’s New Year’s Eve! Look to the future now, it’s only just begun. I wish it could be New Year’s Eve every day. I don’t really do much for New Year’s Eve, but I do make a point to get out and sketch somewhere, no matter how cold it is. Here are today’s ones. Most sketching I’ve done in a month! My thumb was hurting, so I had to go light on the sketching. Still hurts but wanted to feel productive. I have been trying to teach myself to do digital illustration, the very basics, which has meant a fair bit of tracing as well. Feels very ground-level though so it was nice to get back to sketching, something I feel a bit better at. Bloody windy out today though. It’s 2018 being blown away. I’m not looking forward to 2019 (specifically March, when Britain leaves the EU with no apparent deal in sight), but it’s just numbers on a calendar. I think that it’s just the last year of an unknowable decade. We don’t really have an agreed name for this decade. The last one is sometimes called the ‘noughties’ which is a bit of a rubbish name, and I’ve heard this one called the ‘twenty-tens’ but that just isn’t anything. When we finally hit 2020, and the Twenties, we can get back on track. I’m still not used to being in the ‘twenty-first century’. It’s all just numbers on a calendar. The sketch above, drawn in the wind, C Street Davis. I drew this same building on New Year’s Eve four or five years ago, from a different angle. 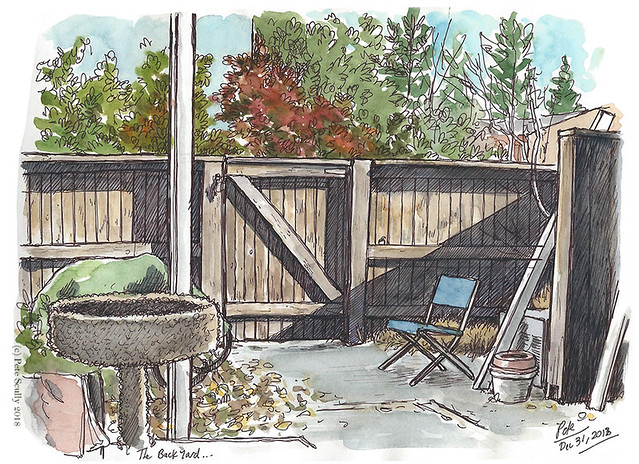 This is my back yard. Apart from the above, I’ve not left the house much this week. I did this before going out to sketch, as if to warm up, and listened to a podcast of Edgar Wright speaking to Adam Buxton, which was really interesting. I really liked that long triangular shadow sneaking across the back fence. New Year’s Eve, I don’t party on New Year’s Eve any more. When I was a kid my family always had a party, or if not us then someone else in our street. When I was in my 20s, I’d sometimes go out on New Year’s Eve, but I also remember the ones in my late teens when I’d just stay in watching Jools Holland and Rab C Nesbitt on my little TV in my bedroom, while drawing football kits. I ain’t changed much! 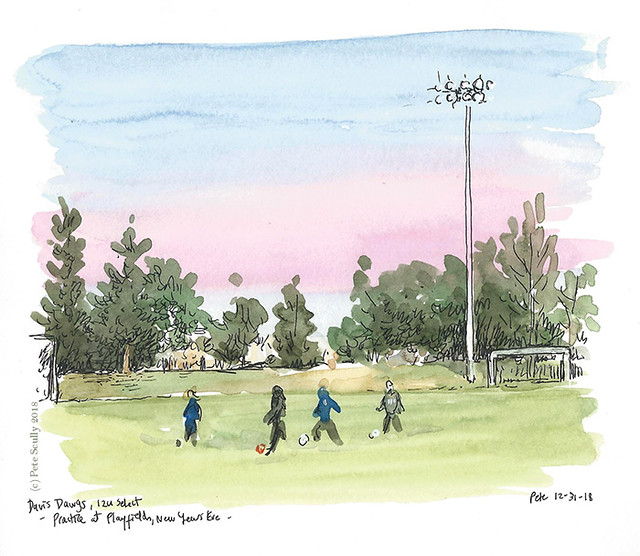 I did one last sketch, a quick one paint-first while the daylight drew to a close, and my son took part in a smaller soccer practice session at Playfields in Davis. It was cold, windy, brisk, but the boys were just happy to get kicking balls about. As I’m not coaching now, I was happy to just watch and sketch, though I did get cold.

I do have some more 2018 sketches to scan, maybe I’ll do those later tonight (party on!!), but I need to finish assembling the 2018 sketches grid. I do it every year. You may remember from last year (you probably won’t, that’s fine) that I have been doing more and more sketches each year. Here’s the post. Well, I can confirm that this year the sketch-rate went down again, and I could not catch up with 2017, not by a long way. Ah well. Happy New Year 2019!

9 thoughts on “the last few sketches of the year”