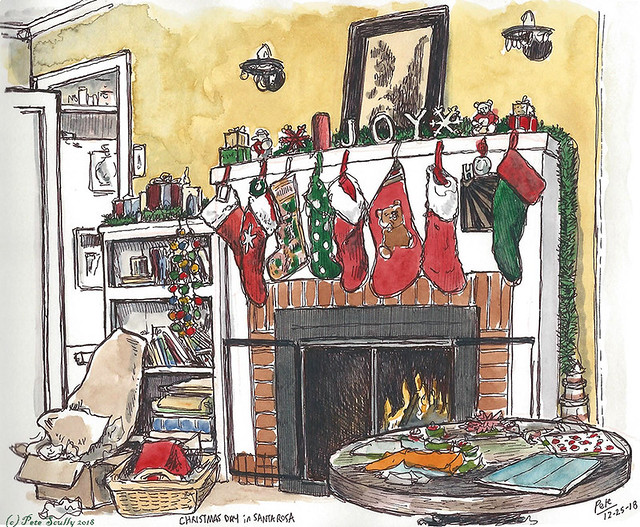 Christmas morning, we were up early, opening presents, calling England. Our morning pressie-time is about the time of my London family’s Christmas dinner-time. Then, time to go over to my wife’s family in Santa Rosa for Christmas Day. We have crab for dinner on Christmas Day in Santa Rosa, and I’m always the world’s worst eater of crab, it tastes great but I am such an amateur with the crackers. I did pretty well this year but I live for the broth, I love dipping the bread into that. We have brought the tradition of Christmas Crackers with us from England, along with the hilarious Christmas Cracker jokes. I say hilarious, I mean terrible, but British humour is different from American humour anyway. That said, my five-year-old nephew likes knock-knock jokes, and we always do the ‘interrupting cow’ version (“knock-knock / Who’s there? / The Interrupting Cow / the interruptin/MOOOOO!”) (I got that one from the Vicar of Dibley back in the 90s), and then many other variants (the one I like the most is the ‘interrupting rabbit’, because of course the rabbit doesn’t ‘moooo’ or anything but just makes a noise tapping its foot). Actually my favourite joke EVER sounds like it comes from a Christmas Cracker, but in fact it comes from ‘3001 Jokes For Kids’. It’s the only joke I remember from that book, which I got for Christmas when I was about nine or ten, and to this day is my favourite joke. When I first read it, by myself in my room, I laughed harder than I had ever laughed, and then laughed more. I still find it hilarious. What is the joke? Well if I tell you, promise not to laugh. Well I mean you can laugh at the joke obviously because it’s brilliant and funny, but just not at me for liking the joke so much. Ok, here goes, the best joke of all time, here it is, here goes.

“What is a polygon? A dead parrot.”

Isn’t that the best?! Many years later in America someone made some reference to the Monty Python Dead Parrot Sketch being their favourite bit of British humour, and yes it is very funny, the Pythons are my favourites, but it’s not even the funniest dead parrot joke. Polygon is the funniest dead parrot joke. I remember doing maths at school and we had to do shapes and someone used the word polygon, and I laughed so much I had to go to the toilet. When I was in my late teens I visited Strasbourg and the lycee was close to a street called the ‘Route du Polygone’ and every day I would see that sign and laugh so hard, and I tried the French version of the joke, “Que-ce que c’est un polygone? C’est un perroquet mort!” The joke didn’t necessarily translate directly but they laughed at me anyway, and pointed a lot, which I think means it was extra funny. Strasbourg being historically part German I would sometimes impress people with the German version, “Was ist ein Polygon? Ein toter Papagei.” Again the humour isn’t necessarily transferable but I like to think that what I mistook for confused silent stares were in fact their way of saying, wow what a joke, das ist really cool, Pete ist sehr lustig. 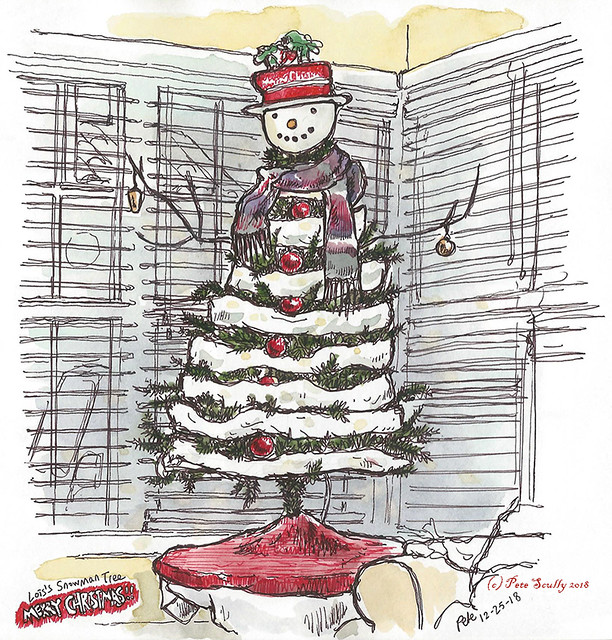 Let’s move on from the world’s funniest ever joke (if you are finished laughing about Polly being ‘gone’, if not, take your time). Above, I sketched my mother-in-law’s Christmas tree, which this year was dressed up as a snowman. The hat actually has a history, it was brought over from London by my mum over ten years ago and left at my mother-in-law’s in Santa Rosa, and before that my mum actually got it from my uncle in Belfast, so the hat has a long well-travelled history. I like this snowman tree, and I sketched it while we watched the Water Horse, that movie set in Scotland with the Loch Ness Monster. It reminded me of the Family Ness, that was a cartoon I liked as a kid. Not as funny as the polygon joke but amusing nonetheless. I nearly drew a cartoon many years ago about fish living in a Scottish loch called “Under Loch And Quai”, with a kind of Porridge-like cell-mate dynamic to it, but while the little fishies were fun to draw, I had no actual material other than trying to work in the polygon joke, which doesn’t really work when it’s a cartoon about two fish, because (a) they wouldn’t understand what a parrot is, what with fish being entirely water-bound, and (b) parrots not exactly being aquatic nor common in Scotland. To the underwater community, “Polly” might well be a common name for a frog, for all we know, what with a ‘pollywog’ being another name for a tadpole, albeit more common in America than rural Scotland. So a better version of the joke for two fish to say would be “What is a Polygon? A dead frog.” And you can imagine, this might make two fish roll about in hysterics, but would have us humans just shrugging our shoulders. Maybe humour isn’t as translatable as we think. The only joke I could think of for this cartoon was another one which I may have read in 3001 Jokes For Kids, I don’t remember, but it goes as follows:

FISH 1: “Why are you swimming under the pier?