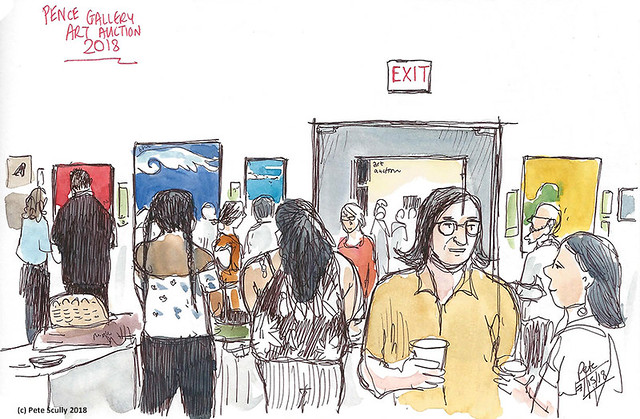 This year I had two pieces in the Pence Gallery Art Auction, a drawing of St.James Church, Davis, and another of the Turtle House on 2nd St. They didn’t sell this time, but I did get to attend the Gala event. They always have nice food and drink there, and you get to talk to local art people you may or may not have met before, so I went along for  an hour and a half and looked at all the nice artwork, and then did a sketch. It had been a busy day. In the morning our under-12 AYSO team, playing with fewer players than our opponents (who were a really good team), came from behind three times to win, which was exciting and especially nice after I had woken up at 4:30am to watch Tottenham lose to Liverpool. Then I spent the afternoon watching other AYSO games, scouting teams and watching players I used to coach, before we headed to Sacramento for a party thrown by my father-in-law. After that I went to the Pence (see above) and then back home for some rest. I was totally exhausted by this point.