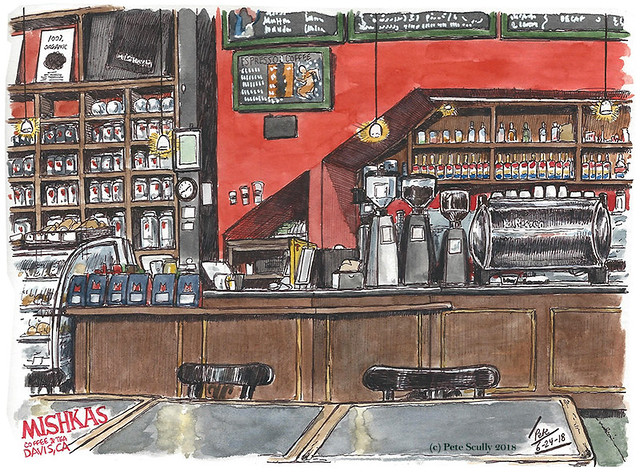 This is the interior of Mishka’s Cafe on 2nd street, Davis, as much a staple of Davis life as anything. I don’t actually come here very often myself (I don’t drink coffee, though of course they serve more than coffee) (I never drink tea other than at home, except in England where it’s just how I like it) but a lot of people do. It opened in 1995 in a different location, and I sketched there on the very first sketchcrawl I ever went on in Davis (December 2005, wow). That spot closed when Mishka’s moved a block down the street to a new building next to the Varsity, where the old tank house used to be, opposite the Avid Reader. I’ve never sketched in this newer location (though I drew the outside in 2012). As I say I don’t drink coffee but I do drink lovely fruit smoothies, and I had a delicious mango smoothie, followed by a very sweet wild berry smoothie (bit too sweet after the mango one). It was a Sunday evening, I had been stuck in the house for the whole weekend and needed to get out for a bit, and draw something in my sketchbook. It was not crowded there. There are still a few places I want to draw the interior of here in Davis. Tres Hermanas has a really interesting vibe, while Our House has one of those big mirrors I like to draw the reflections in. I have gone to Woodstocks Pizza to draw before but ended up leaving because I couldn’t settle into a good spot, and I wanted to draw inside that Italian restaurant over near Olive and Richards but I think it has closed now. In this hot weather, I’m on a quest for some interior sketching.

Below is a sketch of Mishka’s previous location, from over 10 years ago! There is fellow Davis sketcher Alison Kent. This was an earlier Davis sketchcrawl. I had a wild berry smoothie that day too. 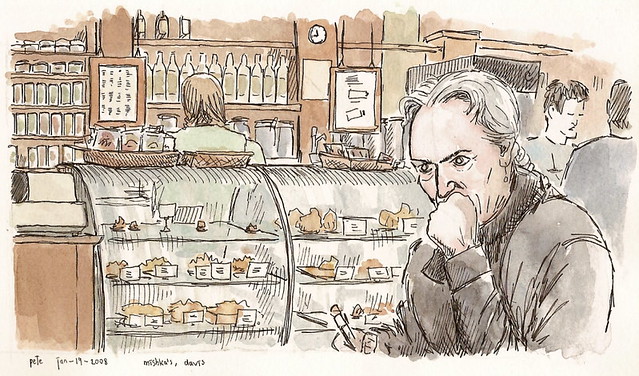