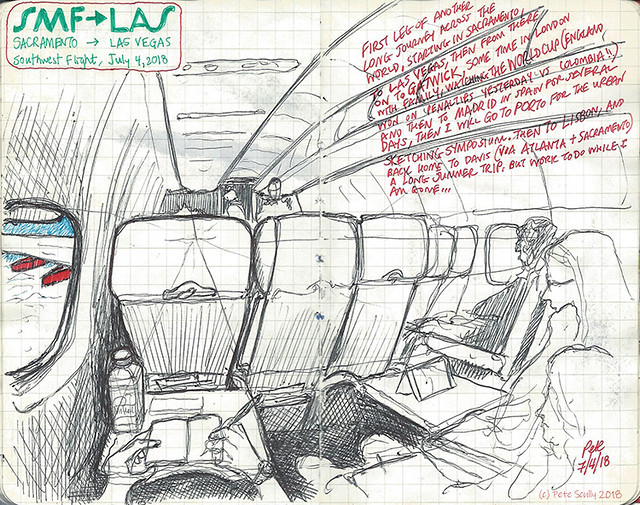 Sketching on a plane helps me relax. That is my excuse for sketching on a plane. I have this book, this little Miquelrius book that I use for in-flight sketches (the one with the Lapin-designed cover), and I brought it with me to record all six flights (and one train journey) on my trip to Europe. Twenty years ago I took a five-week train trip around Europe and I really wish that I had done the same back then. Sketching all the night trains. Pete of 2018 would definitely have enjoyed that, Pete of 1998 would perhaps not so much, but Pete of 1998 was so much easier with speaking to strangers and making friends with fellow travellers than Pete of 2018. Pete of 2018 is a little shyer, but makes up for it with readiness to sketch. Pete of 1998 did sketch a little but not much and very loosely, though he drew a lot of cartoons and wrote loads, writing like there was no tomorrow; I kept two diaries on that trip, one for me personally, written small and densely, and one with just briefer notes about the train journeys and cities, at the back of the special book I had prepared ahead of the trip. Wow, this was going on 20 years ago now. I will need to write my thoughts about that trip very soon, it was a pretty formative voyage for me. Anyway, back to this summer’s Euro trip – not as many countries, but still a fair bit of travel, and probably more miles covered (what with flying across the world and all). Above, the first leg of the journey, flying from Sacramento to Las Vegas on a very bumpy flight over the desert. I liked stopping in Vegas, we got to go to an amazing lounge (my wife organized that, she knows the best stuff), though my son was less impressed with Vegas, thanks to the turbulent descent on the plane. Soon we were off again, flying Virgin from Vegas to Gatwick. 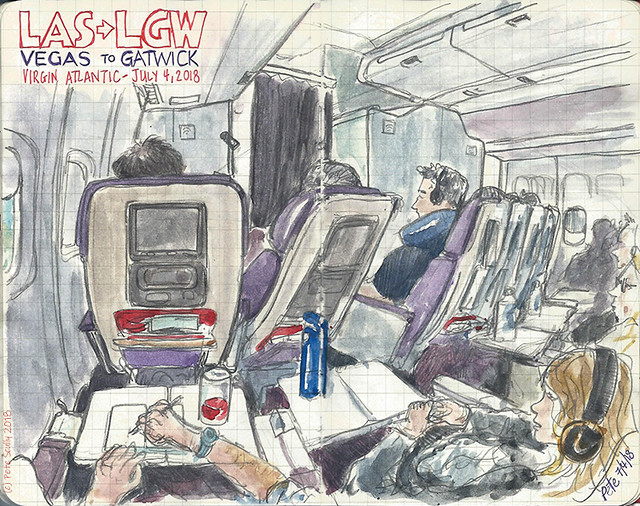 I drew this one in pencil. I am trying to use pencil more, for the looser scenes. My son and I played a few rounds of MarioKart on the 3DS, and we couldn’t wait to land in London, where it was hot and sweaty and the trains weren’t all running, so we squeezed onto a train to Mill Hill. This time we were travelling light, no large bulky suitcases, I didn’t even bring the backpack carry-on. I could have probably travelled even lighter. I didn’t need the second pair of shoes (my main ones were so comfy), though honestly I should have brought more underwear. That whole washing in the sink thing in Portugal really didn’t fly for me, so I ended up buying some, wait for it, Cristiano Ronaldo brand underwear. Yep old CR7 has his own line of pants and socks. 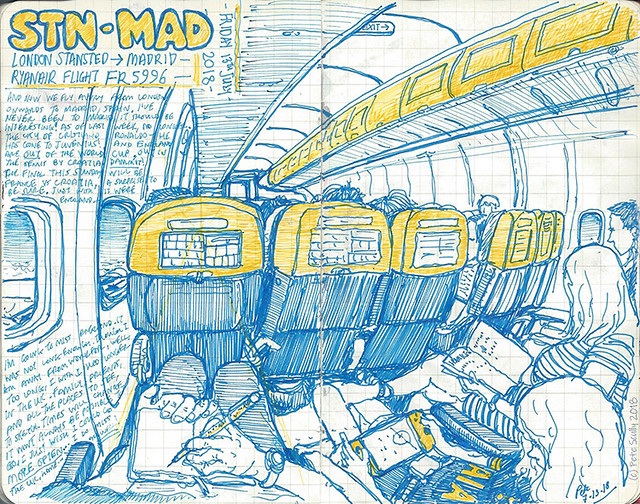 Well England was fun, it flew by, but then it was time to go to Spain for a few days in Madrid. After getting the coach from Golders Green on Friday the 13th, we flew Ryanair from Stansted (fourth airport on the trip) to Madrid (airport number five on this trip, oh I love airports, don’t you know). There’s my son playing FIFA. We were sad about England losing the semi finals a couple of days before, but excited for the World Cup final. We were still humming tunes from Hamilton, which we had watched in London the night before (amazing show). I’m always sad leaving the UK, excited about going to other countries but there’s always that sense of loss when I go, it changes a little bit more every time I return. 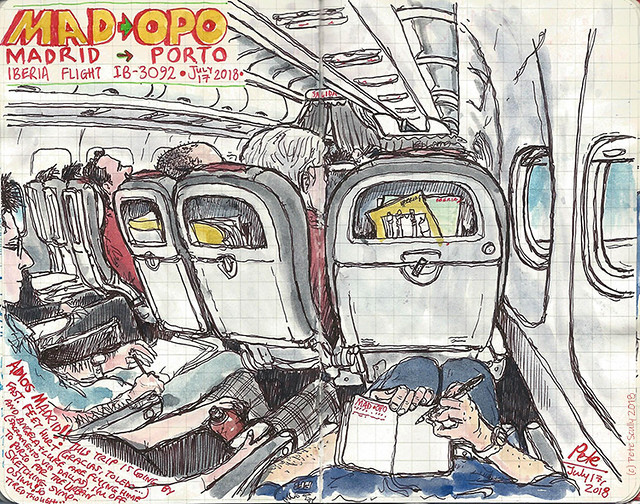 Wow Madrid flew by, eh! Eating dinner late, getting up early, going to the Bernabeau, visiting Toledo. The family flew back to America from Madrid while I went on to Porto for the Symposium, flying with Iberian. Airport number 6. Porto airport was really nice actually, though I took ages leaving it as I decided to hang about and get a shuttle that would drop me off miles from where I needed to be, and I got lost in a neighbourhood of tiled houses and steep hills, smart move. Note to self, get a larger map next time. Or a taxi. Ah, you know, I love to wander, I am an explorer. Not much of a navigator though. 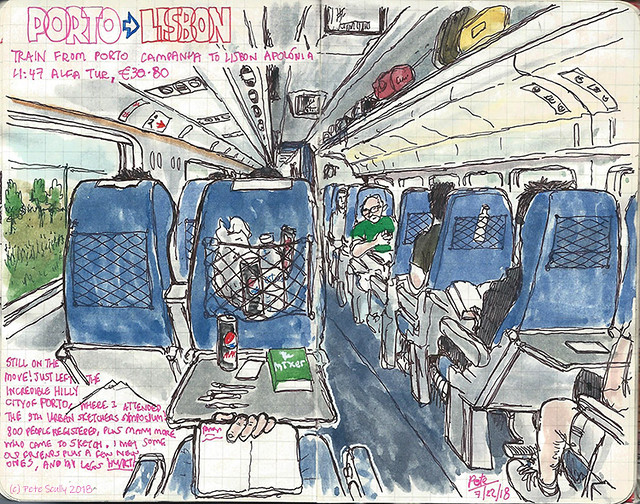 Many many sketches later, many many hills later, I took the Alfa Pendular train from Porto to Lisbon. That is the fast train. It zipped along the Atlantic coast for a bit, the fog hanging out there like a large grey Nothing. I do wish I had spent some time on the Portuguese coast now. There is so much Portugal to discover. So much World in fact. I want to go Everywhere. Well maybe not everywhere, I could give probably places like Swindon a miss (sorry Swindon, I’m sure you’re lovely) (I would probably like Swindon actually, there’s a historic Ossie Ardiles/Glenn Hoddle connection). I have my tall thin Pepsi Max can there. I was so worried about being hungry or thirsty on the two-and-a-half-hour train ride that I got a load of snacks at cafe in the station. It’s funny cos when I travel I will sometimes go from breakfast until late dinner without eating a bite (I often don’t get hungry when I’m busy sketching), but put me on a train and I’m anxious I might go crazy if I don’t eat a Mars bar. 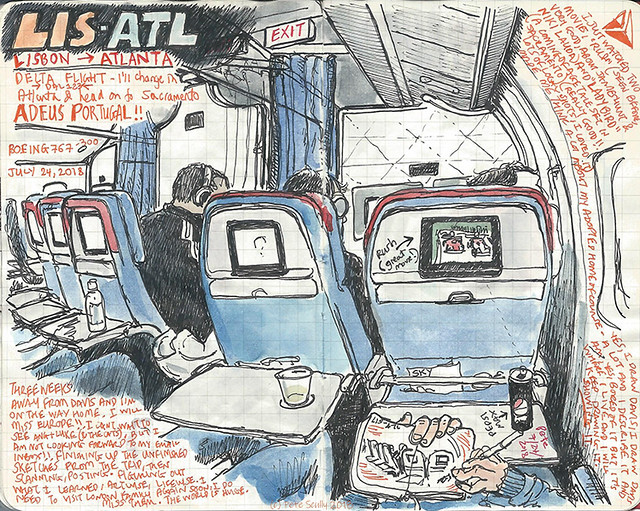 Lisbon was relaxing, the hills much less stressful than Porto, and my hotel was amazing. I could have spent most of the time just chilling out there. I met some sketching friends in Lisbon on the last evening for dinner, and it was a nice way to cap off a long trip. And then, back home. Lisbon (airport number 7) to Atlanta (airport number 8) on Delta, which was a really nice flight actually, I would fly them again. Once more I got as many snacks and ate a bunch of food getting on the plane, prompting my seat neighbour to cheerfully remind me that they will be feeding us. I had never flown Delta before so sisn’t know how much that would be true – airplane food can sometimes be a bit rubbish – but it certainly was true and their food was really good, and plentiful. I had a good chat with my neighbour too, interesting man who flies a lot and works in DC. On the flight I watched Rush (that movie about James Hunt and Niki Lauda, such a fun film), and Lady Bird, the one set in Sacramento, which I really enjoyed and it made me a little yearnful for my adopted home. Well, a bit. The flight was good and transferring in Atlanta was fairly painless. 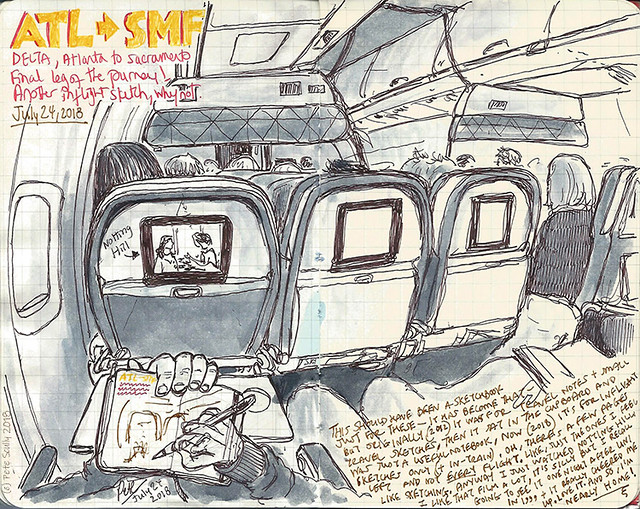 And so from Atlanta back to Sacramento. I was sat next to a tall man who didn’t mind me jumping over him to use the bathroom the one time I needed to. I often don’t need to get up at all during a flight, which is why I like the window seat (or the very middle of the middle row) but on this occasion I did. It was a long journey back. I watched Notting Hill, which I’ve not seen in years and still makes me laugh. I landed in Sacramento exhausted, happy to see the family again, but missing Europe and vacation time. My head is still somewhere over the Atlantic I think, though my feet are finally returning to Californian soil. Travel is great; air travel is annoying and stressful, but sketching on a plane helps me relax. Or that’s my excuse anyway.