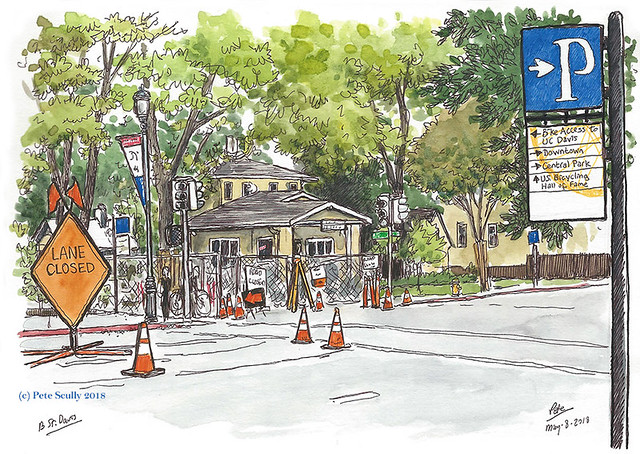 B Street, Davis. The corner of 3rd and B, to be precise. 3rd Street is undergoing some big changes. I can’t tell you what, but it’s exciting. I can’t tell you what, because I can’t remember. I did read a big sign detailing it all but I can’t be expected to remember that stuff. I can’t remember what I had for breakfast most days. Actually that isn’t true, it’s just one of those things busy people say to excuse their forgetfulness. No, I always have either a chocolate croissant or maybe a bowl of cereal. Sometimes I skip it altogether if one of those things is not available. I have been known to have a Twix from the vending machine if I am really stuck. Cornerstone of any nutritious breakfast. I eat junk food, yes I do. That building across the street used to be Cioccolat, speaking of chocolate goods, it was a cafe that had chocolate things, I think so, I don’t remember ever going there. It’s something else now. I don’t know what. I’m not very good at this am I, I should be detailing huge local knowledge but well, knowing things is uncool these days. Do you remember at school when the teacher would ask a question and you knew the answer but you would not raise your hand because the Thick Kids would hit you when the teacher wasn’t looking (or even when they were)? That’s where we are these days, it feels like. Except we don’t need to know everything, because we can Find Things Out instantly with our Devices, and those Things may or may not be even be Real. “Knowledge Is Power, France Is Bacon”. Smart Phones? Why can’t we have Thick Phones? Sorry, you have to say it in a Norf London accent, ‘Fick Fones’. To activate it with voice command you shout “oi!” and when you ask it a question it replies, “you wot? you takin’ the piss? come on then!” No, Fick Fones will never catch on. (Or maybe it already has and is called Facebook?) I do remember fondly those conversations at school though, I remember I was talking with one kid in science class once when I was about 12 and I said something along the lines of, “well it’s all relative, innit” and he gets all angry and starts going, “you takin’ the piss? woss my family gotta do wiv it?” Ah school days, they were such blissful times. I could be pretty monumentally dim myself sometimes though, so it all evened out. One time I handed in biology homework, which was supposed to be an essay based on explaining to an alien from another planet what the difference between cars and living creatures was. I didn’t write an essay, just the line “it’s probably a bit like your spaceship.” That may have not been what they were expecting. I thought it was so clever. God knows I could have warbled on nonsensically, I think they got off lightly with that concise (cocky) answer. My friend Tel once did something similar in history, answering one question that referred to “all four corners of the globe” with “globes are round, they don’t have corners” which to be fair is pretty true, and has remained true ever since. Nowadays though you get the Flat Earthers, which really are a thing, and if you should ever chance down that particular avenue of wisdom, I warn you that it is time you will never, ever get back. At first glance their argument appears to be the classic example of of wilful anti-knowledge and anti-science, but when you taker a closer look, the only honest response to all that is “you wot? you takin’ the piss?”