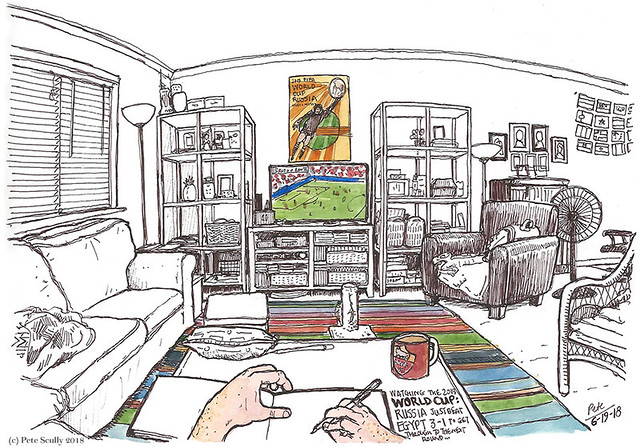 I hope you are enjoying the World Cup. Here I am in my living room, watching Russia beat Egypt 3-1, the big World Cup poster hanging above my TV. On the wall to the right I have all of the flags on the wall arranged by group, mosaics made of paper, my son and I made many of them for the 2014 World Cup, he didn’t help me make any of the new ones though. I like this World cup, I’ve had a lot of 5am wake-up calls for kick-off, but World cups in their early group stages are still full of hopes and maybes, before the rot sets in. Still some room for excitement and apathy. Soooo…my pre-tournament tip of Argentina winning it? Yeah, they drew 1-1 with Iceland and lost 3-0 to Croatia. I think Argentina’s formation was one big sad face, Messi’s certainly was. Time to break out the “Don’t Cro For Me Argentina” headline. (“Messi Argentina Taken to Cleaners.” “Hrvat’s Going On?”). No 0-0s yet, thankfully, but 1-0s aren’t any more exciting. Goals can be overrated, a good contest is much more fun. I’m glad England won their opener, Harry Kane doing what he does. I feel bad for the North African teams all going out early though. Oh yeah, Tunisia aren’t out yet, but they have Belgium next and the Belgians are looking good. I could go on, but I have had two very long pre-World Cup posts already. I’m enjoying this Russia World Cup, teaching us all a bit more about Russian geography, and the hosts have had a good start, less Russian bots and more Russian boots. The TV studios backing onto Red Square with St.Basil’s in the background look amazing. I had a pen-pal from Moscow when I was a teenager, so many years ago. I remember going to see the Hunt For Red October when I was about 14, and not enjoying it, I left before the end because I was bored. I’m not sure what I was expecting. Big nuclear explosions probably. Maybe there were a few last-minute goals I missed, I don’t know. I never watched it again and don’t want to, I like the mystery of not knowing what happened. Also, I don’t remember anything that happened during the movie anyway. It was no ‘Back To The Future 3’. 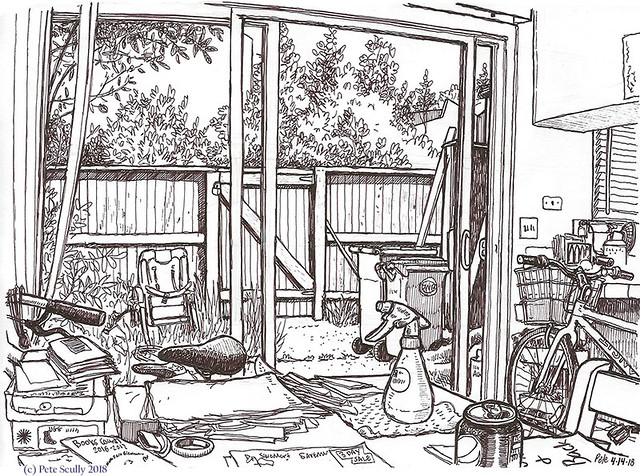 Here are a couple of sketches (two months apart) from our dinner table, one looking out to the yard, the other to the kitchen. Fun penwork. The one above was done in the afternoon with a Pepsi Max (or rather, ‘Pepsi Zero Sugar’ as it’s called now over here), while the one below was done in the evening and a glass of Portuguese wine. I am going to Portugal this summer for the Urban Sketching Symposium so wanted to get an early taste. It’s Vinho Verde; I’ve never actually had Port wine, not sure what I would make of it. They tell me it’s a dessert wine, good with cake. When I was last in Lisbon the only thing I saw locals drink was Super Bock and Sagres beer. I’m also reading ‘Futebol: the Brazilian Way of Life’, a gift from the Brazilian family whose son was on our U10 soccer team this year. We were the Davis Spurs (naturally). I’m enjoying the World Cup, by the way. I ended up getting the Argentina away shirt, but I was given a Brazil away shirt along with this book so I’m wearing both of those this year (as well as wearing my 2010 England away, my 2014 France shirt and my 2016 Belgium top; I just like good football shirts). 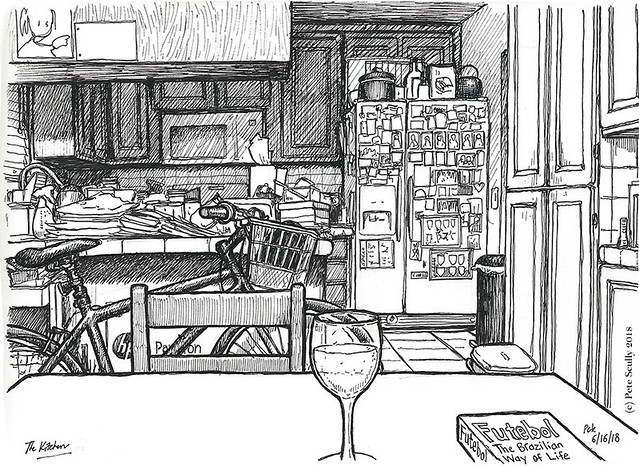 I might get a new dinner table. The chairs are getting a bit wobbly, despite frequent retuning with the allen key. That vinho verde was very nice. I’m enjoying the book.