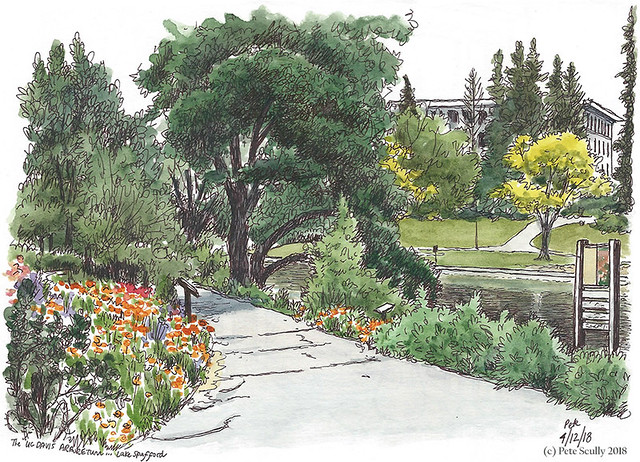 This was two months ago now, more than that, but the view probably hasn’t changed so much. That’s Mrak Hall across the water there, occluded by the trees, while I am in the Arboretum of UC Davis, in the shade. This year is whizzing by. The news every day is just an endless stream of avoidable depression, the inbox a constant flow of to-do-nows, and the sketchbook is a little less used than last year as I struggle to fit it in (not to mention finding new things to draw). Spots like this are a great escape. I don’t know what it is about the calming effect of water. I used to love to go and look at the Thames, that would be my escape back home. The year I spent in Belgium would often be a struggle to stay motivated, and I remember one day going to the coast, and watching the sun set on the beach at Ostend, and feeling generally mentally restored by the North Sea, just by looking at the silvery waters, just looking. Of course then I got a train to Antwerp and spent the rest of the evening exploring old watering holes, which was restoring in its own way. I did a lot of exploring when I lived in that small country. I wonder if ducks do that, if they ever get really stressed out by being a duck, to they go and just look at a field. The world is moving along so fast. These colourful flowers may well be gone now, and the summer heat is already starting to pour across the valley. Look for the good while it is still there, and feel it, and remember it. Right, that’s done, now back to work.