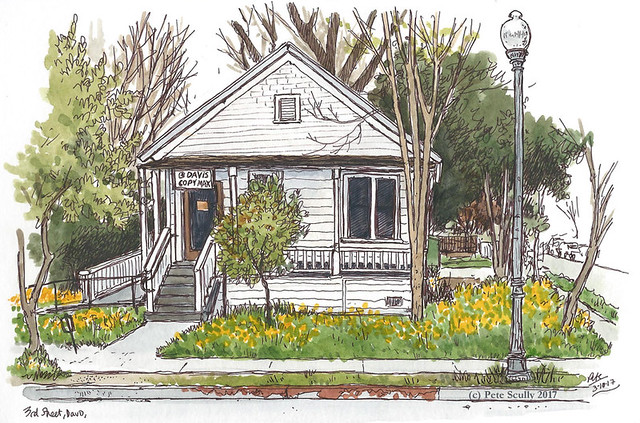 This is actually one of the oldest buildings in this whole city. Hey, I did a sketchcrawl based around sketching the oldest buildings in town a few weeks ago, I will post those sketches very soon. But I wanted to post this one first, by itself, because this little building so easily gets overlooked, walked past, forgotten, but in fact it was built in 1870 and is one of Davis’s oldest buildings. Davis itself dates to the 1860s, when it was called Davisville, built on the former land of ranchers Jerome and Mary Davis. Ok, I’ll give you the history lesson in the post about the sketchcrawl, because I drew a map. This place though is called the Eggleston House, at 232 3rd Street, a block away from campus. It predates many of the subdivisions and lots in old Davisville, and takes its name from Lucy Eggleston, an resident from those early days who was also a leading member of the Women’s Christian Temperance Union. So there you have it. 1870! That’s actually very old. There are countries which aren’t that old. When it was being built, the Franco-Prussian War was being fought. Also in 1870: Charles Dickens died; so did Alexandre Dumas; The Chicago Baseball Club (later the Cubs) played their first game; so did the English and Scottish international football teams; the fireman’s pole was invented; Lenin was born; and Christmas was declared a federal holiday in the US. 1870! It’s now home to ‘Davis Copy Max’, which I presume has something to do with copying. Those yellow flowers, you see those everywhere in Davis in the Springtime. Well, this little building has lasted a lot longer than Lenin.