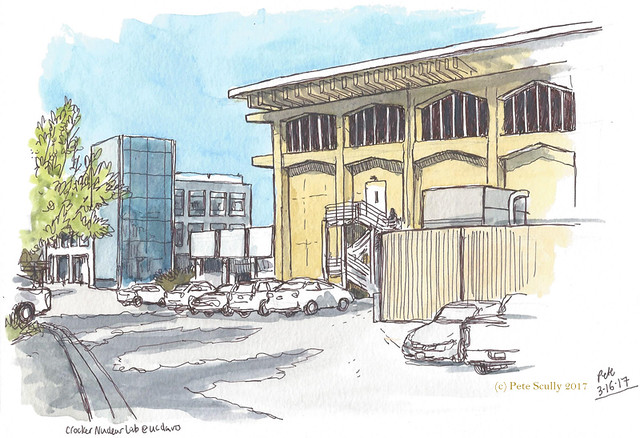 This is the Crocker Nuclear Lab at UC Davis, which is located right next to where I work, so I didn’t have to go very far for my lunchtime sketch. The building itself is called John A. Jungerman Hall, but the lab has been home for the past 50 years to incredible machinery such as the 76-inch isochronous cyclotron. I know, right? Ok I don’t know what that is but it sounds great. I’m actually very interested in particle physics. I’m quite particular to it, no that doesn’t work. I like listening to podcasts and watching TV shows about particles, the old bosons and quarks, all the particles, they’re great. I do sort of understand it, for sure, but I think I just like hearing all the words being said, I like to know someone is out there doing the science. I loved physics when I was a kid, I wasn’t very good at it but it was such an exciting science (conversely, I got great grades in biology but was always bored with it) (we don’t talk about chemistry though. I was scared of the Bunsen burners). Except I had a teacher called Mr Vilis, who I always liked, but he would get very angry if anybody opened the window in class if it was hot, he would go and furiously slam it shut. He did do a very good turn as the Laughing Policeman at a school show one year though (along with my form teacher Mr Singer) so I always knew he was a joker at heart. I do remember the Van Der Graaf Generator in his classroom though (I’m probably getting quite far from particle physics and radiation now I think), making our hair stand on end. Not exactly a hard trick with me, my hair always stands on end, it’s why I keep it short. Van Der Graaf Generator were a really good band back in the day, I say really good, I only knew one song but I did meet one of the band members when doing a thing years ago at Union Chapel with Shape Arts. I remember telling him, oh wow I’m a really big fan, but only of that one song, which I heard recently on a compilation album free with Uncut magazine. So not a really big fan then. But I would be because I like your band’s name, because I like physics, event though I’m not very good at it.

So anyway this is the Crocker Nuclear Lab at UC Davis, home to the cyclotron (which you can learn more about at cyclotron.crocker.ucdavis.edu), and I’ve walked past it every day for over a decade, so here it is. Well not every day obviously, I do have weekends off, and vacations, and half the time I cycle, not walk…etc etc

One thought on “a crocker full of nuclear”