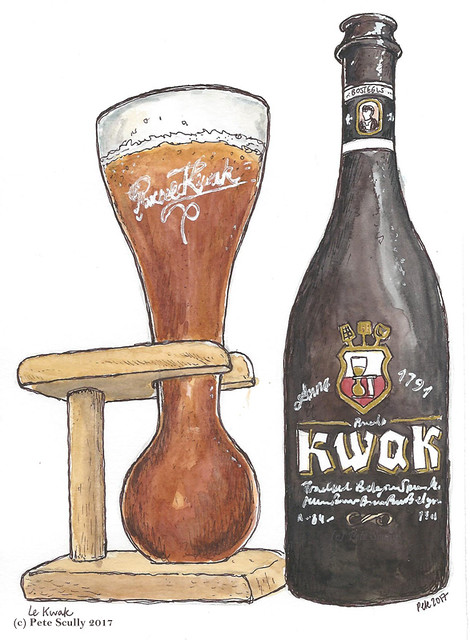 Kwak! A beer I very much enjoyed when I lived in Belgium all those years ago (can I go back there again please, just for a few days, please? I miss Belgium, and have several good sketching friends there). It’s the beer in the funny glass. I still have all the Belgian beer glasses I was given by my amis Belges back in the year 2000, though I actually got this one in England a couple of years later. The big bottle of Kwak was given to me at Christmas, but took me a while to open – that’s a lot of Kwak for one sitting. Kwak will always be associated with a funny story about my friend Tel who visited me in Charleroi one weekend, which I recounted in this blog post from 2008, “The night Tel drank the Kwak“.  That was funny. We were at my local, La Cuve a Biere, where we ordered a couple of Kwaks, but he drank his too quickly, and then the room started spinning, and everything went foggy (for him, not me, I was alright) and then he spent the best part of an hour in the small toilet of the pub, and it was not pretty. The “Kwak Incident” we called it. I miss Tel, he lives in Japan now. I miss a lot of things, places, people. Memories. That’s life I suppose. I miss recent things such as watching the Thor Ragnarok trailer a few minutes ago, that was so much fun, I miss it already. Difference is I can watch it again in a minute. And lets face it, I’m gonna. That’s gonna be a film I will need to watch with a much bigger glass of beer, Thor style. “Ragnakwak!” One glass I was given in Belgium was one such massive glass, with the words “Tres Grand Soif” on it, and a bell on it for when you need a refill. Santé!

One thought on “le kwak sportif”