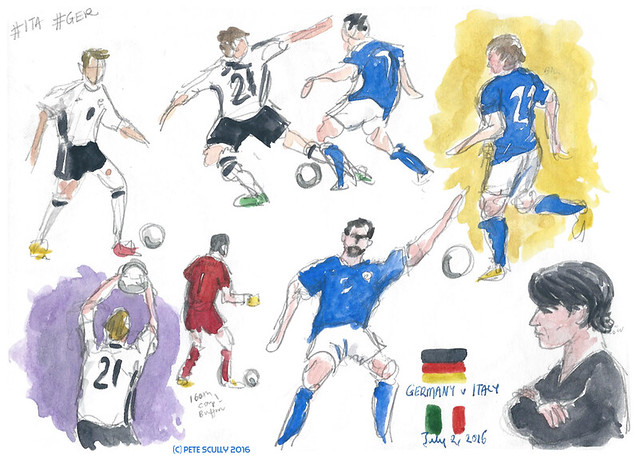 What will you do, now that it has gone, now that it is over? Euro 2016 is finished, Portugal walked away as champions, and that is that, no more football for a little while. Well, the football wasn’t always of the highest quality – it is international football, it rarely is – but there were a few good games, and a few historic results. Here are the last few sketches I did during some of the games, starting above with Germany beating Italy. Sorry, technically Germany did not beat Italy (they never actually have, in a competitive tournament), they drew, and it went to penalties, hilariously bad penalties, penalties you would not believe. Simone Zaza. I did enjoy the creativity of Twitter after his very odd pre-penalty river-dance routine. 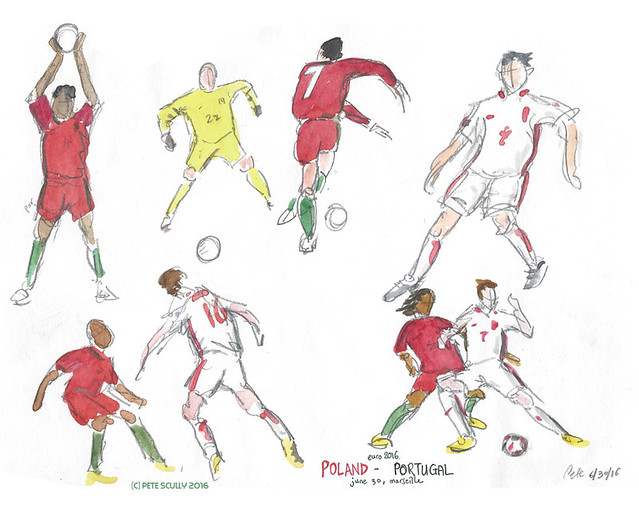 Speaking of penalties, Portugal played out another draw, this time with Poland, beating them on swift and well-taken penalties. What else happened? Lewandowski scored in the 2nd minute making everyone think “this will be a great game!” but it wasn’t, and I can’t remember much else. Ronaldo probably took his shirt off. 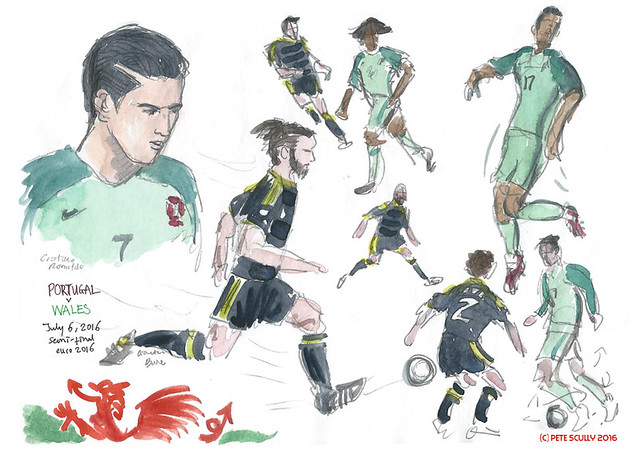 Wales were the last British team to exit Europe (if only there were some useful contraction to describe that phenomenon). Seriously, Wales got to the semi-finals of the Euros. I was starting to imagine that they might in fact go on and Do A Leicester. It was that sort of year. In the end, they Did A Tottenham, sis us all proud but ultimately fell down just before the end. They wore that black and grey kit (I must say, I don’t like it much) to play Portugal (who also for some reason wore the away kit, that odd teal number (I don’t like that either). It was a decent match though, but Portugal had enough to get past the Welsh, who frankly suffered from losing two of their best players (Ben Davies and Aaron Ramsay) due to simple yellow cards (UEFA, your stupid rules ruin these tournaments). If they had played, I’m pretty confident it would have gone to 120 minutes or penalties, like all of Portugal’s games. 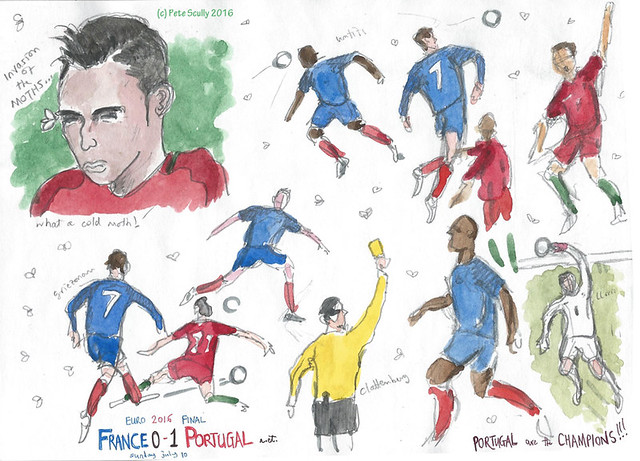 And so the Final at the Stade de France. Portugal looked like they were going to stand aside and let France do what was necessary in order to win the final at home, until they realized that France just couldn’t do much. Portugal defended rather a lot. It was a terrible game, but in the end Portugal won it with a wonder-strike by a player who Swansea didn’t think was good enough, Eder, a kind of modern-day John Jensen but in reverse. No, the Final was notable for two things – moths, and Cristiano Ronaldo. So the whole stadium had been invaded by billions of moths after some clever sod left the floodlights on all night. It was an invasion of moths. Anyway, a little while into the game, the Portuguese star Ronaldo was tackled and fell badly, his leg hurt. He tried to play on, like Gazza in 1991, but eventually collapsed. He sat on the pitch in tears waiting for the medics to come and get him. The camera did a close-up of him, and at that moment a moth came and landed on his face, as if to lick up his tears of sadness. What a cold, heartless moth. He was too sad to even swat it away. I know he gets a lot of stick, but I felt sorry for him, and he didn’t need some giant moth creature coming up and taking the mick out of him and feeding on his tears. I wondered whether the moth actually said something to him, like “Lionel Messi sends his regards”, Red Wedding style. All I knew is that when Ronaldo went off I knew, from the flashbacks to Gazza in the 1991 FA Cup Final, that this game would end up going to Portugal. And that’s how it went. It took a long time and a lot of very uninteresting football, but they came together and did their captain proud. He was Happy Ronaldo again by the end. Maybe that moth actually said to Cristiano, “don’t worry my man, we got this” and rather than just flying about randomly, they actually influenced the game, distracting French forwards, swerving the ball away from the goal, doing whatever meddling moths do. Remember that little moth Gandalf spoke to when he was imprisoned by Saruman on top of Orthanc? Same concept, but with football. Happy Ronaldo. Sad Messi, but that’s another story. So, Euro 2016 is over. The Premier League starts in August. Cannot wait…