Recently I went to Santa Barbara for the UCAAC (University of California Academic Advising Conference). I took the train down from Davis, an 11 hour journey on an Amtrak which didn’t have wifi, but did have amazing views. For an eleven hour trip it went by quite quickly. Zipping past the ocean, I even saw some whales, poking their heads and their tails out, an exciting sight. I spent at least half of the trip in the observation train, which was bright and roomy, and so I sat at a table and sketched. What else would I do? Sketching on trains is a good way for you to practice perspective. Also to practice steadying your hand while everything is bumpy. I caught the train at 7am, the first time I had taken one of these Coastal Starlight trains in California. They go right down from Seattle to San Diego, passing by many cities on the way. There were people who were making the long trip, a few interesting characters, and the announcers on the train liked to give the occasional piece of commentary. We crossed the Delta, went down the East Bay, through the Salad Bowl, horseshoed around a massive prison outside San Luis Obispo, paraded down the rocky coast before finally reaching the palm trees and beaches of Santa Barbara. It was a big ol’ train, a goliath on the move. I’d take the trip again. I did another on the less-lengthy train journey between Santa Barbara and Burbank Airport a few days later, sat in a regular seat. I’ll post my Santa Barbara sketches next, as I’ve finally started scanning them. Santa Barbara has a lot of red tiled roofs. 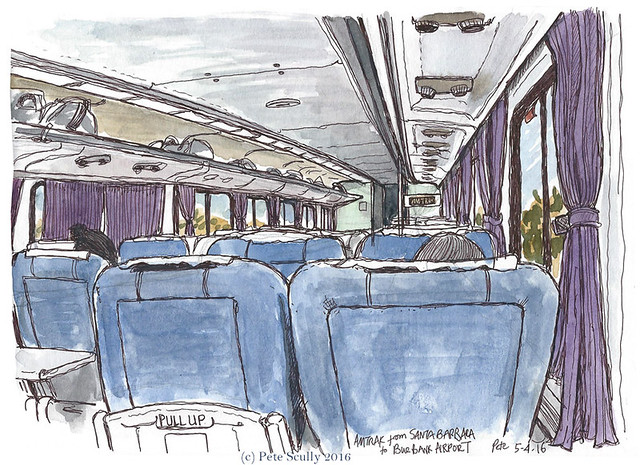 3 thoughts on “rails, whales and tales”