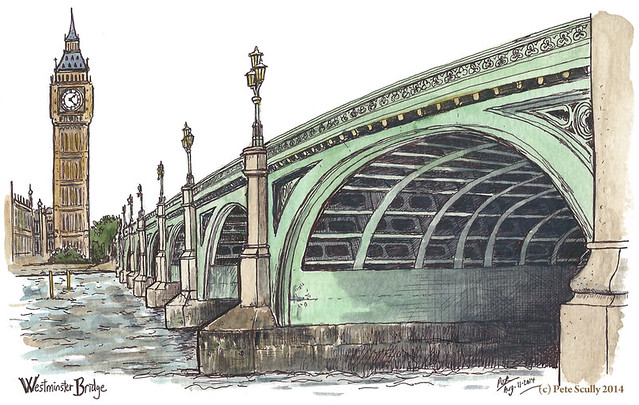 Westminster Bridge, crossing the River Thames. As I started sketching this, the rain came down, so I moved into the little tunnel next to the bridge (which I had never seen before; is it new?) and sketched from there. Eventually the rain stopped. Then started again, then stopped. It was one of those days. There is a very famous clock tower on the other side of the river. I like bridges. I even bought a book about bridges while I was back. In fact I spent a lot of time in bookshops in London. Bookshops are the best. Anyway, I had planned to sketch a lot more bridges in London but you know it is. Maybe that is the next sketchcrawl I organize? Those curves were not easy to capture with absolute mathematical perfection while stood against the wall in a damp tunnel with wet people shuffling by. But here it is, Westminster Bridge, painted green because the seat in the House of Commons are green (Lambeth Bridge further down is red because the House of Lords has red seats). It was opened in 1862 and Wordsworth wrote a sonnet about it.

2 thoughts on “at the westminster bridge”