This is Denmark Street, just off of Charing Cross Road in Central London. I sketched it over a period of two and a half hours one Wednesday afternoon, having taken the morning off from sketching (I was up in the loft searching for my old collection of Fighting Fantasy books), and added the rest of the colour later on. Denmark Street is famous within British musical history as our very own ‘Tin Pan Alley’, home of music publishers and recording studios, and later of music stores. There are lots of guitar shops, as well as other instruments of course, and is also home to the famous 12 Bar Club. The Rolling Stones, David Bowie, the Sex Pistols, all are associated with this street in some way (the Pistols actually lived here for a bit). Not only music – the comic shop Forbidden Planet was founded at number 23, where that red awning is in the picture now. It’s around the corner on Shaftesbury Avenue now. This place is steeped with history and it’s a street I have always had a lot of love for, being a bit guitar-obsessed when I was younger (it took me years to actually pluck up the courage to enter one of those stores though, very intimidating to a shy teenager!). I actually bought my current acoustic guitar from Macari’s, though it was from their other branch, on Charing Cross Road, back in 1996.

So when I heard that Denmark Street was under threat of demolition, all part of the Crossrail redevelopment that has completely destroyed the junction of Oxford Street and Charing Cross Road, I knew I had to sketch it while it still looked like this. Many of these buildings are ‘listed’, historic buildings of importance. Whether they will be knocked down or just somehow modernised is not clear, what it will mean for the historic character of Tin Pan Alley is also unclear, will the music stores be forced out in favour of latte shops and corporate office space is also not clear, but let’s face it. If Denmark Street loses its character it will be yet another blow to London. 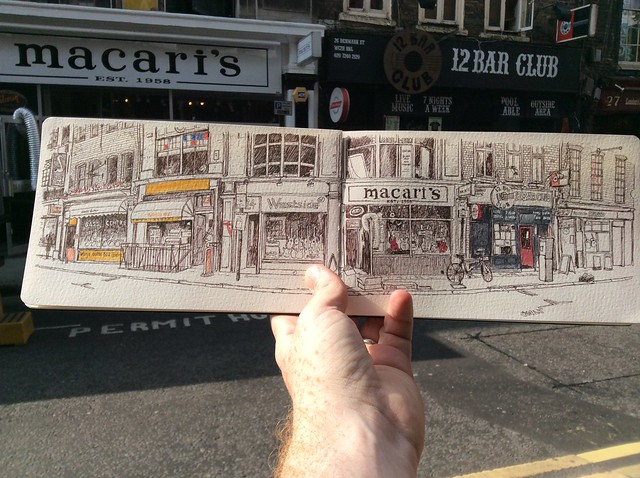 Here’s my sketchbook. I used the watercolour (“art-plus”) Moleskine, with a uni-ball signo um-151 brown-black pen. Oh, and here is a map showing where Denmark Street is. 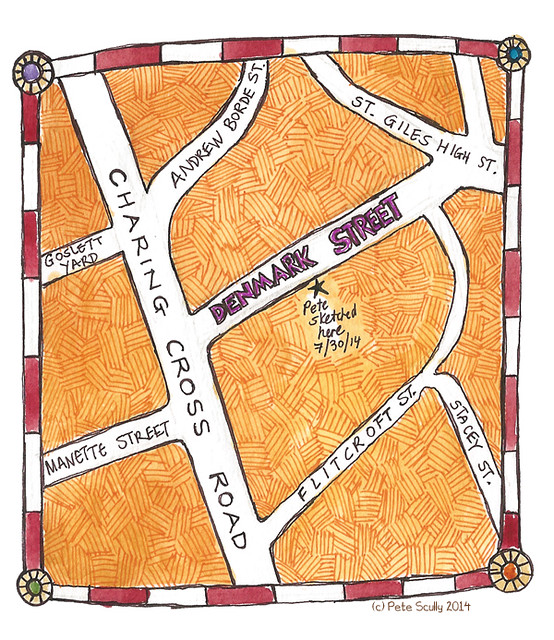 And finally, I thought you might like this. As you may know, I like drawing fire hydrants, mainly because I find them exotic and foreign, for we don’t have them in the UK. Well, actually we do, but they are underground, with metal coverings on the pavement. Here is one I sketched on Denmark Street. So there you have it! 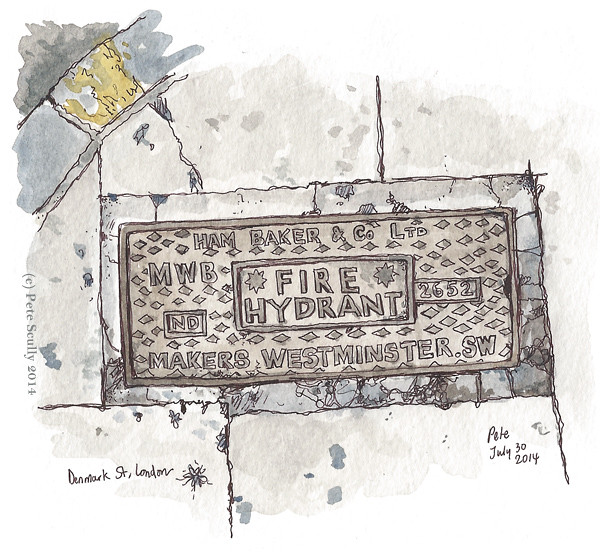