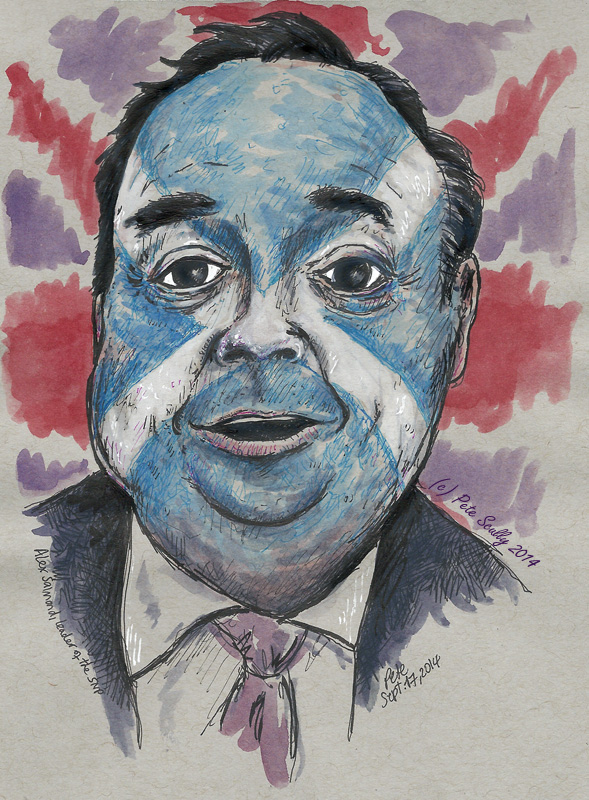 Today, September the 18th, 2014, is the day of destiny. No I’m not referring to the opening games of the group stage of the Europa League, I’m talking about the matter of a vote happening among our friends north of the border. No, sorry, not the Canadian border, I’m talking of course about Scotland. Living over here in America as I do now, you could be forgiven for not hearing much about what is actually a pretty massive issue, that of Scotland finally breaking from the UK and gaining full independence from the Union. The people of Scotland are answering a simple question, “Should Scotland be an independent country?”, with a simple answer “Yes” or “No” (though why “Aye” isn’t also an option I don’t know). Despite whichever side of the argument you sit on, this is a pretty proud day for Scotland, and especially for their First Minister, the Scottish National Party leader Alex Salmond (that’s him drawn above). As a Londoner who now lives in America, but who has always had a long affinity for Scotland, I really don’t know what my opinion is. For a long time I might have harboured quite an excitement at the prospect of Scottish independence, but now it is an actual prospect, I find I’m quite on the fence.

Honestly, I don’t know what to think about it. I’ve thought about it for years yet I feel a bit under-informed and uneasy about it now. First and foremost I’m of the mind that, as a non-Scot, it’s None Of My Business, but in fact I’m not so sure it isn’t. I believe Scots should choose their own destiny, no question. However it will probably mean the break-up of the Union, and as a UK citizen that affects me directly, as well as millions of other non-Scottish Britons. Politically speaking, Scotland carries a lot of weight nationally – it’s not really a big Tory-voting area, so the UK Labour Party would stand to lose a lot of its voting power if Scotland no longer sent MPs to Westminster. Hence the big Labour presence in the “Better Together” campaign; if Berkshire was voting for independence you can bet your life that Ed Milliband would be on the “Yes! Freedom for Maidenhead!” trail. But Scottish independence would also technically mean English independence. England, you see, isn’t independent. Nor does it have a devolved parliament like the Scots; it only has the direct British government, because that evolved from the English parliament following the Act of Union in 1707. Ah but no, you say, England along with Wales and Northern Ireland would remain “the United Kingdom of Great Britain”, right? Yes, in the eyes of the world and the EU and all the international treaties…but they wouldn’t be. Not really. The band will have broken up.

It’s hard not to think of the U.K. like a band. You have the big bossy lead singer (England) who often gets mistaken for the whole band by an ignorant foreign music press, you have the quiet mysterious bass player who has an amazing singing voice (Wales), you have the eccentric and beautiful drummer (Northern Ireland is the Keith Moon of the U.K.), and then you have the creative songwriter, the one with all the best ideas, maybe plays rhythm guitar but plays lead better than any of them, and is probably the best drummer too. We won’t mention the drugs. Maybe they had a decent solo career before falling on hard times and being convinced to form a band with their neighbour and set about conquering the world (but you know, literally). Now Scotland wants a solo career. The remaining members of the band keep the record deal and can carry on playing the back catalogue…but they’ll never replace the member they lost, and then the bassist and the drummer will want their own record deals, and before long, England is reduced to playing on Cruise Liners and appearing on Celebrity Big Brother Get Me Out Of Here. Ok maybe the band analogy is going a bit far, but it does feel like that, a little. Hey, in about twenty-five years when they’re all broke they can get back together for a comeback tour.

As Scotland votes though, there are a few things I am thinking about:

Who knows?! Good luck today Scotland, however you end up voting. It’s your country. Just be careful what you wish for, whichever way you wish.

8 thoughts on “take the high woad”