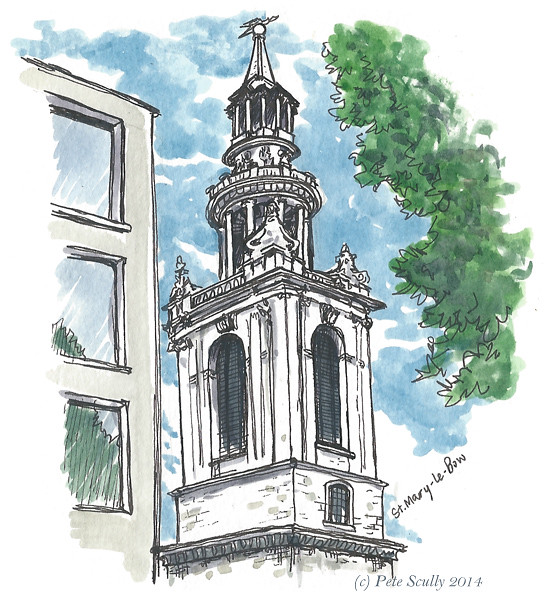 The Wren sketchcrawl continued… we had a lot of sketchers from all over on this sketchcrawl, and after finishing St. Stephen Walbrook I bumped into international-travelling urban sketcher Sue Pownall, and we walked over to St. Mary-le-Bow on Cheapside. The approach to this old church up the narrow Bow Lane is lovely, although the buildings are now modern you can just use a bit of imagination to fly back through the centuries and picture the narrow timber-framed houses leaning into each other over dirty streets, the sound of the Bow Bells echoing through the dark, bustling lanes. Yes, this is the church of the Bow Bells; the tradition is that a Cockney, a true Cockney, was born within the sound of the Bow Bells (and not Bow in East London as many wrongly believe), that is, within London. Cockney is synonymous with all Londoners now, London being much bigger than in Dick Whittington’s day, though of course he famously heard them from up on Highgate Hill, calling him back to his destiny as London’s Lord Mayor. You know the story. There’s a statue of his cat on Highgate Hill, near Whittington Hospital, but that’s far from here. The Bow Bells were important to London not because of fanciful stories and cockney categorization, but because in the middle ages these were the bells that rung to sound the curfew, and the closing of the city gates. If they rang and you were outside the city, you spent a night sleeping in the filthy gutters of Southwark or Finsbury. These days you can just get a Night Bus, and it’s a similar experience.

Those bells and the old church of St.Mary-le-Bow were burnt to the ground in the Great Fire of 1666, so Sir Christopher of course got to work building a new church, this one above. Well, kind of – it was destroyed again by the Nazis in the Blitz, but rebuilt after the War. I just drew the spire, time being of the essence, but it was a nice little courtyard to be sat in. 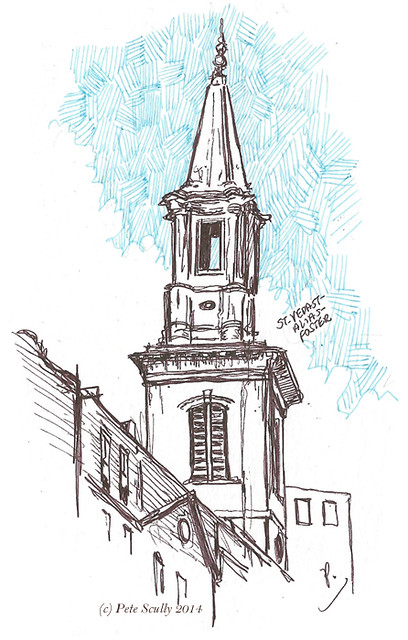 Before going to sketch St.Paul’s (I had this huge panorama in mind…didn’t quite make it) I wandered about to find a less well-known Wren church. I headed to St.Vedast-alias-Foster, up in Foster Lane, mostly because I liked its unusual name. when I got there, the staff were bustling about, preparing for a wedding. Though it looks like Just Another Wren Church (™) from the outside, the inside is quite spectacular, with a beautiful ceiling and a polished hall filled with light. The friendly suited man at the door welcomed me in to look around, and I asked him a bout the history of the church and its unusual name. Apparently in the middle ages this part of London was popular with Flemish immigrants from Arras in northern France, whose patron saint was St. Vedast (from the Latin name Vedastus; in Norman French and Flemish he was St. Vaast). This was corrupted into English as ‘Foster’, hence Foster Lane, and so the church is called ‘alias-Foster’ as a result. He showed me around the lovely courtyard, and said that a sketcher would love to sketch in there, and showed me the history of the parish churches associated with this one, many now combined (the ‘United Parishes’), including one church called St. Mary Aldermanbury which was badly damaged in World War II, and then closed down, with its remains being shipping across the Atlantic for rebuilding in Fulton, Missouri, significantly the place where Winston Churchill made his famous ‘Iron Curtain’ speech in 1946. All historied-up, I went out into the street and found a spot to sketch the tower. I kept it brief, because my next building was so much bigger than all of the others (probably put together). 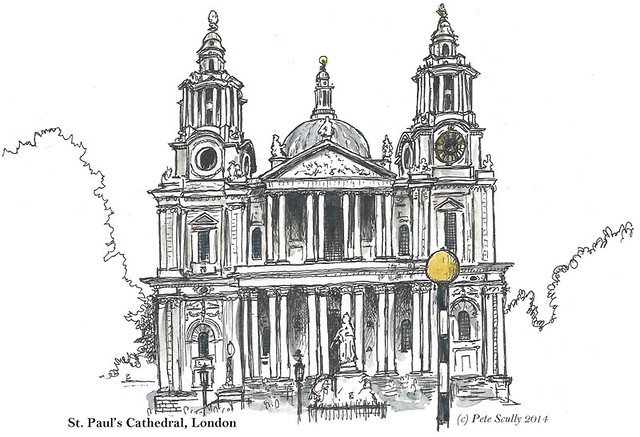 The plan was for a panorama, but I couldn’t decide on a good view, at least not from up close. Besides, the day was pressing on and I wanted to be done before our final meet-up at 4pm. So I stood across the front entrance from St. Paul’s Cathedral, as traffic and tourists rumbled by, and sketched in traditional London grey. It was actually a very sunny day, one of the more pleasant London afternoons. I remember those sorts of afternoons from when I was a teenager, wandering central London’s streets on a late Saturday afternoon, falling in love with the city. In those days St. Paul’s was much greyer, dirtied with decades of pollution and urban grime, but in recent years the grand old cathedral has been cleaned up significantly, and now sparkles white as if new-born. This is Wren’s masterpiece, but its significance to London is much older. For many, St. Paul’s is London. There has been a cathedral dedicated to St. Paul’s on this site, the top of Ludgate Hill (King Lud being an old figure of pre-Roman British legend who may or may not be related to the name of London itself), since St. Augustine brought Christianity to the Angles and Saxons. Not much is known about the early cathedrals, until the fourth incarnation, a huge Gothic cathedral, was built in the twelfth century. That was one of the largest buildings in Europe, but alas, along came the Great Fire of 1666 and in a matter of days it was gone. Along came Wren. As I’ve mentioned before, he had plans to rebuild London including St. Paul’s on his drawing board  for several years before the convenient fire, and for London’s landmark cathedral he wanted not another towering spire but a large Romanesque dome, technologically advanced and rivaling the greatest buildings in Christendom. The wooden model of his first design is still on display, but it looks rather different from the final buiding. This was late seventeenth-century England, not a time to make your premier church look, well, too Catholic. It was shaped like a Greek cross, and the nave was not long enough; it just didn’t look English. Wren went back to the drawing board, and in the end built the Cathedral we have today. It’s hard to think of more ‘London’ building than this. During the darkest days of World War II, when bombs flattened everything around it, the dome of St. Paul’s stood untouched, a symbol of hope for a city devastated. The ‘people’s church’ this was, and probably because of that, it was here that Prince Charles married Lady Diana in 1981 rather than at the traditional Westminster Abbey. 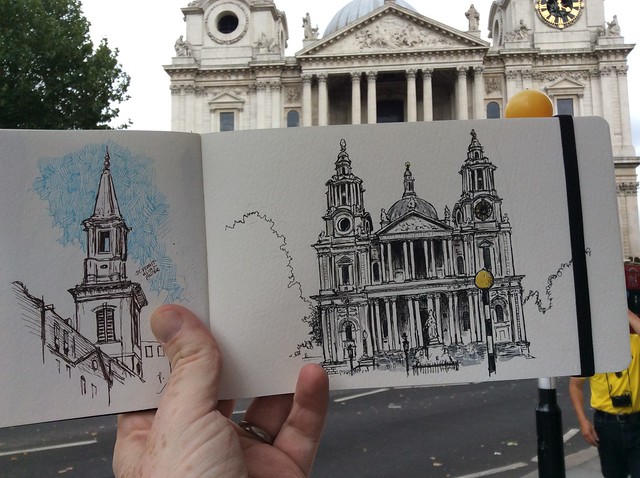 So it was here that we finished out sketchcrawl, and our journey through Wren’s City. Those of us who were left gathered by the steps of St. Paul’s to look at each others’ sketchbooks. I met some great sketchers for the first time, and reconnected with sketchers I have met with before. I can’t tell for certain (because I didn’t take photos of everyone’s books) but I’m pretty certain that as a group we covered most of the Wren churches from my map on this day. Here are some photos from the end meeting; you can see some more on my Flickr set Sketching Wren’s City. 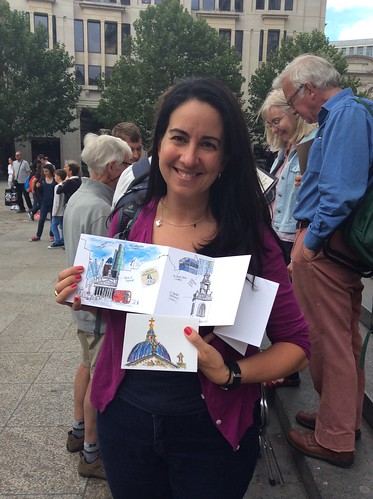 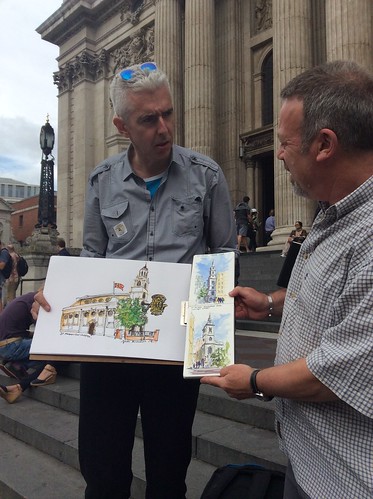 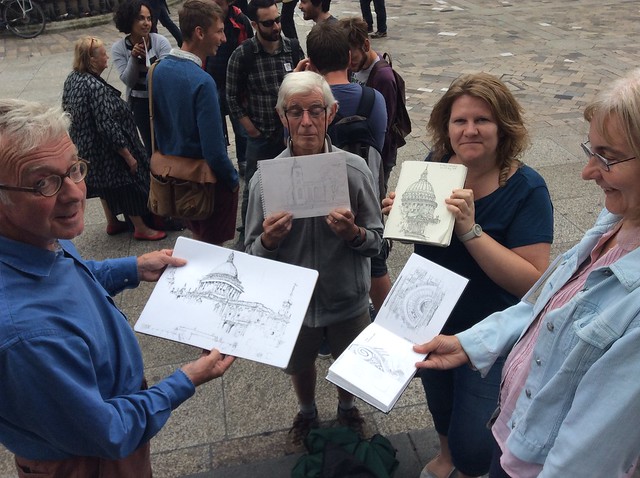 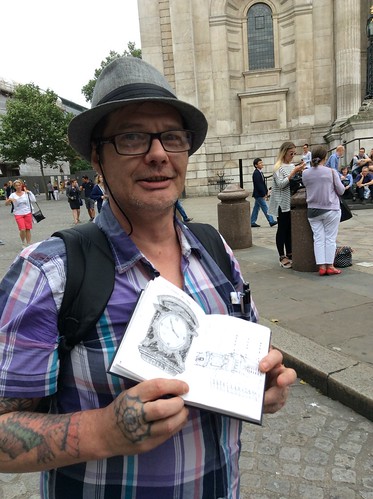 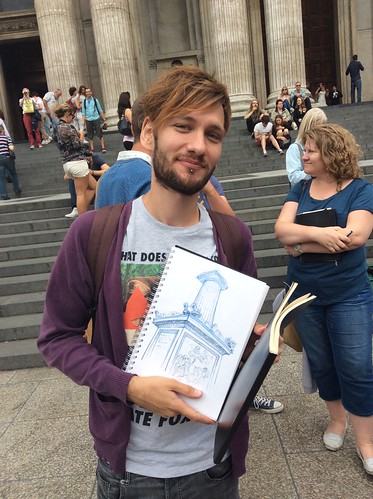 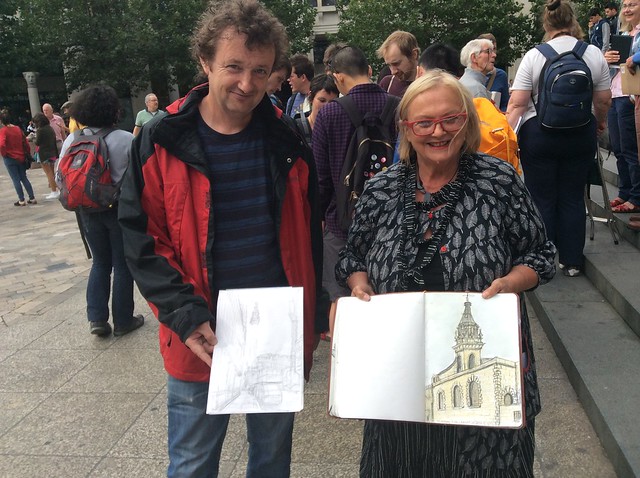 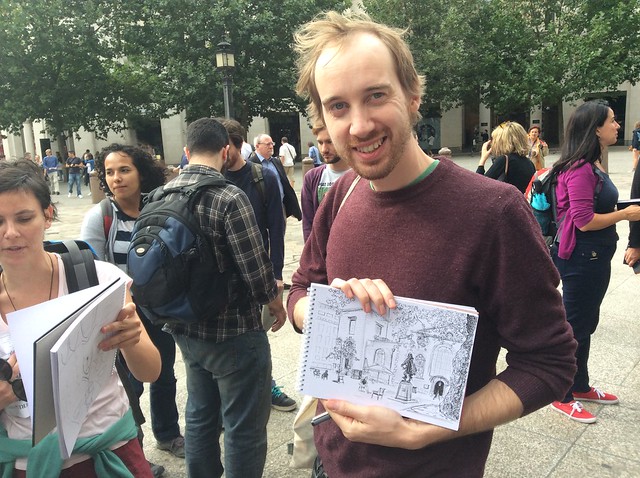 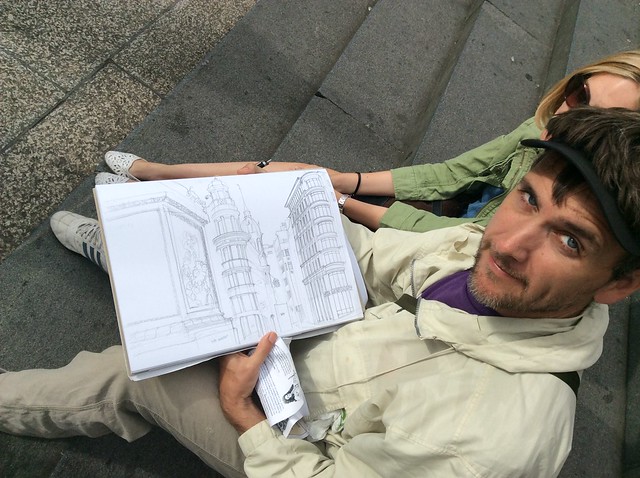 And here is the final group shot…spot the sketchers you know! 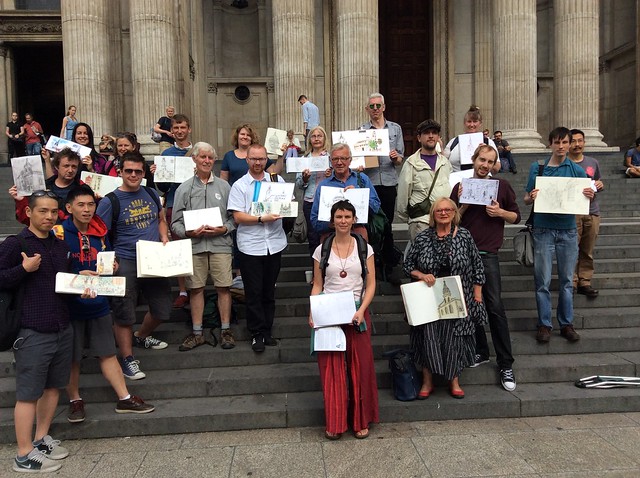 Everyone that came and made it to the end got a little sticker that said “I Sketched Wren’s City”. I like making stickers. If you’re interested in following our steps and sketching Sir Christopher’s City, click here to download the little guide and map I handed out on the day: Wren’s London booklet (pdf)

After this, we reconvened at a pub on Fleet Street called The Old Bell, which, by the way, was built by Christopher Wren. Who else! To those of you who came along, it was brilliant to meet you and see all of your lovely work. See you next year! (For…”Dickens’s London”? “Coren’s Cricklewood”? “Pete’s Burnt Oak?”)