Day Two of the UC Academic Advising Conference opened with a series of brief ‘TED Talks’. What are TED Talks? I showed up a but late to find out, and was somewhat crestfallen to discover that it wasn’t a series of storytimes with teddy bears (yeah I know, what was I thinking, but I watched Playschool as a kid, Big and ittle Ted, Humpty, Jemima, Hamble etc and, well I don’t know, but anyway it wasn’t anything like that. Forget I mentioned it.) Ok, so apparently they are academic presentations which are short and delivered at breakneck speed on various subjects to popular audiences, at least that’s the impression I got. 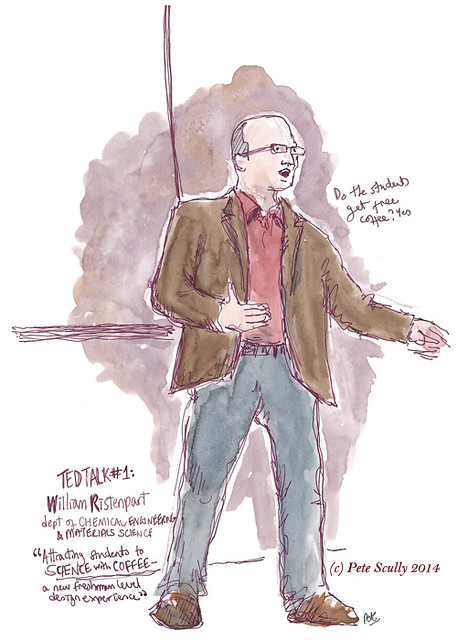 The first one, which I walked into a few minutes late, was by Prof. William Ristenport from Chemical Engineering, and was all about coffee. Science stuff about coffee. UC Davis made headlines recently because it was doing some sort of sciencey thing about coffee which apparently made people very excited because, you know, they drink it. I don’t like coffee personally so I see this sort of excitement in the same way as when people get excited over pictures of dogs wearing clothes, but I daresay the coffee scientists and enthusiasts enjoyed this one. The time limitation factored and everything was presented at high-caffeine speed so I wasn’t able to take many notes but it was interesting and Prof. Ristenport did a good job of entertaining everyone. And yes the students who take part in these coffee science sessions do get free coffee which I’m sure makes all the difference. 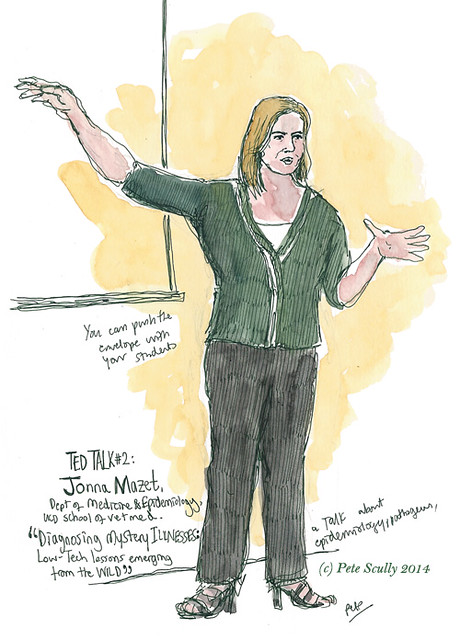 Again, I didn’t write many notes in the next TED Talk, given by Jonna Mozet, who is a Professor of Medicine and Epidemiology in the School of Vet Med. It was about diagnosing mystery illnesses and explored epidemiology in the wild among animals, and was interesting but a bit above my head. 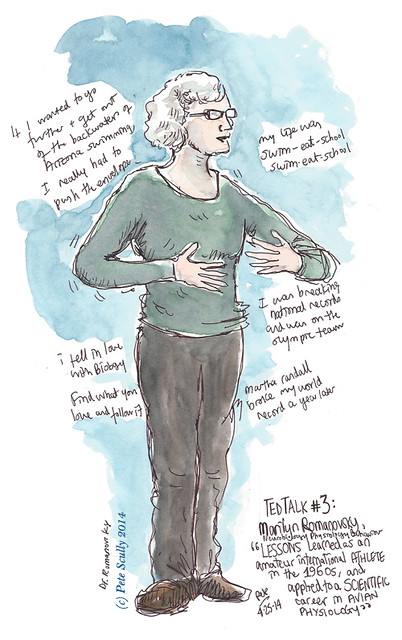 The third one was really interesting, given by Marilyn Ramenofsky, an adjunct professor in Neural Biology, and a former world-record holding swimmer. Her story spanned the decades and she told us about her years as a swimmer, medalling at the 1964 Olympics, and breaking the world record for the 400m freestyle. She fell in love with Biology and now researches bird migration at UC Davis. I think everyone loved her talk most, lots of people were talking about it afterwards. 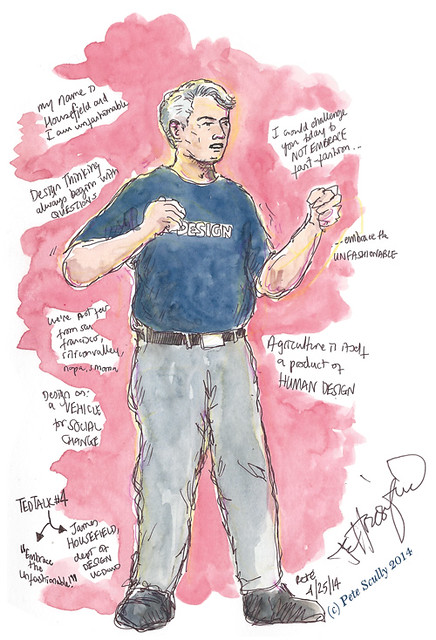 Finally, there was a talk given by James Housefield, Professor of Design at UC Davis. I have conversed with James via email (about sketchcrawls) before but hadn’t met him until now, and I really enjoyed his talk (although he did make everyone hug each other at the start which – see previous post – is not really my thing). This was a very lively talk and as you can see I was getting into the people sketching by that point and took a lot more notes. “Embrace the Unfashionable!” this was his mantra.

So that was the breakfast session of Day To. The rest of the conference’s events will be covered in the next post. Thanks for sticking with it!

(By the way, “TED” stands for “Technology, Entertainment, Design” and has nothing to do with furry inanimate bears)