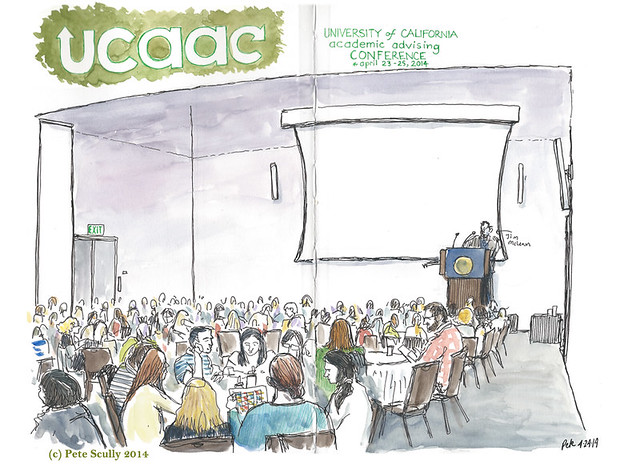 A few weeks ago, I attended the University of California Academic Advising Conference which was held at UC Davis. This conference was always held annually, hosted by a different UC campus each time, and I had previously attended the conferences in 2007 (Anaheim) and 2009 (San Diego). I hoped to go in 2010, however the UC had a big budget crisis and sadly, the advising conferences were cancelled for the foreseeable future. That was a shame, but nobody could afford to send staff on these trips like they used to. There was a mini-revival one year in Riverside, however this year 2014 marked the first year that the beloved “UCAAC” returned in full swing, and our very own campus was to be this year’s host. I however left it too late to register, and almost missed out. Fortunately though, I was at the last minute invited to attend as the “official sketcher”! Many great thanks to the organizers for extending this opportunity to me, I was incredibly honoured and took full advantage (and of course, learnt a lot about advising, this all being massively important for my day job too). I sketched quickly and productively, colouring on site as I went along too, using the smoother but thicker Zeta paper in a Stillman and Birn sketchbook.

Here are my sketches from the first part of the first day! 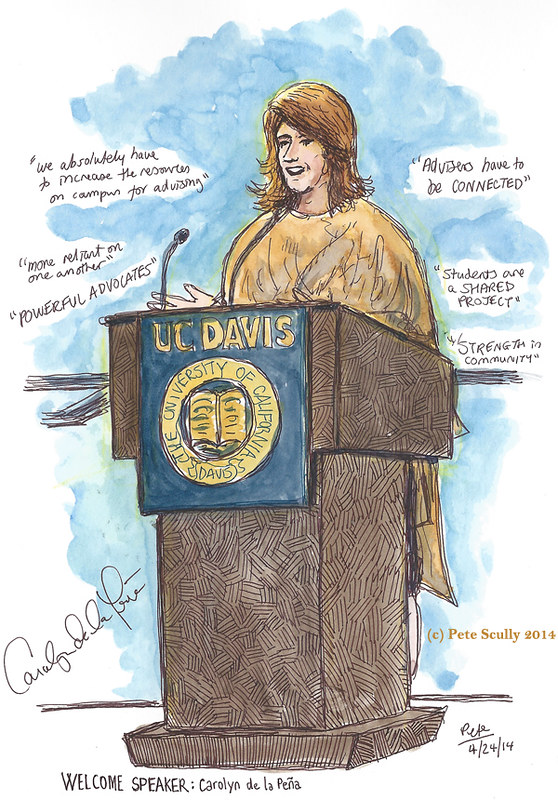 The Welcome Speaker was Carolyn de la Peña, American Studies professor and vice-provost and dean for undergraduate education, who opened the proceedings. I tried my best to write down some of the things she was saying while sketching her. 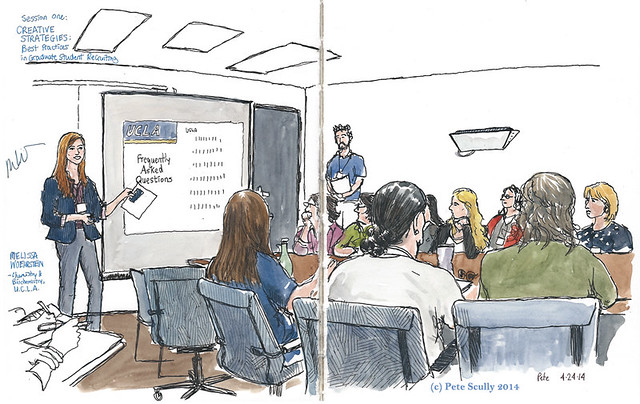 The first breakout workshop I attended was about graduate student recruitment (ever wonder what I do all day? That’s a really big part of it). It was called “Creative Strategies” and was presented by Melissa Woehrstein from UCLA. I enjoyed it, and asked questions, but it was just long enough for me to get this whole scene sketched. I did tell Melissa beforehand that I would be sketching, and many of the same people show up in each of my workshop sketches, many of whom I have attended meetings with for years. It’s always funny when they suddenly get to see you in your other guise as the sketcher, I kinda felt like as if Clark Kent wore his cape while sitting at his desk at the Daily Planet (actually he probably does, under his shirt, but that’s the best analogy I can come up with, not that I’m Superman or anything). Anyway hopefully it didn’t distract anyone, but everyone was very positive about my sketches which was nice. Plus I had a badge that said “Official Sketcher” (handwritten admittedly but still, Official).