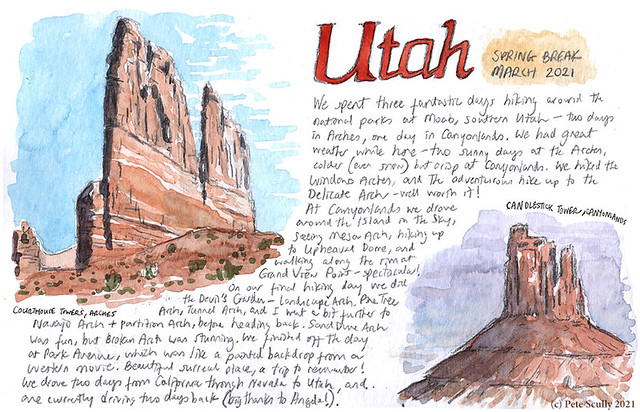 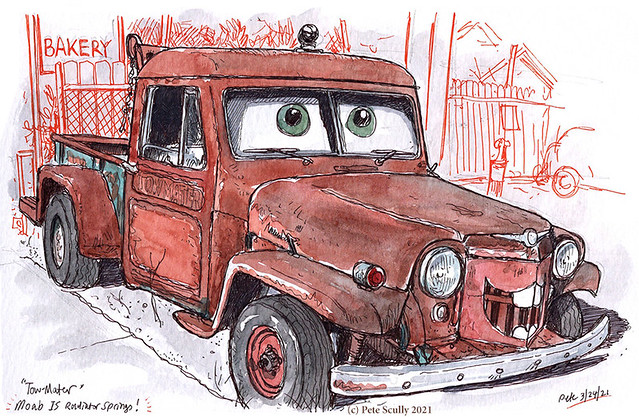 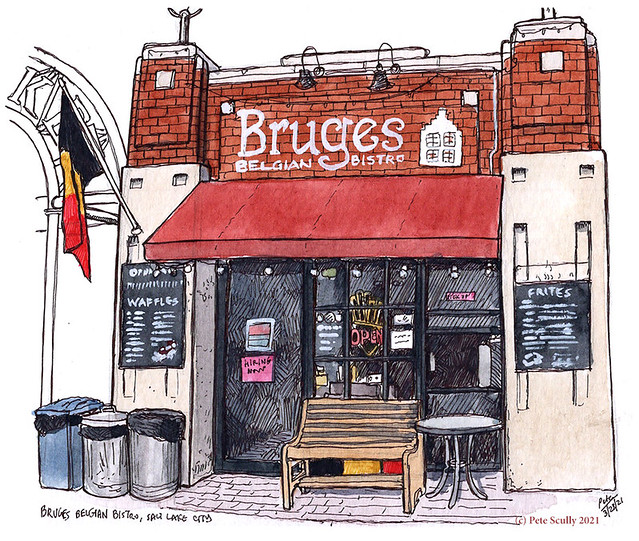 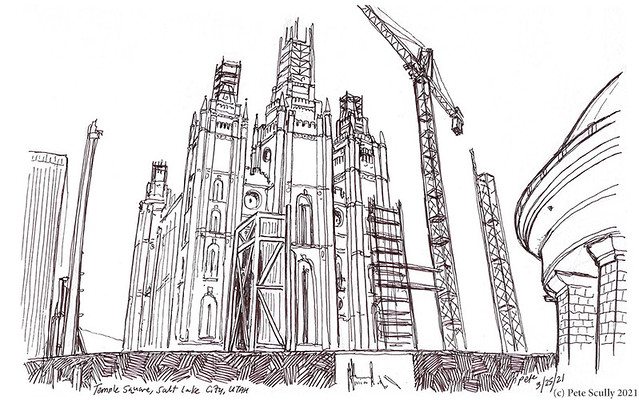 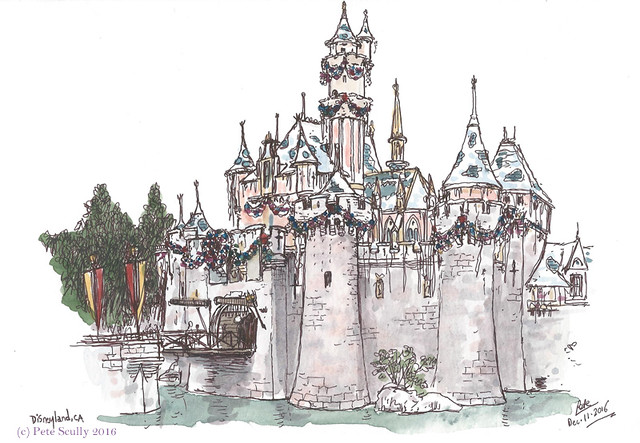 Before Christmas we took a family trip to Disneyland, down in southern California. I managed to get a couple of sketches in, namely the Fantasyland castle, and Flo’s V8 Cafe in Cars Land, over in the California Adventure park. Christmastime in Disneyland is fun. Hey what is your favourite Disney movie? I’m not including all the ones owned by Disney like Star Wars and Marvel movies, but the cartoons, and some of the live-action ones like Mary Poppins and stuff. I suppose Pixar counts as well. Mine is probably Jungle Book, or maybe Aladdin. 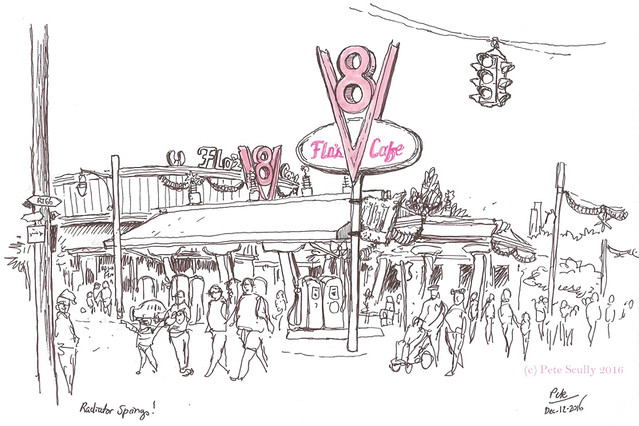 These were the first sketches in my new Stillman and Birn (Beta) softbound landscape sketchbook. That’s a mouthful, so we’ll just call it the Sm&B(B)SbLsSb for short.

Just a selection of the various variants of Lightning McQueen, my son’s favourite toy character. And of course upon finishing this, he points out which ones I did not draw, cars which to me look identical but to him have one slight variation that makes the most immense difference. Minute details are everything to that five year old. Never, ever forget: young kids are not stupid, they notice EVERYTHING, way more than adults do. It keeps me on my toes, let me tell you.  I was the same, as a five year old counting the vertebrae on the dinosaurs at the Natural History Museum, oh I was the same. This was drawn in the excellent Stillman and Birn ‘Alpha’ book I’ve reserved for pictures of the boy’s things. I like Lightning McQueen as well, “Cars” is fun.

Cars Land, aka Radiator Springs, the most popular attraction at the Disneyland California Adventure, and the main reason we travelled all the way to southern California. My son, who had his birthday recently, is mad about Pixar’s Cars movie, as are many kids his age. Cars Land is HEAVEN. One thing Disney does really well is attention to detail, nothing is done in a half-hearted way. It is expensive to go there, but you can see they spend the money really well. Above, I had about half an hour or so to do some sketching while my son, overwhelmed from a morning spent inside his favourite movie, rested for a bit. I stood at the excellent Cozy Cones motel while happy tow-truck Mater posed for photos with ecstatic kids. Every building there is an incredible and absolutely faithful recreation of the Radiator Springs in the film, from the rocky backdrop catching the warm light right down to the detailing of Sarge’s Surplus Hut or Luigi’s Casa Della Tires. Occasionally, the great car Lightning McQueen himself will ride through, and as the sun goes down, the neon lights of Flo’s V8 Cafe and other buildings come on to the music just as in the film. Every so often the DJ Car (one of the ‘”import punks” from Cars 1) rolls in and plays music while dancers dance with the kids. The Radiator Springs Racers ride is wildly fun, though my son preferred only the Junkyard Jamboree ride, in which the wild tractor cows dance around while riders sit in carts behind them. We went on that about ten times. Yep, for any parent of any Cars-mad kid, a trip to this place is worth every penny.

Below: our hotel room in Anaheim. Got to have the in-room sketch when travelling!

Sometimes you just need to draw a shoe, and what a shoe! This is one of my son’s beloved Lightning McQueen shoes. It’s not drawn in the book which chronicles all of his shoes (those are in black and white), rather it’s in the Stillman & Birn Alpha book (which I’m using to draw his things in colour), and this merited colour. The heel has little lights embedded inside which flash when he walks. This whole drawing took me a couple of hours, while watching Spaced. It is a busy, trying week, this week, and sometimes you just need to sit back and draw a shoe.

Here are some of my son’s favourite toys, the Cars. I am forever tripping up on them, camouflaged against the roadmap rug in the living room, or lined up in very specific race positions on the many racetracks we draw together. The two movies, along with the Mater’s Tall Tales specials, are never far from the dvd schedule, and we all find ourself humming one of the tunes from the movies or saying ‘ker-chow’ or ‘dad-gum’ or such as like. My son has loads of these die-cast metal toys from both movies, some of them quite hard to find individually, to the point where it becomes a parent’s favourite quest to find the more obscure ones (I don’t know who Rip Clutchgoneski is in the movie but he for one is very difficult to obtain). And unlike so many toys, these get really played with, and my already multi-lingual son likes to get the Spanish one to count in Spanish, the French one in French, Francesco Bernoulli says ‘uno! due!’ tre!’ and so on. The German one is called ‘Vettel’ (actually it’s Max Schnell, but Sebastian Vettel is his favourite race-car driver, and I think he does the character’s voice in the German version of the movie, just as Lewis Hamilton guests in the original). See? I’m an expert.

Cars is a funny universe though. I read it as a Planet of the Apes type world, and would love to see Cars 3 run along those lines, whereby a human from the past arrives, does the ‘get your wheels off me you damn dirty Audi’ or something, and ends up with Mater pulling the Statue of Liberty out of Carburettor Canyon. Surely no crazier than the story of Cars 2?

I drew this in copic multiliner pen with watercolour, in the Stillman & Birn ‘Alpha’ sketchbook. I am using that sketchbook to draw a series of my son’s things. It’s great paper too.

Back to this series, though I actually am not sure if there’s another shoe between the last one and this. These shoes however are the main ones, the favourite footwear: Lightning McQueen shoes. They have little red lights on the soles that flash when my son runs in them. Drawn monochromatically in black copic multiliner, as per the convention of the series, but this is one shoe where you really need the colour! These shoes are getting bigger and bigger.