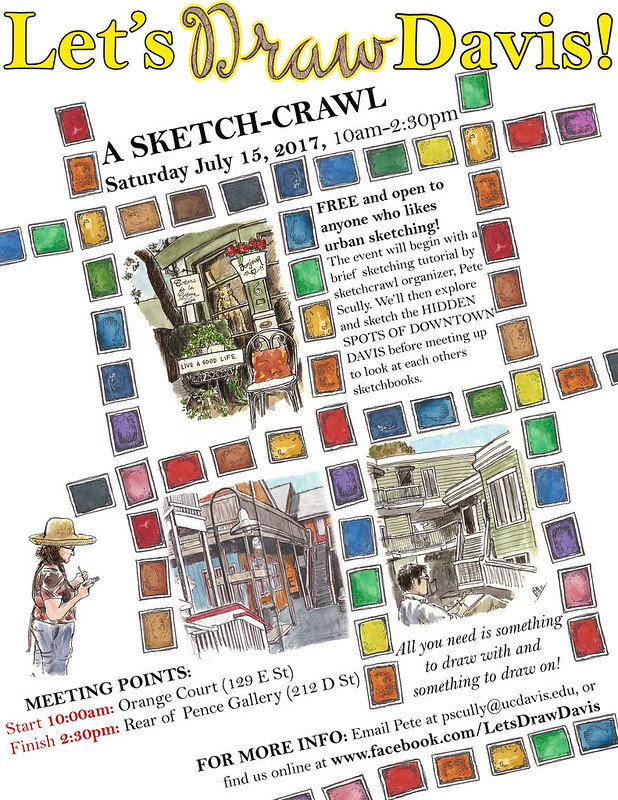 It’s July, so it’s time to sketch. Mind you, it is time to sketch in all the other months too. But “Let’s Draw Davis” is back – and definitely monthly again. It used to be monthly until I got very busy and wasn’t able to organize it so often, but now there are three of us organizing these sketchcrawls, taking turns each month – many thanks to Alison Kent and Ann Filmer. July is my turn, so if you’re in Davis, join us on Saturday July 15!

A new aspect of the sketchcrawls that we are trying is that there will be a short sketching tutorial at the start by the organizer (me in this case), before heading out to sketch. So at 10am I will give a brief urban sketching tutorial, a few basic tips and techniques to try. We will start at Orange Court, the little courtyard off of E Street (between 1st and 2nd), and the theme this time will be to explore the hidden spots of Davis – the alleys and courtyards of downtown. We will finish up at the space behind the Pence Gallery, off of D Street, to look at each other’s sketchbooks.

As always this sketchcrawl is FREE and open to the public. All you need is something to draw on and something to draw with. Oh and maybe a cold drink, because it’s always hot in Davis in July. There are plenty of places nearby to cool off!

For more information and to see the other upcoming dates of the Let’s Draw Davis sketchcrawl series, please visit the new Facebook page: www.facebook.com/LetsDrawDavis 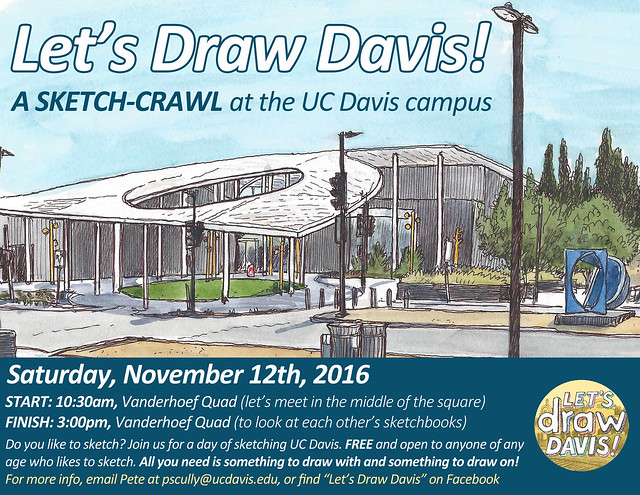 Join us for another sketchcrawl in Davis, California! This time we will sketch around the exciting area of Vanderhoef Quad, on the UC Davis campus. This is home to the UC Davis Welcome Center, the huge Mondavi Center for the Performing Arts, and of course the brand-new Manetti Shrem Museum of Art, which has its grand opening the very next day. Not far from here is the Robert Mondavi Institute for Food and Wine Sciences, an interesting place to sketch with its Good Life Garden (Jerry and Margo live next door), and of course the UC Davis Arboretum and Lake Spafford are just a couple of minutes’ walk away, a peaceful place to sketch.

As always this sketchcrawl is FREE and open to anyone of any age/level who just wants to get out and sketch, and meet other people who like to sketch. All you need is something to draw with! 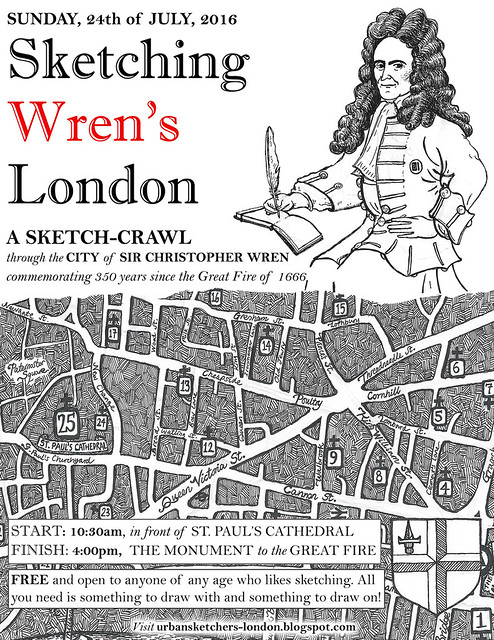 While we’re talking about sketchcrawls..!

“SKETCHING WREN’S CITY”… Join us for a sketchcrawl in London, through the City of Sir Christopher Wren, architect of St. Paul’s Cathedral and so many other churches and buildings in the years following the Great Fire of London, 1666. Hey, that was 350 years ago!

Starting at 10:30am outside St.Paul’s Cathedral, and finishing up at 4:00pm at Wren’s Monument to the Great Fire, we will explore the city in groups or individually as you prefer, looking for the London built by Wren after the Great Fire.

Tell your England sketching friends! This being the weekend before the International Urban Sketching Symposium in Manchester there will be a few sketching events around that time of year. The day before (July 23) there is a sketchcrawl with the London Urban Sketchers at Trafalgar Square – should be fun!

Hope to see you in London! 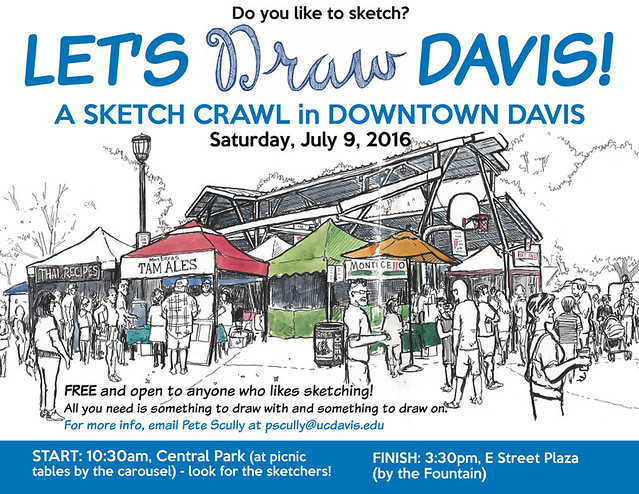 “Let’s Draw Davis” is back! Join us for a sketchcrawl around downtown Davis on Saturday, July 9th.We’ll go from the Central Park near the Farmer’s Market and sketch in a group or individually as you prefer, heading downtown towards the E Street Plaza to look at each others sketchbooks.

START: 10:30am, Central Park (at the picnic tables by the carousel)

This sketchcrawl is FREE, and open to anybody at all, beginners or seasoned artists, anyone who wants to just get out and do a bit of drawing and meet others who like to do the same. All you need is something to draw with and something to draw on! (And maybe a hat, and sunscreen). And afterwards, if you like we can cool off in De Vere’s Irish Pub.

If you have any questions, leave a comment below!

**I have been rather busy on weekends these past couple of years and had little time to organize these once monthly sketching meet-ups, but I felt that it’s time to start getting us sketchers together again! I plan to start organizing more in the Fall, likely on Sundays (those Saturdays belong to AYSO soccer these days…) so if you can’t make this one, stay tuned!

Time for another sketchcrawl in sunny Davis…join us next Sunday September 22 for some sketching on the UC Davis campus!

We will meet at noon at the Good Life Garden, located in the courtyard of the Robert Mondavi Institute for Food & Wine Science (http://rmi.ucdavis.edu/). From there we will sketch individually or in a group as you prefer, before reconvening at 4:00pm at the Wyatt Deck in the Arboretum to check out each others’ sketchbooks.

As always this sketchcrawl is free  and open to anyone who likes a bit of location drawing. It’s a great way to really explore our town, and meet (and learn from) other sketchers.

Join us for another Sketchcrawl in Davis! This time in the evening…Wednesday August 21, at Picnic-in-the-Park (the Wednesday Farmer’s Market, Central Park). We’ll meet at 5:00pm by the Farmer’s Market entrance, sketch around the park (there will be a band and lots of other fun sketching opportunities), and then finish up at De Vere’s on E St at 8:30pm. It’s Davis Beer Week and so a bit of Drink’n’Draw in the pub afterwards can be had too (I believe 21st Ammendment will be taking over the taps at De Vere’s that evening). If you’re in Davis, perhaps I will see you there!

London! Here is a sketching event just for you, a midweek, afternoon-evening sketchcrawl around the old neighbourhood of that notorious elusive villain, Jack the Ripper.

Join us as we sketch around Whitechapel, in search of its past. We will begin at 3:00pm meeting outside Whitechapel tube station, and then sketch individually or in groups. This event is FREE and open to anybody with an interest in sketching, all you need to bring is something to draw with and something to draw on (although I have made some very special micro-sketchbooks for all participants… see photo below).

As with last year’s sketchcrawl around Temple and Fleet Street, I will provide hand-drawn maps with some interesting information (and it will include the locations of the Ripper’s ‘canonical five’ murders). We will finish up outside Christ Church Spitalfields at 8:00pm. There we will check out each other’s sketchbooks, and then maybe pop across the road to the Ten Bells for a pint in the Ripper’s very own local.

Of course, the London of Jack the Ripper is gone. Thankfully, one might add. The slums were cleared, the squalor washed up. The twentieth century happened. The Blitz happened. History happened. Hipsters happened. Yet traces of Jack’s London still remain, some invisible, some ignored, and some pretty hard to miss. In this sketchcrawl, let’s look for the old East End, the smog-chipped bricks, the weather-worn cobbles, the winding streets, the smell of old pubs, the sudden towering steeples, the London that the nineteenth century left behind. Whitechapel, Aldgate, Brick Lane, Spitalfields, the edge of the City. The Elephant Man. The Krays. Jack Sheppard. Ashley Cole. Er, Jack London stayed here for a while. Even Big Ben and the Liberty Bell were born here. Jack the Ripper is gone, a legend for the tourists, but old London is still there, hiding in the modern world, AND WE ARE GOING TO SKETCH IT!!
(or of course, you can just sketch the hipsters…)

Join us for another sketchcrawl in Davis California! I’ve not had as much time lately to organize these as often as I would have liked, but the sun is out and the birds are singing, and so there’s no excuse not to do some urban sketching. This time we will meet at the Farmer’s Market (meet at the corner of 3rd and C) at 10:30am, and sketch the market and the are around before meeting up again at 3:00pm by the Carousel in Central Park to check out each others sketchbooks.

This event is free and open to anyone who likes sketching. It’s fun to meet other sketchers, and urban sketching is a great way to look at the town where we live.

Januarys are busy, and this week has been busy, busy, busy. Busy weekend too, what with a super-hero themed kids birthday party to prepare for, but yesterday I stopped and took part in the 38th Worldwide Sketchcrawl here in Davis California. We met outside the Pence Gallery on D St at midday, and immediately set about sketching the fabulous Antiques Plus antiques store. I drew using my dark brown uni-ball signo um-151 pen, and had intended to colour this, but you know how it is, there are sketchers to talk to, and I sketch more slowly when I chat! But it is great fun all the same. There were about eighteen of us in all, some new faces and some regular sketchers.

The courtyards and alleys between E and D Streets are very cute and with the trees so leafless, full of interesting shadows.

It was a mild sunny day, warm in the sun but nippy in the shade. At the end of the sketchcrawl, we met up at De Vere’s Irish pub to warm up and chill out, and checked out each others sketchbooks. I have wanted to sketch this bookshelf for a while so took the opportunity to get stuck in, wearing down the brown micron. It was very nice to meet some new sketchers, catch up with sketchers I haven’t seen in a while, and to see the regular faces too, all with great and stylistically varied sketchbooks. I definitely picked up a few tips.

Check out the rest of the world’s results from the 38th Worldwide Sketchcrawl on the SKETCHCRAWL FORUM!

I wasn’t able to schedule an August sketchcrawl (and boy, was it hot this month!), but Let’s Draw Davis in September instead! This time we will meet on the very calm and quiet UC Davis campus – calm and quiet, before the thousnads of students return shortly afterwards! UC Davis was recently ranked ‘the coolest school in America’, and how much cooler would it be if we all sketched it? A lot cooler!

We will meet at the Silo, in the middle of campus. The Silo itself probably won’t be open for food, being the weekend, so you may want to bring a packed lunch. It’s an interesting area to draw, and we can meet at the tables bewteen the main building and the Bike Barn. From there we will sketch around campus, on your own or in groups, before reconvening outside the main doors of Shields Library (or just inside if it’s too hot) to check out each other’s sketchbooks.

If you can’t find your way around campus, I recommend visiting the UC Davis website where they have an excellent online campus map: http://campusmap.ucdavis.edu/. Why not check out the UC Davis Virtual Tour as well?