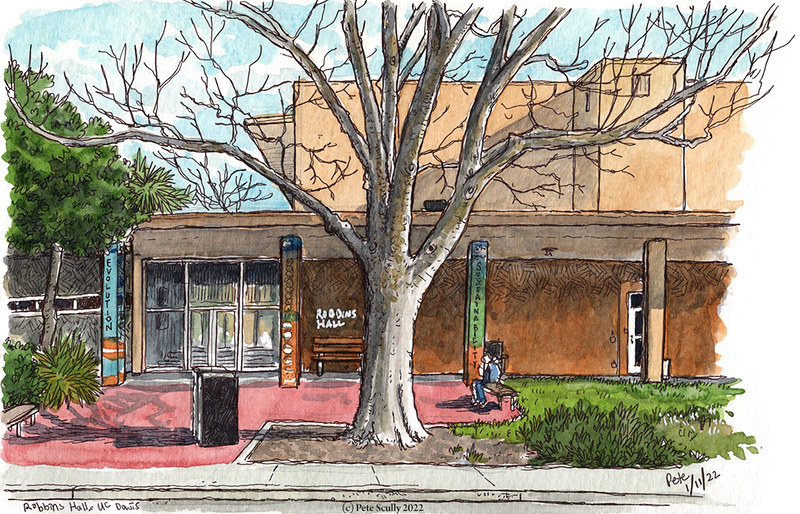 This is Robbins Hall, UC Davis, drawn a few weeks ago. I like the way the tree spreads out into all those branches. Like branches of evolution (linking the picture thematically to the fact the word ‘evolution’ appears on the building), if evolution meant all evolving into the same thing, which is not generally how evolution works. I’m not sure a tree is the best model for describing the process of evolution of species, just as it’s not that great at describing the evolution of languages),  Campus was still quieter with most people working remotely; that changes today, as our temporary from-home status comes back to our (temporary?) not-from-home status. I’m here anyway, but I think the fluidity between home/not-home are here to stay. We will see what the rest of this year brings. As January closes and February begins, the longest month replaced by the shortest month, things are busy. I had been considering a trip back to England to see the family during this period, but I decided against it when the new Covid strain hit the charts, the Omicron, that difficult third album. It’s so exhausting just thinking about everything, so I’m putting that trip off. I am sure I’d be on edge. As it turns out this week will probably be the busiest week of the year work-wise and the thought of trying to interview people remotely from my mum’s kitchen in London late at night didn’t appeal, so the trip back to London is delayed a bit longer. This is the longest time I’ve not visited London. I’ve been drawing Davis a lot this month, taking a break from the soccer, and re-obsessing over the Beatles since the release of Get Back, and Paul McCartney’s book ‘The Lyrics’, which I got for Christmas. I’ve re-watched Get Back so many times now, and spent hours poring over that book, I want to write a proper post with my thoughts about it all (and some Beatles-related drawings?), but that may take a while. I’ve even dug my old electric guitar out from its stasis pod under my bed to try and get back to playing a little, it’s time to branch out again musically. I might even buy a bass, if I can figure out where I would put the thing.