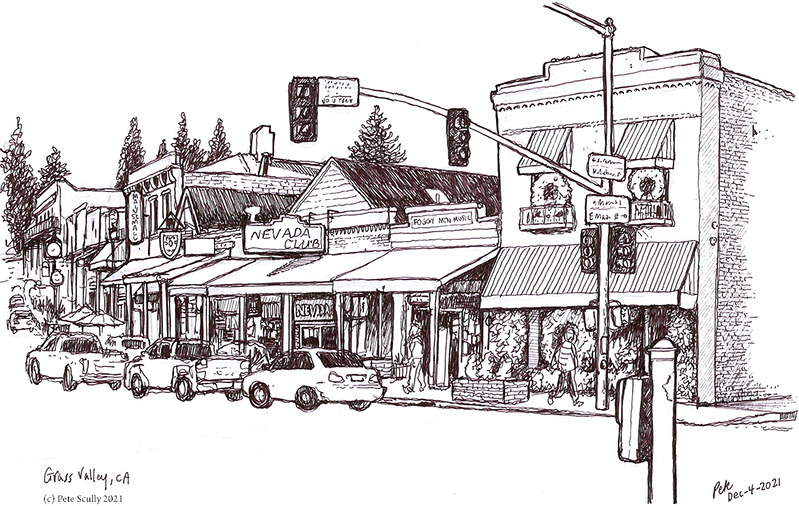 Early December, we drove up to Grass Valley for our final soccer game of the NorCal Premier Fall season, for a game in which we lost, though it was a pretty close game for much of it. The other coaches were nice, and after the game the team all had pizza together. Afterwards I got to look around the town of Grass Valley for a bit, we had never been up that way before and the downtown area was quite historic looking. We went to a great little chocolate shop, and there was a lovely little music shop selling guitars and ukuleles. I have been getting much more into playing the ukulele lately, and been practicing on it much more, and I really wouldn’t mind getting back into the guitar again, though I put that instrument down a long time ago now. I also got to do a sketch (the music shop is the second one along, that flowery store on the furthest right was pretty cool as well and had a large Christmas tree inside that went up a couple of storeys. The shops snaking up the hill reminded me a little of Sonora, the place we visited before going to Yosemite. This was old gold mining country, so lots of these little old gold country towns looks a bit like this, quite sketchable. It was bright and sunny; down in the central valley where we live everything had been blanketed in a dense fog, but here in the foothills they were above the fog belt. Anyway that was Grass Valley.