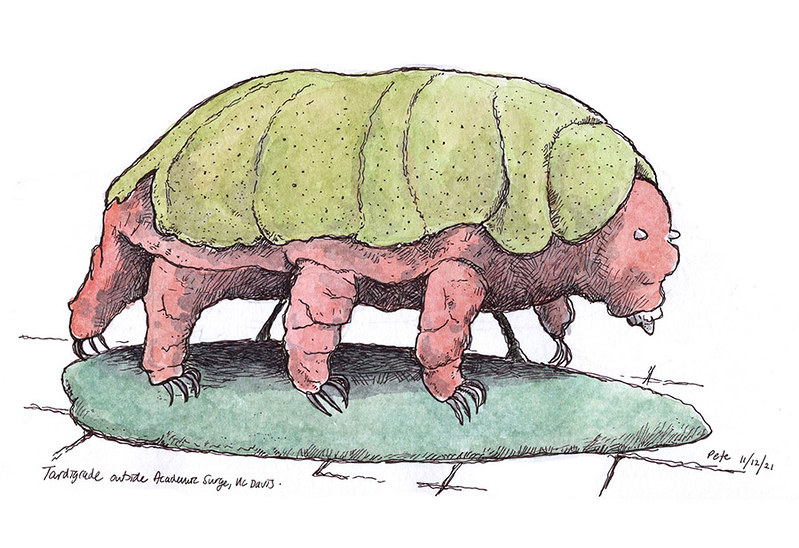 They do, don’t they. Everybody loves tardigrades. This is a sculpture of a tardigrade, also known as a ‘water bear’, outside the Academic Surge Building on campus, next to where I work, home to the Bohart Musuem of Entomology. I took me three attempts to spell ‘Entomology’ by the way, going through ‘Entemology’ and ‘Entimology’ before finding the right spelling. I knew it probably wasn’t ‘Entamology’, and ‘Entumology’ looks very wrong, and ‘Entermology’ is right out, but looking at it, it should really be a word for something and it’s a shame it isn’t. When I first came to campus I actually interviewed with the Viticulture and Enology department, and they actually offered me the position despite my response to “what is Enology” being “it’s insects, innit.” No, Enology isn’t insects (it’s actually wine science), but Entomology is. So, they have a big tardigrade sculpture outside, because yes, everybody loves tardigrades. Except students awaiting exam results, they don’t like tardy grades. Here’s one, “what is the difference between an Aquarius and a Tardigrade? One is a water bearer, and the other is a water bear.” Ok that joke needs a bit of work (actually I think that joke needs a different job), but it’s true, everybody loves tardigrades. They are tiny little super beings that can live in any temperature and in any environment, although even they probably avoid parts of south London after dark. They are miniscule, and have been found in every part of the Earth, from volcanoes to the deep oceans, from the Antarctic to the Amazon, from Tesco to Asda, they are everywhere and can survive any conditions, although even they probably couldn’t sit through half an hour of watching Mrs Brown’s Boys. Thanks to humans feeling the need to pop off into space, tardigrades are probably already colonizing the moon, and are watching down on us wondering why it’s taking us so long to come back and get them. They are sometimes called ‘Moss Piglets’ but that might just be their band name. They have survived all five mass extinctions, though I still don’t fancy their chances under the Tories. They don’t actually live for very long, about 3 or 4 months, but that’s still longer than most Tottenham managers’ careers. Everybody loves tardigrades.