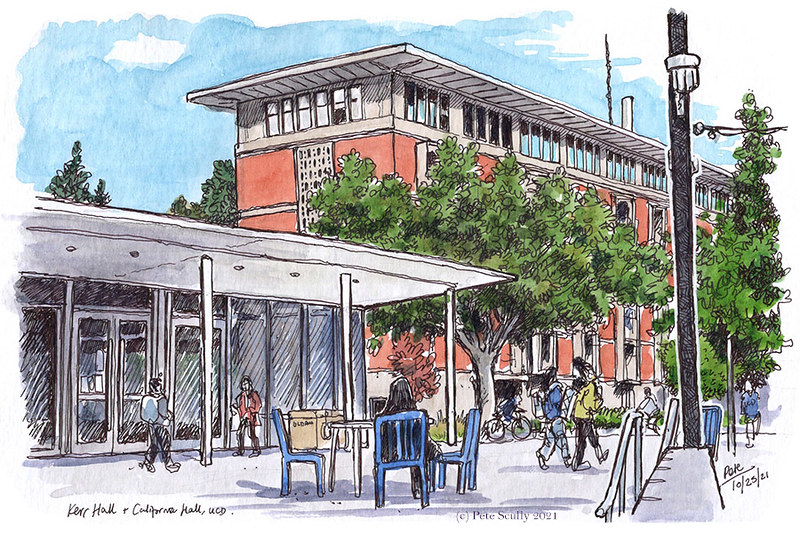 Catching up on posting October sketches still, although November actually ends today. Can you believe it’s December 2021 already? Wow. It’s a good job I finished making this year’s advent calendar already. This year I made an unusual one, not so much a single calendar as 24 plastic baubles on a miniature tree that are opened each day to reveal the chocolate inside. Oh and each one is painted with a Studio Ghibli character, in acrylic, because of course it is. We should have gone to Japan this November, that was the plan. That was the plan last November too. The pandemic put paid to our plans across the Pacific. We were going to Tokyo, and one of the things I wanted to do was visit the Studio Ghibli museum. My son and I are both big fans of those films. We were also going to Tokyo Disney, my wife is a big fan of the Disneylands. I was also hoping to see my oldest friend Tel, who has lived in Japan for ages now. We still message each other, usually stupid messages. My son saw over my shoulder me and Tel were just messaging the word ‘bollocks’ to each other for ages. Needless to say, we aren’t debating Proust. In fact I can already imagine the jokes if we ever met someone who wanted to debate Proust. Still it’s been bloody ages since I saw him, would be nice to go and pay him a visit. I actually had a dream about him last night, or rather I had a dream and he showed up. That happens sometimes, I dream about my old mates. In this dream I met up with him and two other old mates (Rob and Roshan if I recall) and we went to a bar, but I was waiting at the bar so long for our drinks that I didn’t get to spend any time with them, and every time the drinks came they were wrong, and then everyone had to go home, and I didn’t see anyone again for years. I mean, I miss my old mates, but come on, in real life we would probably all stand at the bar while we waited for the drinks. Who knows, dreams don’t make sense. It’s also true that nobody actually cares about your dreams, they are not actually interesting at all. Like, literally the most boring thing is to talk about what you dreamed about. You may as well just say, I had this stupid thought, isn’t it weird I had that stupid thought, I wonder what it means. You happened to be asleep of course so you thought it was real. You never say, I had a thought the other day, and you were in that thought, but you were painted green and driving wheelbarrow made of ham, no people would be like, right, ok mate. That said, back when we were kids Tel did tell me about a dream he had, about Robin Hood and his Merry Men all dressed in skirts and dancing about singing “Don’t F*@k with me, I’m Robin Hood”. That made us laugh all the way down Green Lane. So I turned that into a song. Well a four-song musical actually, which we performed as part of our Expressive Arts drama class at school (though my teacher Mr. Hart made me change the words to “Don’t Muck With Me, I’m Robin Hood”). We didn’t wear the skirts. It went down well, I guess, nobody cared that much probably. I think I played Robin Hood? It was thirty years ago. A few years later, Tel did tell me he never actually dreamed that song, he just made it up for a laugh. So I mean, that’s the same thing.

By the way this is a sketch of Kerr Hall (background), on the UC Davis campus, while stood outside California Hall, the fancy new building in the foreground.