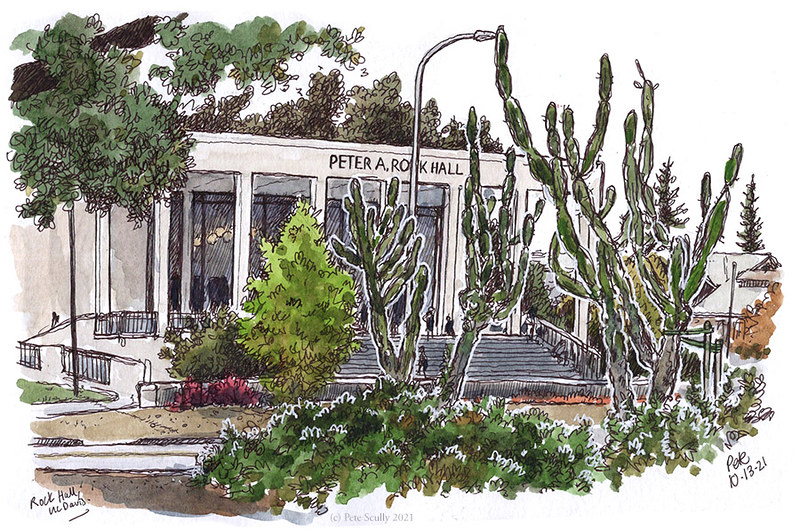 This is Peter A. Rock Hall, formerly known as Chem 194. It was named for former Dean Peter Rock, who was a Chemistry professor and the founding Dean of Math & Physical Sciences, and who passed away shortly after I first came to campus. I’d only been here a few months but I remember how fondly everyone spoke of him. This building was renamed about a decade ago. I always say that UC Davis missed a trick renaming Chem 194 as Rock Hall instead of renaming Young Hall as Rock Hall, because then some smart-alec (me) can say “I remember when Rock was Young”. Instead I have to explain this every time and say, “I remember when Rock was Chem 194”. Which is both marginally funnier and less-marginally excruciatingly dull, which is why I don’t really have conversations very often. In the foreground are some cacti, a prickly subject, and there goes the last of the puns for this post, may they rest in peace. I drew this in mid-October (it is already November, how did that happen?) (don’t explain, I know how it happened) and I have tried to draw as much as possible lately, but still, the subject material is running a little thin, I’ve been in Davis sixteen years. Sixteen years today as it happens, November the Fifth is when we moved here from our temporary stop in Santa Rosa. Remember, remember the fifth of November, innit. Penny for the Guy. Did you ever do that, as a kid, those of you from the UK? I remember me and my neighbour Tasha would sometimes make a Guy, we wouldn’t really go round saying ‘Penny for the Guy’ much, but we did always throw him on the bonfire. May The Fawkes Be With You. (Oh no, the puns have risen from the dead!) Back home, the Fifth of November was either ‘Guy Fawkes Night’, ‘Fireworks Night’ or ‘Bonfire Night’, and I remember once hearing an American news face referring to it as the ‘British Fourth of July’. Which is preposterous for a number of reasons, for one thing the weather is better in November. It makes sense having your main firework event at a time of year when the sun has gone down by 5pm, rather than in the middle of summer when you have to wait ages to set those fireworks off. In England you can get it all done before Coronation Street. Don’t forget to put those sparklers in a bucket of water, kids.

Interestingly, I actually have a mug (that I was given when I was a teenager) that says ‘Peter, meaning the Rock’ on it. I even drew it.