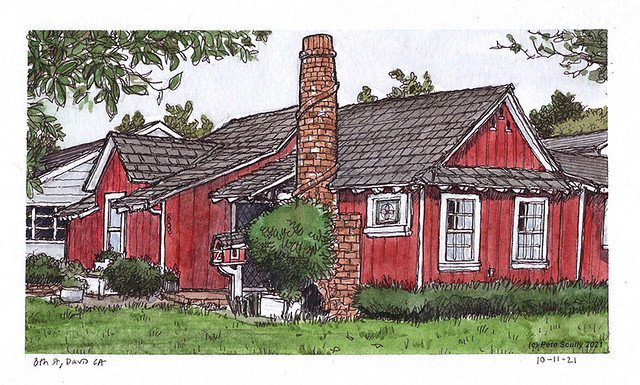 I pass a lot of houses in Davis that I think ooh I would love to draw that house some time. And then I walk on and forget about it until the next time I pass by and think, oooh yes I’d love to draw that house, when I have time. And then I carry on walking or riding my bike until the next time I pass it and I go, you know I should really draw that house some time, it’s so nice. and then I walk or ride or jog along, and forget about it. Until the next time, etc and so on. There is one house though in north Davis that is probably my favourite house in town, it looks a bit like a red barn or farmhouse on the corner, almost Scandinavian in its picture postcard cuteness (it even has a mailbox that looks like a small version of itself). There is a whole barn section around the back, and the circular brick chimney with the little brick spiral going up it is probably the cutest cute-house thing I have ever seen. And no, I don’t watch HGTV (though for some reason it reminds me of Jamie and the Magic Torch). I always wonder about its history, when it was built, was it ever moved from somewhere else (as so many other Davis houses were), did any famous Davisites ever live there, does it have a locally know name that I’m unaware of? Is it haunted? (No, a house this lovely can’t be haunted, because there’s no such thing as ghosts). So on one of my many many walks home from work (since my bike’s been acting a bit weird I have gotten back to walking, I’m killing those ten thousand steps a day, totally whooping that goal) I saw that the house had a big ‘For Sale’ sign outside, well in fact it was a ‘Sold’ sign, well in fact it was a ‘Snooze And You Lose’ sign, not that I’d have been able to afford it, but then again I did buy my current house exactly a year ago so I’m now in the homeowner’s club (I’ve heard it’s a cool club, they meet in a treehouse). So, what if the new owners hate red barns and decide to turn it into a modern brick and chrome palazzo? Or paint it taupe? Or rent it out to conspiracy cultists who never mow the lawn? You never know, so I decided right, I should draw this beautiful building. But you know, I was walking somewhere, I didn’t want to stop. I do feel self-conscious drawing houses too, even now; it would be nice if the City of Davis gave me some sort of card that I could show people to say “local urban sketcher, totally normal, just ignore”. So I decided to draw from a photo. I don’t mind drawing from photos, if I have at least drawn the backbone there and then, but straight from the photo I don’t get the sense of personal depth that comes from seeing the space with my own eyes. It’s why I’m always a little hesitant about commissions, unless the reference photos are at least close to what I would see from my own perspective. I’ve done quite a lot of house commissions in Davis by the way, and I do usually like to go and take a quick sketch on site or at least take a couple of photos that would mimic my on-site style. I dunno. It’s not always true, depends on the thing I’m drawing. Also, I find that when I paint at home sometimes I’m doing it in living-room light, and the colours end up a bit darker, unlike when I’m out on the street in the light of the outside. I think that shows sometimes. Anyway with this one, I drew right from the photo I took, but I decided (for some reason) to put some masking tape around the edges of the paper in my sketchbook and draw and paint right over the edge, and then peel the tape off at the end to reveal a perfectly straight-edged rectangular frame. It worked when I did some watercolour studies recently, though in my sketchbook it feels a little too…I don’t know, flat? I’m used to scruffy edges. Years ago I used to draw frames around my sketches, but almost never with a ruler – the straight, straight line is really out of place with my work, give me a slightly wobbly line any day. I used to have items like lap-posts, stop-signs, trees, hydrants that would pop out of the frame, like Deadpool breaking the fourth wall (but much more PG-friendly). If I were to do that here I should have had the chimney break the frame. Still, it’s a lovely house and I’ve drawn it the best I can in a smaller-than-I-usually-draw rectangular frame, even though it has a kind of ‘Drawn-by-Pete-in-2009’ feel to the style.