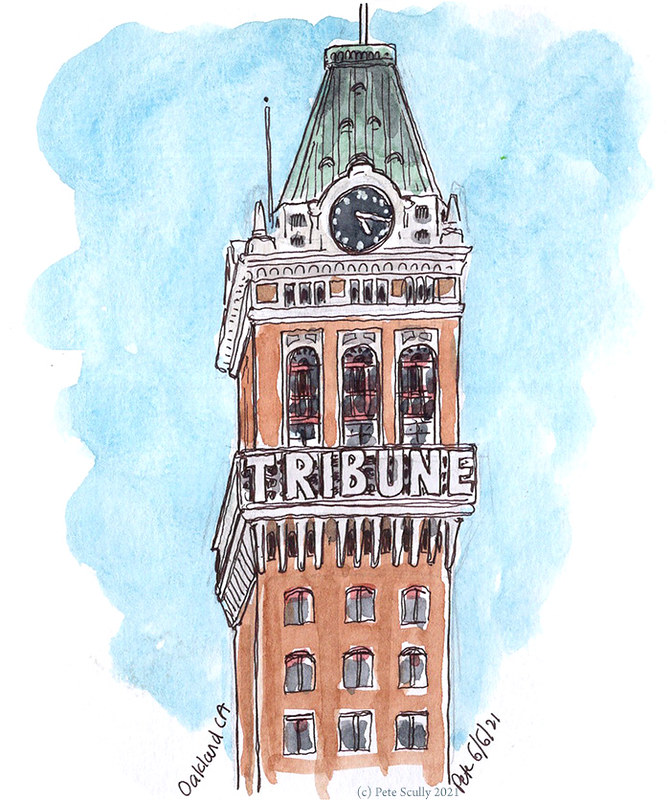 Despite living here in northern California since my twenties, I had never been to Oakland. Never! Well, I’d been through it on the BART, on the way to San Francisco, but that’s not the same. And we flew out of and back into the airport once. or was it twice? Also, on my very first trip to the US, way back in 2002, my future brother-in-law took me to a baseball game at the Coliseum, where we watched the Oakland A’s play against the Cleveland Indians. That was back when the Indians had their old ‘Chief Wahoo’ logo. It was the first time I had experienced American sport, and it was completely different from going to the football in England. There were families there, they all did this ballpark song after about the seventh innings, you spent most of the time getting food and beer, but they had TVs in the food line and the toilets so you could see what was going on, and then there were the garlic fries, an experience I’ll never forget. So anyway that was my only experience of Oakland, and since living in Davis, I had never actually been to Oakland proper, walked around, sketched. Why not? I’m not entirely sure, but I don’t go down to the Bay Area very often and usually just go to San Francisco, and occasionally Berkeley. Oakland was never talked about as “oh you should go to Oakland, yeah”, more “oh you should not go to Oakland, yeah”, usually making references to the murder rate. So I had just never been. That’s not that unusual really, I wasn’t actively avoiding it, just never got around to it. There are places in London I’ve never been. I’ve never been to the Thamesmead Estate. Bad example, actually, that’s hard to get to from north London and has a bit of a crime-y reputation. (So maybe it’s a good example?) Ok, well I’ve never been to Fulham. I’ve never been to Richmond Park. I’ve never been to Putney, supposed to be nice there, I’ve never bothered going. Further afield, I’ve never been to Wales. I’ve never been to Bournemouth, or the Peak District, or Hadrian’s Wall. So Oakland is just another place that’s just there, it’s not going anywhere, and I’ve just never really gotten around to going to. So a couple of weeks ago I decided fairly spur of the moment to put that right. I got on a train to the Bay Area (see my previous post if you don’t believe me), jumped on the BART at Richmond (and it was a very modern BART, much has changed in two years), and got out at 12th Street Oakland. It was a Sunday lunchtime, and was pretty quiet. You had the usual characters shuffling about that you get in any big city street, no more than Davis really, the fact it was a Sunday meant it felt a little bit empty of usual foot traffic. Not a lot of people come to hang out in downtown Oakland on a Sunday, like many American cities actually. I knew I wanted to go and sketch the tall tower of the Oakland Tribune (‘Tribune Tower’; not really used by the newspaper any more) so I found that, stood by a bus stop and sketched the top of it. I didn’t know what to expect of downtown Oakland, so I thought I could maybe draw this, look around, and if nothing else seems interesting I’d just jump back on the BART to Berkeley, which I at least already know. I ended up staying the rest of the afternoon in Oakland, just exploring a bit, and I’m glad I did because I found a few gems, and a vibe I don’t find in San Francisco, and certainly not Davis. 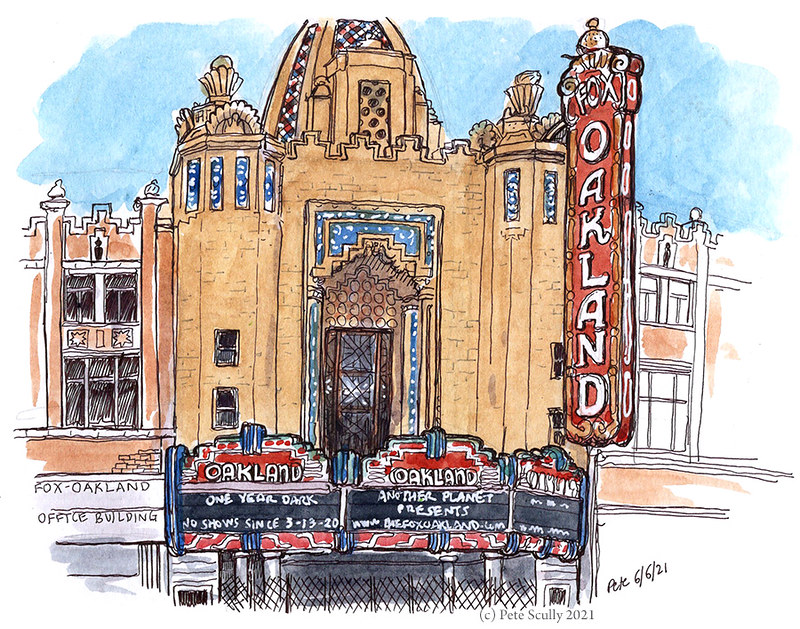 I wandered about, not exactly sure where to go, having no real orientation for the area. There’s nowhere in downtown Oakland that anyone has ever recommended to me to go and sketch so I was climbing free solo. Ok, I wasn’t climbing free solo, I was walking around a few streets within a block or two of a BART station, I’m hardly doing the Appalachian Trail. I followed my nose though. I drew a fire hydrant (below) because they look a bit different, and you have to capture one wherever you go. Then I found the beautiful Fox Oakland Theatre, with the big Oakland sign, and found a doorway with some shade across the street to draw it in. It opened in 1928, but as the sign says it has been ‘dark’ since 3/13/20, that fateful day when These Unprecedented Times began. I always struggle to capture the grandness of a tall ornate theatre on a small Moleskine page, but it was too sunny to stand beneath it and draw with a sense of perspective so across the street in a shady doorway I hid. The building closed in the mid-sixties and was used only occasionally for a number of years, and in the mid-seventies they nearly tore it down and put up a parking lot. But Oakland knew what they had before it was gone, and so plans to Joni the Mitchell out of that old building were scrapped and it was placed on the National Register of Historic Buildings. Eventually it was restored and refurbished, and reopened in 2009 as a concert hall. Now of course, still closed during the pandemic… but that’s changing, and on their website it looks like shows have been announced from September, people like Wilco, Judas Priest, and… Madness! Apparently Madness will be playing there next May. Wow! Might have to look into that. 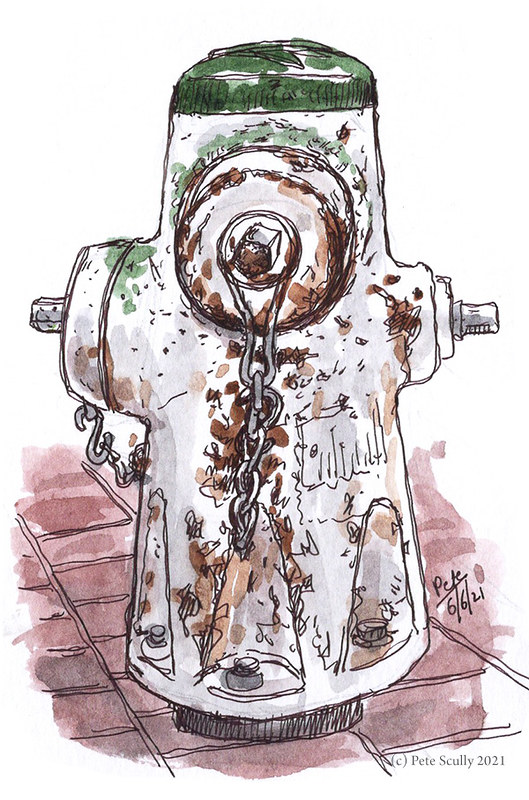 I got hungry. I had passed a sign for “Gus’s World Famous Fried Chicken” earlier, and that sounded good. I mean it’s World Famous so it must be good, right? I ain’t joking – best decision ever. I got a three piece meal of white meat chicken, and WOW it was huge, and absolutely delicious. This was no KFC, no late-night London pre-night-bus chicken, this was a lot of tender meat with the most amazing batter, spicy with the hot sauce but with refreshing coleslaw to offset it. I sat inside the restaurant (good choice, this would have been too big to eat out on the street), and the server was really friendly.  Made the whole day trip worth it. 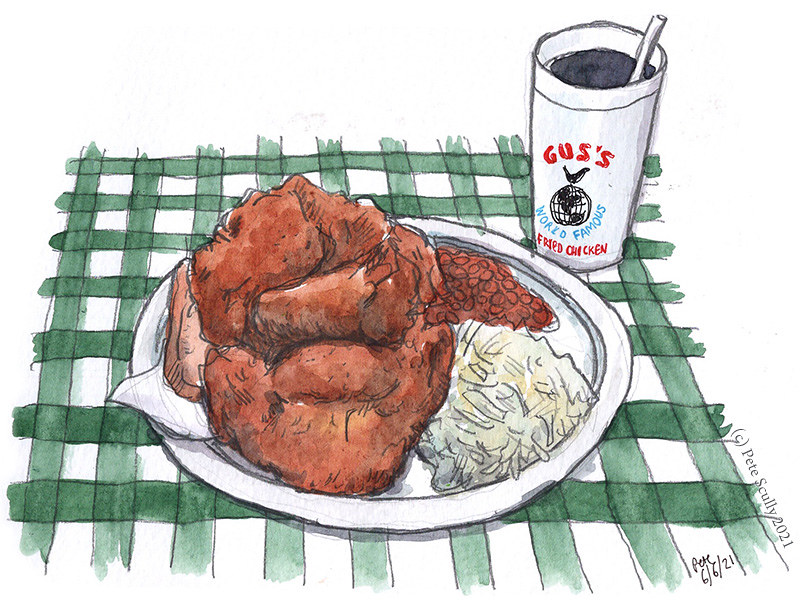 I wandered about some more. There are lots of murals in downtown Oakland, particularly in support of black lives matter, and black rights movements in general. Oakland is a well known African-American community city and many prominent black figures have come from Oakland, such as Ryan Coogler, the director who made Marvel’s Black Panther (the opening scenes of that film are set in Oakland) as well as Fruitvale Station. MC Hammer is from Oakland. Oakland is also the birthplace of Vice President Kamala Harris. I wandered around a few blocks, looking for something to draw. Outside a bar there was an open sir seating area fenced off, with loud music playing. I saw that there was a drag artist singing (actually miming) and dancing along to songs from Madonna and the like, putting in brilliant colourful performances. It looked like there were several performing one after another, not to a big crowd, just a few seated people drinking, but it was pretty magnificent to watch. It’s Pride Month, I think it was related to that. So I listened to the music and drew nearby, this old building on the corner of 15th. Further down the street, I came across a small gallery that was closed, but the name jumped right out at me: “Burnt Oak Gallery“! It was clearly meant to be. I didn’t have a lot of time until my BART back to Richmond (they aren’t too frequent on Sundays), and I got the train back to Davis having finally checked Oakland off my list, and I will be back for more of that fried chicken. 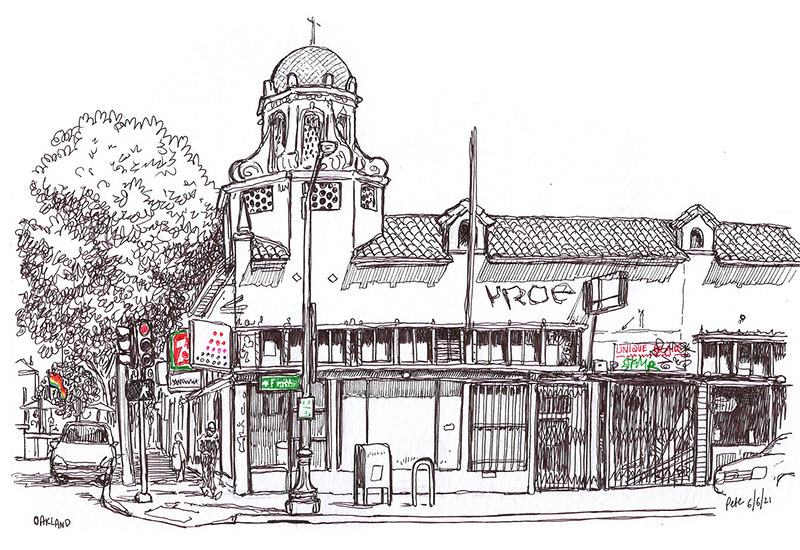