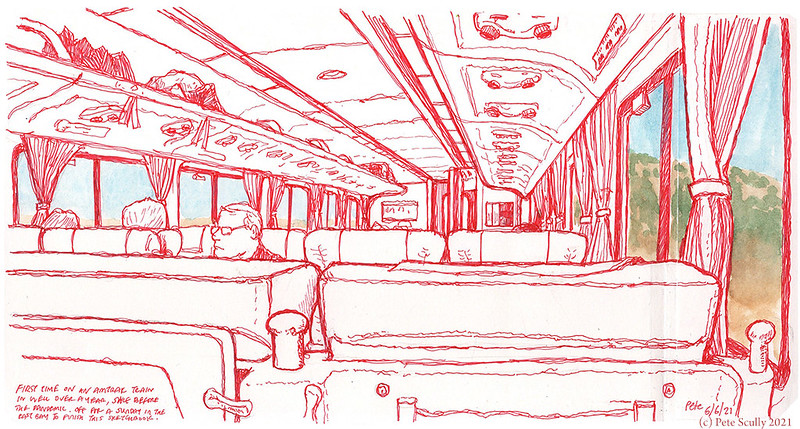 After a very long time, I finally went on a train. On public transportation, first time since the start of the Strange Times. It was a big step. California is Opening Up, I’m all vaccinated, and I needed to get out of Davis for the day. So, I took the train down to Oakland, a city that I’ve never actually been to. Amazing isn’t it, I have lived here for sixteen years and yet never been to Oakland. Well I say I’ve never been, I’ve been through it on the BART many times, and I’ve been to the airport once. On the very first trip I took to the US in 2002 I even went to watch the Oaland A’s. I have never been to Oakland proper though; I will post the sketches another day. For now here is the sketch I did in red pen on the Amtrak train to Richmond (I got the BART after that to Oakland). This was the very last page of the Moleskine sketchbook (Sketchbook #39). I liked it do much that a week later I went back on the train, this time heading for San Francisco, where I spent an overnighter exploring and sketching. Another post for that. I opened a brand new Moleskine sketchbook (Sketchbook #40) and on the first page I drew the purple pen train sketch below. People wore their masks except when drinking or eating; the group in front of me here were all cyclists. The trains are never particularly busy when I get on them so it felt quite normal really, and I was I admit delighted to be on the train again. It’s been two years since I had my last sketching day out in San Francisco, amazingly. Every time I travel I think, I’m not going to draw the train again am I, but then I’m there and I think, yes I am actually. Here’s the album of most of my in-voyage sketches (planes, trains and…other trains): https://www.flickr.com/photos/petescully/albums/72157671776646978 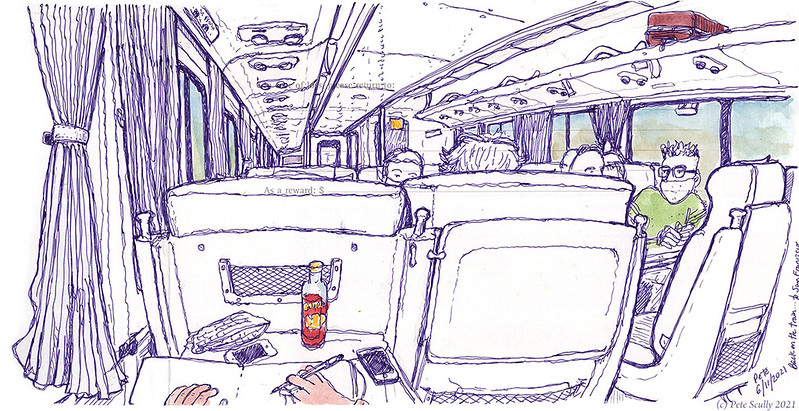