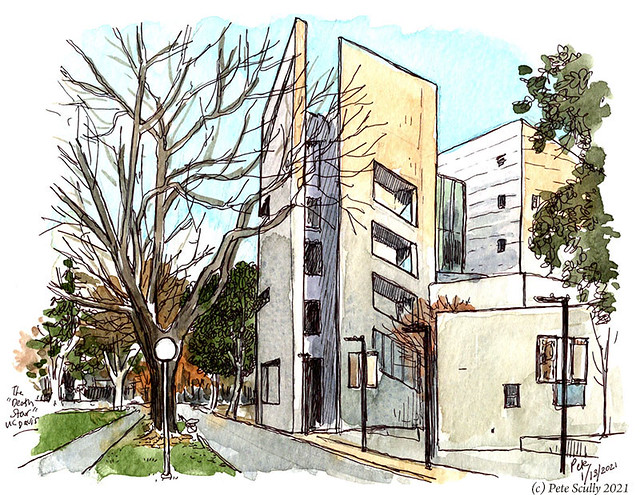 This is the Social Sciences and Humanities Building at the UC Davis campus, also known as the Death Star, despite being incapable of hyperspace travel and having zero giant superlaser weaponry, at least that I am aware of. It’s a complicated structure, and I always get lost on it. I would have been terrible on the real Death Star, I’d never have made it out just by running around. Similarly, if there are meetings in a part of this building I’ve not been to often I will definitely be 10-15 minutes late while I get lost in the Escher-like architecture. Not a problem any more now we are all Creatures of Zoom. I drew this building after working at home all day, and at the end of the day before the sun came down I felt the need to get out of the house, so I went down to campus and drew this quickly. January keeps moving along. 2021 keeps dragging 2020 along with it. I’m writing this post early in the morning after one of those nights where I fell asleep very early (on the couch after dinner, with a headache, having been up very early yesterday morning to watch Tottenham play Sheffield United on TV) (if someone had told the teenaged me that in my mid-forties I would be living in California during a global pandemic and getting up at 6am to watch Spurs play Sheffield United I would have said, yeah that sounds about right. “Oh but Spurs are wearing green shirts.” “WHAT!?!”). It was a sleep last night littered with the mad dreams, all over the place, all sorts of things going on. I’m usually back in London somehow during these dreams, they were the sort of dreams that take me a few hours to get over when I wake up, which I did today at about 4:30am. So I got up, and listened to podcasts about football tactics and X-Men, listened to some Belle and Sebastian, they always fix my mood, and I’ve been trying to draw a picture of Boulogne Sur Mer, which is taking longer than it takes to cross the English Channel. I started a new virtual sketch tour, since there’s no travelling, I’m going to go on a virtual Tour de France. I drew Calais already. I should miss out Boulogne, but it’s impossible, since they go hand in hand from a British day-trip perspective. The sun is coming up now and I should get ready for a morning run but these quiet dark pre-dawn hours I always feel I need to learn stuff, practice a language, work on my drawing, write something interesting, achieve something to start the day with, but that sun keeps on coming up. It’s windy out there today. New week, wonder what fun it will bring.