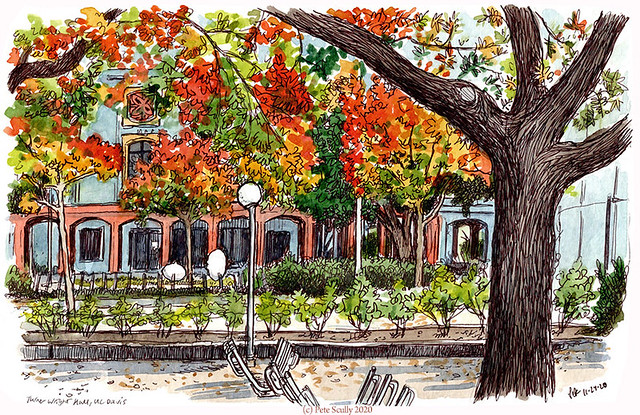 Last month the leaves in this town just exploded in all sorts of colours. When I say all sorts I don’t mean blue or white or mauve, but most of the other colours in the spectrum were represented there somewhere. My paint box was jumping up and down for me to get outside and put some of this into my watercolour Moleskine. Happy to do so. It was a short period when I couldn’t wait to get outside. Right now, on the Sunday after Christmas, I don’t want to leave the house, or get dressed, but that’s normal. We’re still working from home, though on vacation this week (officially it’s curtailment), but I still have to go to campus every so often to do stuff at the office, and get to take free weekly COVID tests now too. So coming onto campus I took the time to catch some of the colours there. Above is the view of Celeste Turner Wright Hall (drawn it before) which is one of the most gloriously autumnal spots on campus. You can see Robert Arneson’s Eggheads there still arguing beneath the leaves, like Bert and Ernie. These colours bring me a lot of joy. Without sounding like some sort of uplifting Netflix show host (something I have never been mistaken for), it’s good to focus on things that bring you joy. For me, interesting chord changes in songs, the smell of a French bakery, the sun setting over a city as seen from a train, Tottenham beating Arsenal, but nothing quites matches the joy brought by bright colours of autumnal leaves. 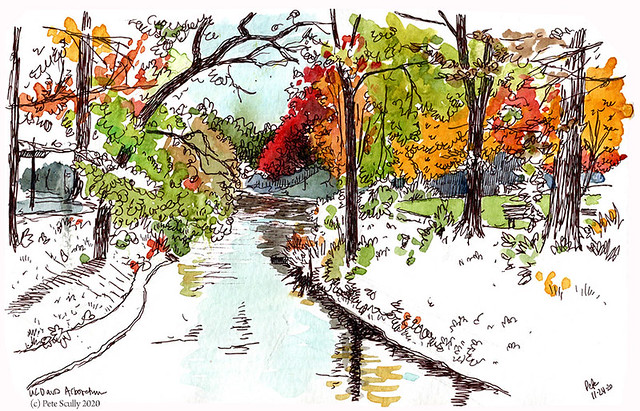 I drew the above fairly quickly while stood on a narrow bridge in the Arboretum. There was no way I could really catch all the sensations of the colourful leaves, but also quite a few people were crossing the bridge and stopping to take photos. I stayed as socially distanced and masked up as possible. A lot of people were having photo sessions in the yellow gingko trees nearby, as they were dumping their leaves. I bet that gives the trees a lot of joy, the feeling of dumping their leaves at the end of a busy year. I know how that feels. I wonder if the trees know about our pandemic this year? Actually, no I don’t wonder that. I know scientists have discovered that trees do feel and communicate, in their own tree-like fashion, but they probably don’t check the internet or read the papers (probably a sore subject too, paper), and probably haven’t noticed all the masks or social distancing any more than I’ve noticed what the mayflies did this year. They didn’t have to read retweets of all of Trump’s endless rage tweets. They’ve never used Zoom. They also didn’t have to watch that ‘Imagine’ video. But they do get to that point in the year when they are like, right here goes, here’s all the colours, there’s all the leaves, see you in the spring dudes. I like trees, they do their thing. That said I also like things like wooden chairs and guitars and paper, so the trees probably don’t like me back. 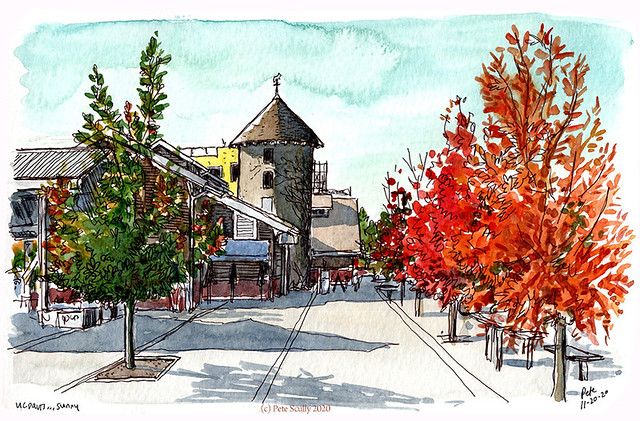 Above and below, the fiery trees around the Silo. They really blazed a bright reddish orange for a bit, before throwing off the leaves in a tantrum, all at once. When I drew the scene below it was rainy, a rare occasion here, but I stood under a tree and drew what I could, adding the rest in when I got inside. I’m glad for rain, after the year we had. For a lot of trees, the blazes have not been metaphorical. This years fires have been awful, we lost a lot of trees in California and beyond, some very ancient. The trees had their own really bloody rubbish 2020. But when they make it this far, beating the fire season, and bursting into displays of colour as an expression of boundless life, it’s like they are sticking a huge two branches up at the deadly seasonal fires; they made it to the end of the year, long may they make it beyond. Drawing these colours brings me joy, no doubt, and I’ll post the other ones I did in the next post. Just before Christmas the UC Davis Staff Assembly sent out a message to all staff thanking them for their efforts with remote work this past year, and included a link to some of my campus views to have a look at, in case (like me) they might be missing campus. And I am missing campus. I can go whenever I want, it’s only ten minutes bike ride down Oak Street for me, but it’s not the same. So much is closed, so few people are around, the campus atmosphere just isn’t there right now. But it will come back. I can’t see it happening that quickly, and even when it does it will inevitably be gradual for a lot of people, something I’m very sensitive to, but we will come back, things will return. That’s something that will definitely bring some joy. 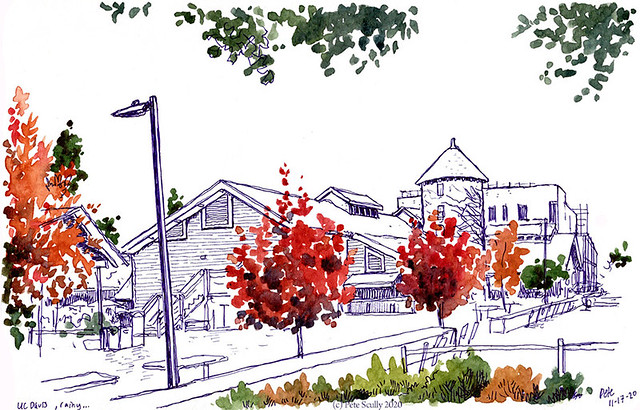