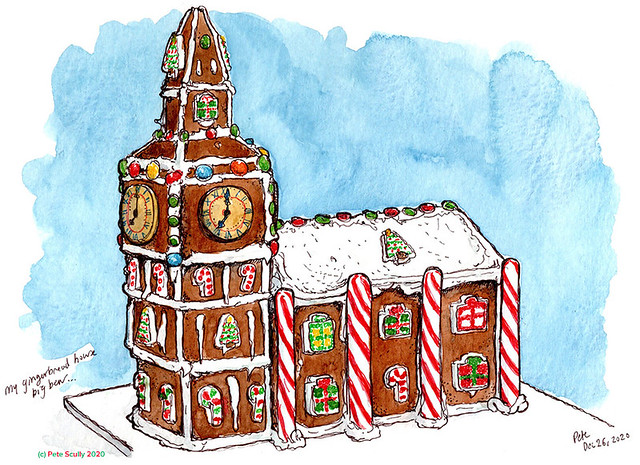 It’s Boxing Day today, and we’ve had a nice Christmas at home this year, seeing family only via Zoom or Facetime, like so many others. I’ve had rather a lot of snacks and spent a fair bit of time on the couch. I’ve not been drawing much lately, although looking at my blog posts I realize I’ve still got tons of unposted sketches to post yet (I had a bit of a flurry in November when the leaves were all crazy colours), but I’ve not been writing, I suppose maybe not had the mental energy for writing. What a year. However I did make a gingerbread house! I made it two weeks ago, and it still smells amazing, and is still holding up very strong. It’s the first time I ever made a gingerbread house from scratch as opposed to from a set, and yeah it took a while with a good bit of measuring and planning and cutting out bits of card to measure out the gingerbread dough pieces (which of course expanded in the oven), but it all stood up well, incredibly, and yes as you can see it’s a gingerbread Big Ben. I am pretty proud of it. We had a virtual holiday party over the Zoom for work, and one of the games was a gingerbread house contest, which I had great fun with. I used gold-foil chocolate coins for the clock faces and they look nice reflecting the christmas tree lights. Take my word for it. So tonight, I drew it. First sketch in a while. I should definitely keep it for New Year’s Eve, since we Londoners go down to hear Big Ben’s bongs to ring in the New Year. Actually I only ever did that once, and that was when 1999 turned into 2000, and this was way before social distancing. Two million people on the streets, and I was right below Big Ben with my nephew on my shoulders, and the fireworks were loud, and then we had to find the rest of the family, and walked with throngs of people for miles up to Euston, and that’s the only time I’ve done that. 21 years ago! 21 years is a mighty long time, as the Dartmoor prisoner once sang. Anyway, I made a Big Ben because I was missing London a bit, and yeah I know it’s the bell not the tower (I did decorate a bell-shaped cookie but I ate that). Fun fact, until the tower was renamed Elizabeth Tower (after the Queen, for one of her many many jubilees), I used to ask tourists on my open-top bus tours if they could “tell me the name this clock tower?” when our bus would turn into Parliament Square. “Big Ben!” They would all call out, but it was of course a trick question because it was just the Clock Tower. But I said they could call it Big Ben anyway, nobody cares at all. Like Frankenstein’s monster not caring if people called him Frankenstein, it’s fine. Like Grogu not caring that people who now know his name keep calling him Baby Yoda, although to be fair nobody does that to his face in the actual show. Like Alan Dale always being called Jim Out Of Neighbours, despite having a long international acting career after (see also Mike Out Of Neighbours). So yes, it’s fine to call it Big Ben, because I said so. Just don’t call Tower Bridge “London Bridge” because haha you tourists. 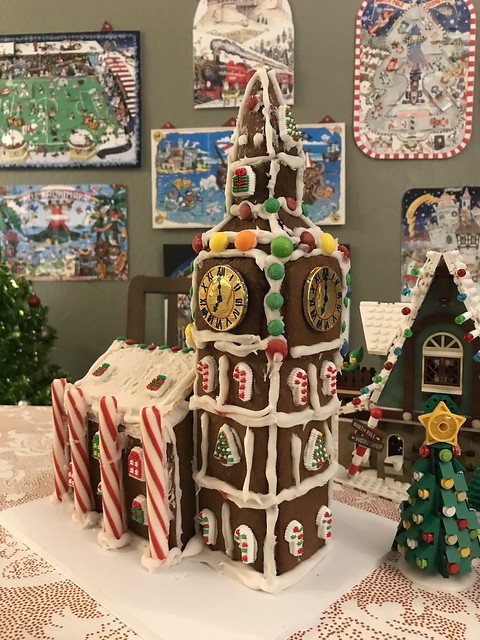 One thought on “gingerbread time”