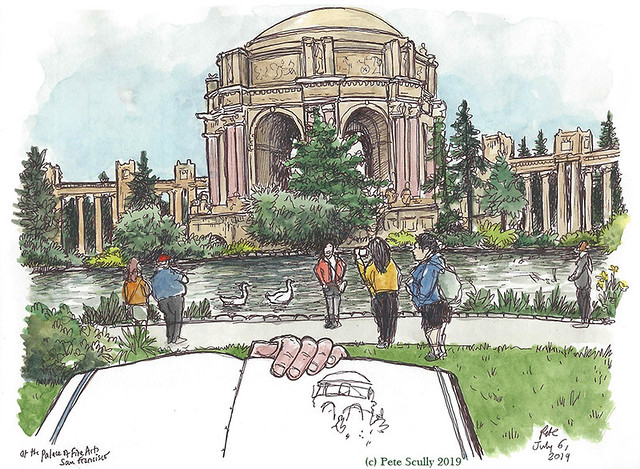 I usually sketch standing up, except when I sit down. On this occasion, I had just walked two and a half miles from Fort Point along Crissy Field and over to the Palace of Fine Arts. I needed a rest. I sat on the grass in the shade. The last time I sketched this building was in about 2007 I think. Yes, a quick look through Flickr and here they are. It’s a nice spot that I evidently only go to every twelve years. See you in 2031. 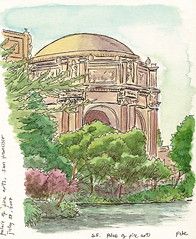 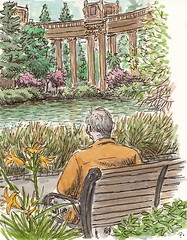 I walked down Chestnut and had a delicious lunch at Squat and Gobble, before jumping onto a bus and heading to my favourite part of the city, North Beach. I usually sketch standing up, but on this occasion I brought my little lightweight fold-up stool with me. At least two people stopped while I was sketching just to take a photo of this little stool, and enquire as to where this mystical object could be purchased on the wild realm of the internet. It was about $15 on amazon, a no-name brand, it is super light and fits into my small bag and I haven’t yet fallen off of it. I have lost weight recently which helps. Anyway I found a little nook beside a church on Columbus and drew the Italian deli Molinari, another favoured sketching subject of mine. 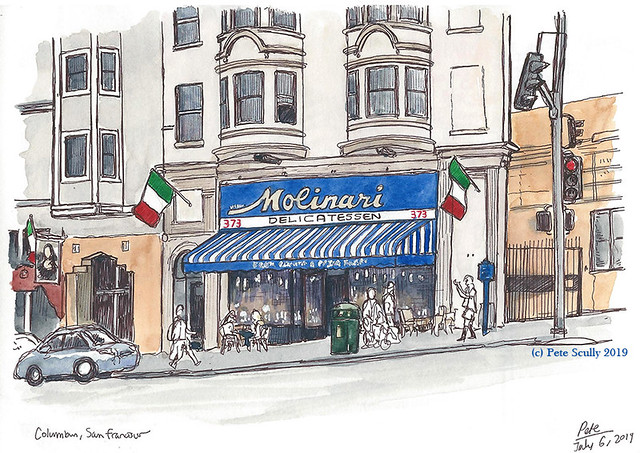 Yes, there it is below, as sketched back in 2014 from an entirely different angle. On that occasion I pretended to be a traffic warden for an older lady who wanted to park her car there while she popped in to get some cheese or something, she said that if I looked like a warden then other wardens wouldn’t give her a ticket. I’m just there with my sketchbook so I’m like, yeah fine, but no other wardens came up and ticketed her. 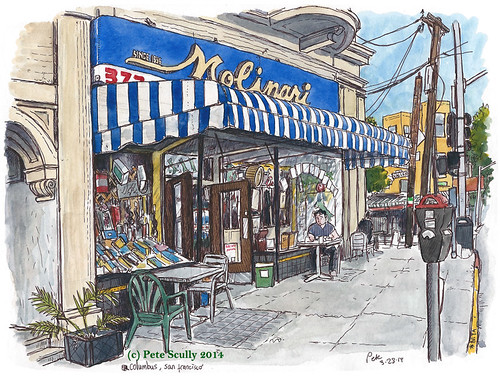 On this occasion though, on the other side of Columbus, I had several non-stool based and non-traffic warden based conversations. One was with an old student from our department who happened to be walking by with her son and her sister, that was a nice surprise. There was another couple who were late for early dinner, and I used the power of the internet to help them find their restaurant, like a street wizard. There was an older fellow who I thought was homeless, who came and sat next to me for a bit with his big bin-liner, and it turned out he too was an artist, and showed me his incredible location drawings of North Beach (this is what was in his big bag), including Molinari sketched from the same spot (but in greater detail). I was very inspired. We talked about drawing out in the street, I told him about my attitudes toward urban sketching, it was a very nice meeting. And then after that I chatted with a monk, in full monk’s robes, who worked at the church next to where I was sketching, and he showed me a sketch of the church someone else had done for their newsletter, and we talked about San Francisco’s trees being different from the ones in Davis. Sometimes it is nice to talk to people in the street in a city like this. 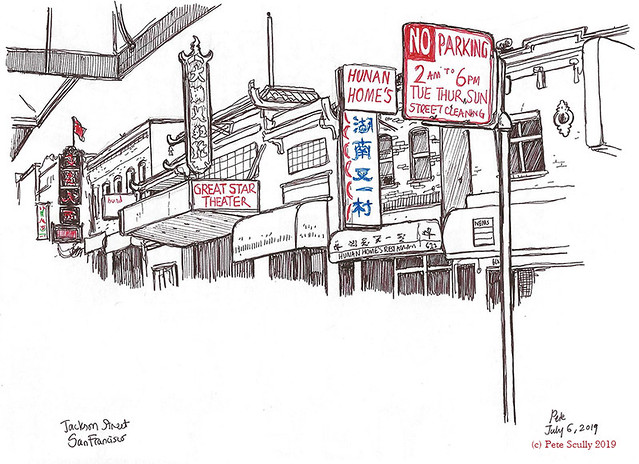 I moved along, and down into Chinatown. I wanted to draw one specific row of buildings in Jackson Street. I didn’t have time to draw it all so I captured the essentials. I got enough. When I say I didn’t have time, it’s because I wanted to factor in time in the rest of my day to hang out at an old North Beach drinking establishment that I have never before been into, the Comstock Saloon. 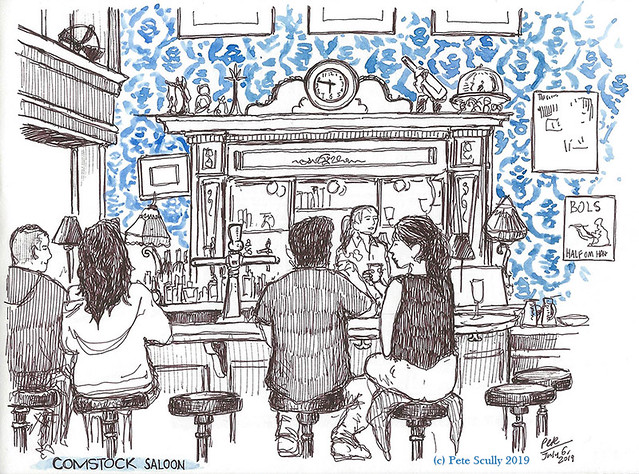 This old bar is beautiful, and they are very good at mixing their drinks here. For this reason I wanted to have a couple of cocktails. Now I usually stand when I sketch, but here I wanted to sit. I sat the bar, wrong angle to draw. I sat at a seat by the window, with a barrel for a table, again not super comfy. So I sat at a taller table, excellent angle. However I felt very conscious that people coming in might want to sit at that table, which is better for two or three than for one. I don’t know why I felt so conscious of that here. It felt like a nicer place. Also, I noticed that occasionally some of the tables would have a little ‘reserved’ sign on them, which I think was to deter single patrons from using spaces that a pair or trio might use. So, I drew very fast, and then just relocated myself to the bar. The staff were well dressed and clearly professional barmixologisters or whatever the phrase for them is. When it comes to mixed drinks I am clueless and need a list. I had an absolutely amazing daiquiri, totally beautiful after a day of sketching. The second drink I had was a Mint Julep I think, it was less to my taste but nice nonetheless. You can taste quality. The best mixed drink I ever had was in Hawaii, the Monkeypod Mai Tai, and it was amazingly fresh. I feel a bit posh drinking anything that isn’t beer, or Pepsi Max, or a cup of tea. Libations libated and sketches sketched, I walked back to the Amtrak bus and took the long journey back to Davis. I felt a bit more creatively refreshed, San Francisco is good for that.