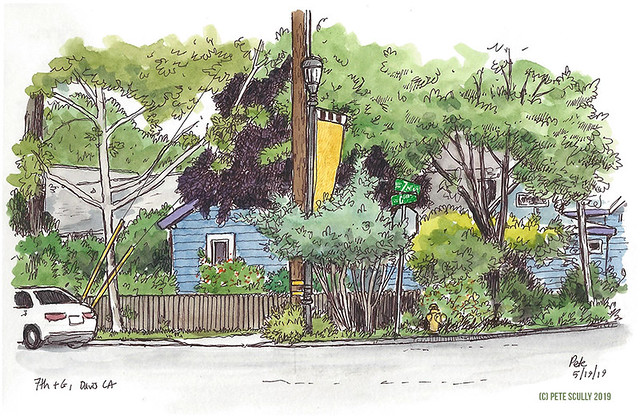 Just over a week ago some of us Davis sketchers braved the stormy weather and came out to sketch Old North Davis. This is the neighbourhood north of Fifth Street, laid out just over a century ago, full of leafy streets and cute houses. We met at the Davis Co-Op on G Street, and spread out to sketch. I drew this corner, at G and 7th. It wasn’t yet raining again so I was making the most of what I could get before seeking cover again. Actually I like rainy sketching, I just put my umbrella inside my jacket, it seems to work. 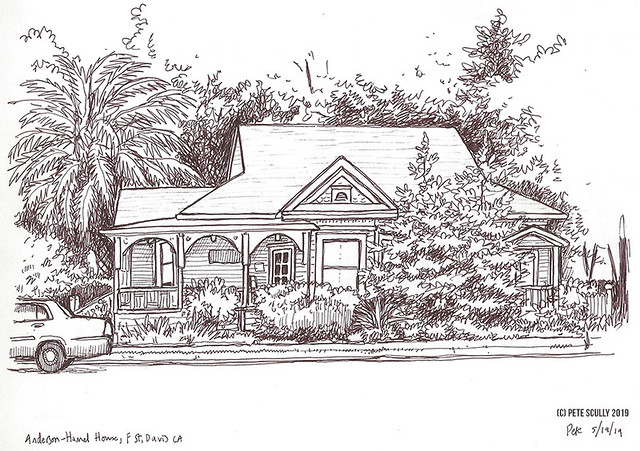 I’ve always liked this building, historically called the Anderson-Hamel House. I have sketched it before, and pass by it most weekends when heading downtown. It’s a ‘Queen Anne’ cottage and was originally the home of John B. Anderson, who established the Bank of Davis and was actually the mayor of Davis when Davis first became a city in 1917. One of the interesting things about this house is that it was originally down at 2nd Street, but was moved when later owners the Quessenberry family decided to build their drugstore there, and so the lovely house moved into Old North Davis. Its history is detailed well in John Lofland’s book ‘Old North Davis’, an absolutely invaluable guide to the area, street by street, hosue by house. I recommend it for anyone interested in this part of Davis (I for one would love to do one where I get to sketch all the buildings). 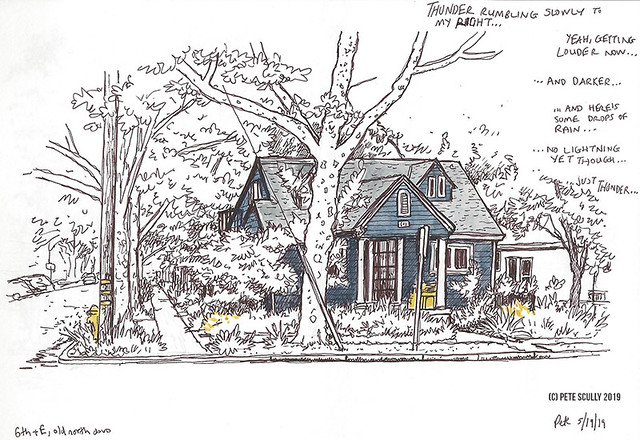 I then sat in the Lyda Williams memorial garden on E Street and was going to sketch from there, sat on a bench in the hopeful sunshine, but a local cat decided to come and sit on my lap for a while. Ok little cat, that’s fine, just have a nap there, my feet need a break anyway. Thunder started rumbling, getting closer and closer. Eventually the cat got down and went under the bench, and I sketched this house on 6th and E. It’s very peaceful here, people out on their Sunday strolls around the neighbourhood. Someone I’ve met before called out to me “nice day for a sketch!”. The thunder rumbling more loudly above me was making me go a little bit faster. In the end I left it where it was and headed back to the Co-Op, just in time for the rain. 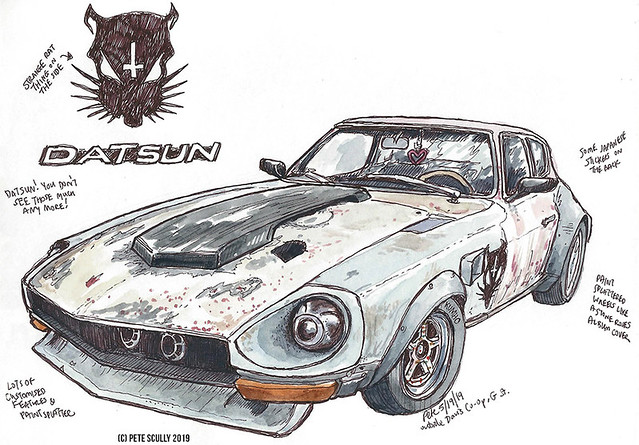 The car above was parked outside the Co-Op, a Datsun (don’t see many of them nowadays), and I actually sketched it at the start, but only got as far as the headlights, the windscreen and the overall outline, I had to finish the rest afterwards, because the driver came and drove away. Not sure what the funny rat symbol was on the side, but the car was very souped up and personalized, with paint splatter and special features, it was like a Stone Roses record cover. 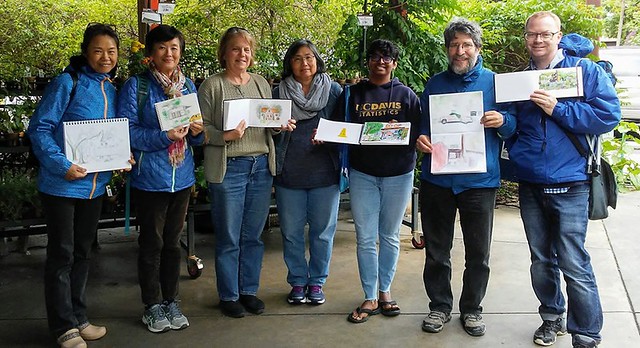 And here are the brave sketchers who sketched Old North Davis. We’ve yet to determine the date of the next Davis sketchcrawls but we’ll post them very soon.