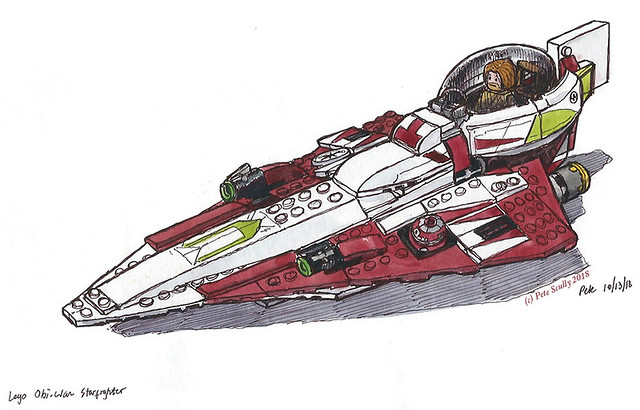 More Lego sketches! These are the mid-prequel-era Jedi star-fighters of Obi-Wan Kenobi (above) and Anakin Skywalker (below). The Obi-Wang ship actually comes with a huge ‘hyperspace ring’ (because one-man fighters this small don’t have space for an internal hyperdrive). I like the simple, sleek design, like a paper airplane, or a teeny-tiny Star Destroyer. The droid, R4 (or ‘Arfour’ as in ‘Arthur Daily’) liked to deal in dodgy motors and go for a drink down the Winchester. One thing always bugged me though. In Attack of the Clones, when Obi-Wan flies one of these to Kamino, Mace Windu orders him to apprehend Jango Fett and bring him back to Coruscant for questioning by the Jedi. But look at that ship! How’s he meant to do that? It’s not like there’s tons of room. Is he going to sit on Obi-Wan’s lap? Think, McFly, think! 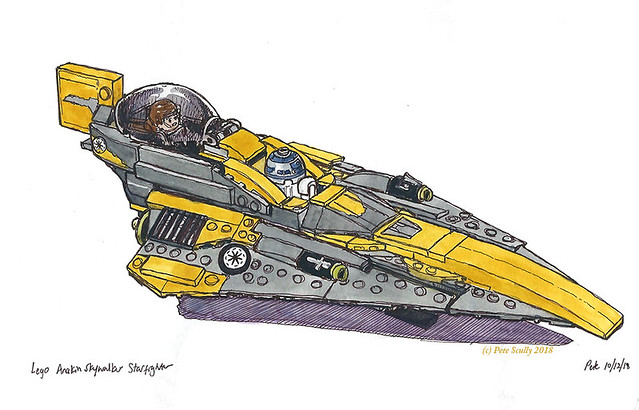 Anakin’s Delta 7B fighter is a similar but not identical design (Obi-Wan’s is technically a Delta-7 Aethersprite-class light interceptor). The R2 unit sits in front of the cockpit. That must be awkward as you can see, because he’s always looking sideways. He’s going to be very uncomfortable like that. This ship didn’t appear in the movies but turned up in some of the animated media. I wish Lego had designed a more pointed nose but I suppose they didn’t want to take kids’ eyes out.

Flashback to last year…I drew their later versions, the ones flown in the opening sequence of Revenge of the Sith (which were trashed on Grievous’s starship). First up is Obi-Wan’s red and white (or grey here in Lego), Eta-2 Actis-class interceptor. Yeah I never knew it was called that, I looked it up. Later in the movie, when he flew to Utapau, he had a cool looking blue and white one, but he had to ditch that one too after Order 66. I love this design though, kind of like a B-Wing cockpit and a tie-fighter mixed with a speeder. If I lived in the Star Wars universe, this would be my vehicle of choice, you can keep your Falcons and Slave Ones and X-Wings. Well maybe I’d have this for space and a Snowspeeder for when I’m on-planet. 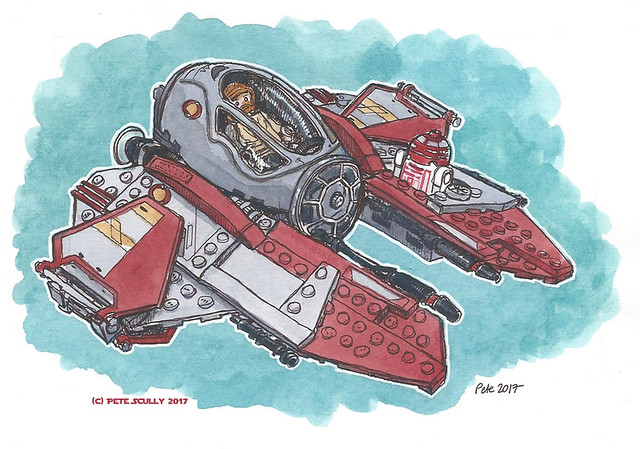 And then there is Anakin’s one. He later flew a dark green and grey one, once he started turning to the Dark Side, abandoning his previous love of yellow vehicles. Later on, he only flew in black (or sometimes very very dark grey). You can see how this design could mould into the classic Vader TIE-fighter. I wonder what that would look like in yellow? I bet the Emperor told him he wasn’t allowed to paint it yellow, he’d ruin the Empire’s whole aesthetic. 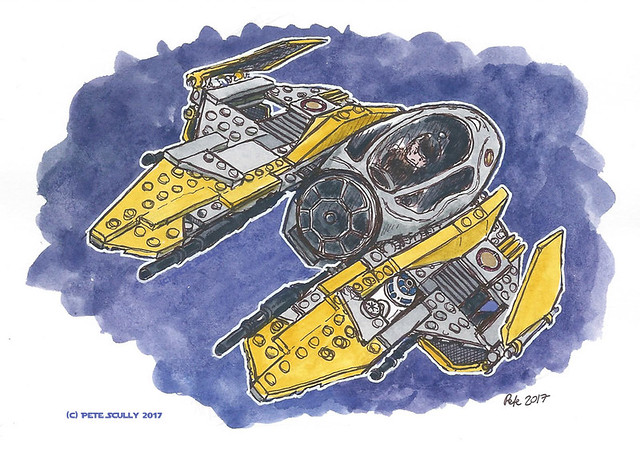 One thought on “on and on across the universe”