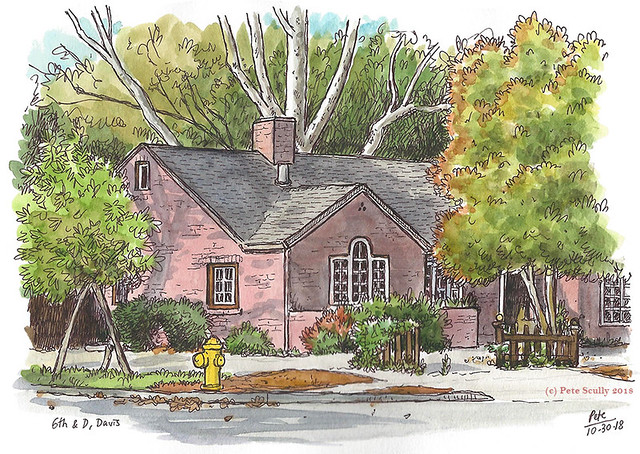 On a corner of Old North Davis is a house I drew at the end of a crisp sunny October day in 2008. I remember I left work early that day, and cycled up beyond 5th Street, still then a fairly unknown country for a South Davis-dweller such as me, to the Old North neighbourhood, looking to capture some of its old America charm with the autumnal leaves. That sketch is below. I then posted that sketch on the brand new website called ‘Urban Sketchers’, on day 1 of the blog, for which I was to be the ‘Davis’ correspondent. The header of Urban Sketchers upon its launch featured one of my sketchbooks with sketches of San Francisco. In those days Urban Sketchers, the brainchild of Seattle-based sketcher Gabi Campanario, online sketching friend back when our online sketching community still seemed pretty small, had a few correspondents from around the world but grew fast, issuing a Manifesto and encouraging communities of sketchers to get together and draw their world, or rather ‘see the world, one drawing at a time’. It launched on November 1st, 2008; a decade later Urban Sketchers (USk) is absolutely huge, with countless regional ‘chapters’ globally, many many workshops and gatherings, and the annual International Urban Sketching Symposium, which started in Portland in 2010 (with around 80 participants) and was most recently in Porto in 2018 (with around 800 participants!). So, to commemorate my first post on that first day, I went back to that corner of Old North Davis, a much more familiar district to me now, being on my way home, and sketched that same old house, above. The tree in front has gone, though another younger tree has sprouted up just behind the fence. Obviously in 2008 the leaves turned orange a little earlier than this year. My son was just a little baby. George W. Bush was still president; Barack Obama would be elected a week later. Spurs had just sacked their manager Juande Ramos (after our worst ever start to a league campaign, 1 point in 10 games; think about that, when we’re complaining now about having only 21 points from 10 games) and replaced him with Harry Redknapp. How times have changed. Me, I’m still drawing the rise and fall of trees. 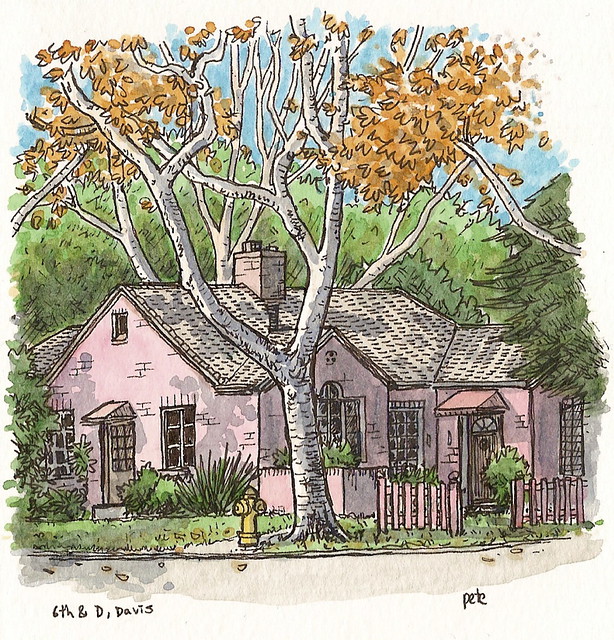 You can see the post I put on Urban Sketchers today at: http://www.urbansketchers.org/2018/11/a-decade-on.html