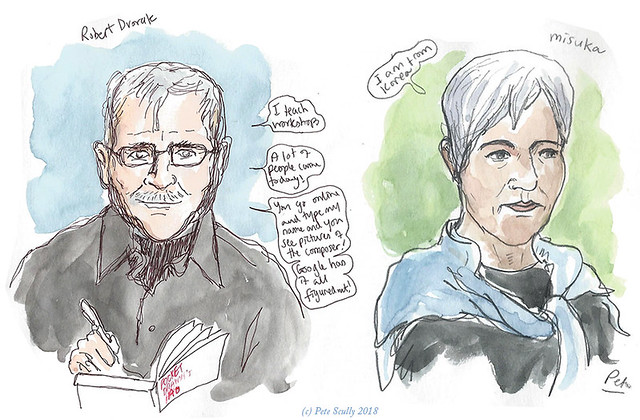 Last Saturday was the latest edition of the monthly Davis sketchcrawl “Let’s Draw Davis!”, back after its summer hiatus. The next one will be mid-November sometime. We had a good turn-out, and I started it off by inviting everyone to draw each other in a ‘portrait party’. Sketching sketchers is fun. I wanted them to be five-minute people sketches, quick as possible, and for the most part they were, but there was a lot of conversation. Did a LOT of talking! One person I was delighted to meet was Robert Regis Dvorak, who I had not met before and is a real art inspiration to talk to. It seemed like everybody (no exaggeration!) had been to one of his workshops over the years, he’s a really well known figure and art teacher. I should read his books sometime. He runs workshops and sketching tours all over, not just here in California but around the world. Nice guy as well. It was also a pleasure to meet and speak with Misuk Goltz (I thought she told me her name was Misuka when I was talking to her but others told me it was Misuk Goltz), she is also a well known artist. I was writing down things they told me but forgot to write that she was about to go and spend six months in Mongolia with her husband, which sounds really interesting. 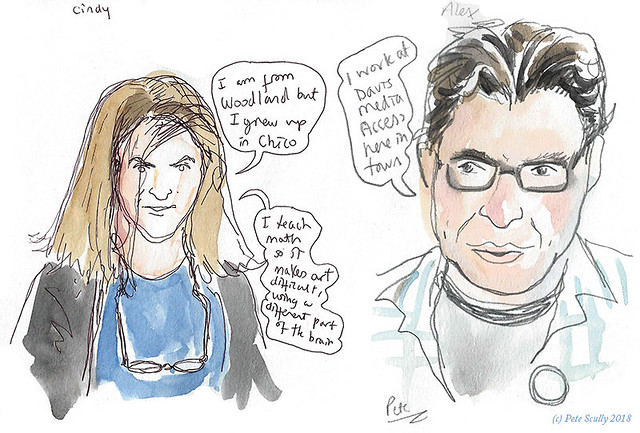 We were in the study lounge of the Memorial Union, which has lots of places to sit and sketch others. I was trying to flit about and speak with different people. Above is Cindy, who I was initially sketching with her head turned to the side (hence the hair outline over the face) but changed when she changed view. Next to her is Alex, who works in video, and we talked a bit about stop motion animation. I’ve been doing some of that again lately. Maybe I’ll show you some, though it’s not showing-in-public-worthy just yet. 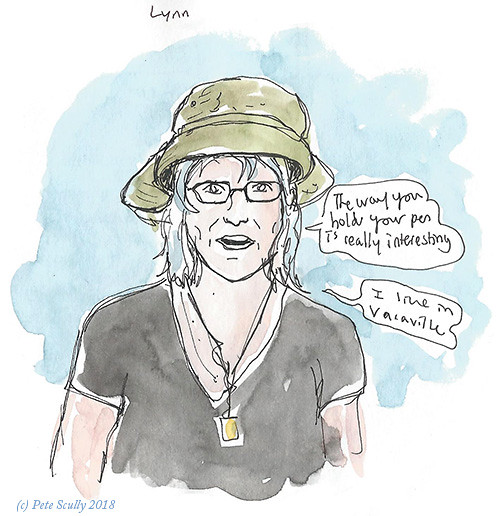 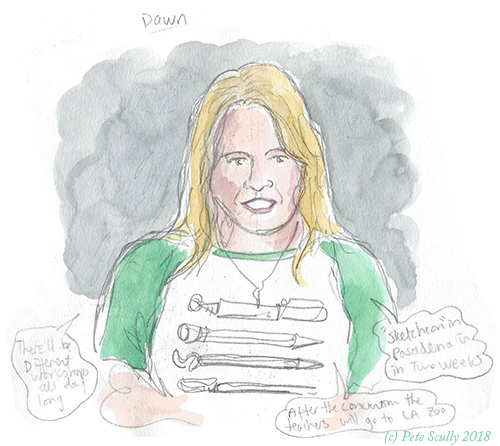 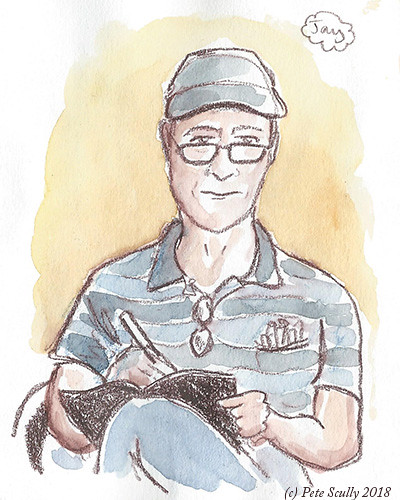 Above are Lynn Cohen, who I had actually met a few years ago when she bought one of my drawings at a show, she was very friendly and wore pants decorated with prints of her own sketches which was pretty cool. Then there was Dawn Pedersen, who wore a t-shirt from ‘Sketch-Con’ which is an event happening in Pasadena, I had never heard of it but it’s from Danny Gregory and Sketchbook Skool. I know a lot of the instructors in Sketchbook Skool and I’ve not met Danny in person but corresponded with him when I was in one of his books (An Illustrated Journey), so it sounds like something I’d like to go to, however I am coaching a team at a soccer tournament that weekend so can’t make it. By the way, our team which had started well lost 12-2 last week and 9-1 today, oh well. The last person I sketched there was Jay, who had a pocket full of Micron pens. 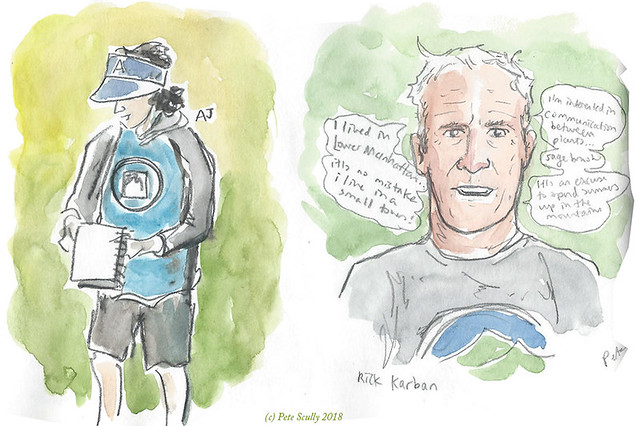 Above are AJ Tauber, who is part of the Oahu Urban Sketchers (and has been to the Davis sketchcrawls before), showing us her sketchbook at the final gathering; I sketched this one super-fast. There is also Rick Karban, an entemologist at UC Davis who had recently been in England at a sketching workshop from Roisin Cure. He was interesting to talk to, particularly from the point of view of someone who’s been in Davis a long time now and seen all the changes.  And finally, below, Freeborn Hall, which I sketched while chatting to sketchers at the MU. I had to draw at least one building, but I sketch so many UCD buildings (as regular followers will probably have noticed) that there was no rush for me to sketch a few more, sketching and chatting to people was more fun. I always get that feeling though after talking to lots of people, I hope I didn’t talk too much nonsense. Especially as I was encouraging people to write down what the people they were sketching were saying. Be careful what you say, it’ll end up in the sketch! 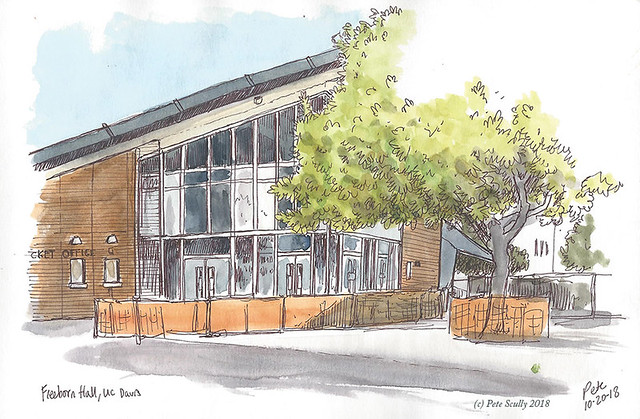 You can see what some others sketched by visiting the Let’s Draw Davis Facebook group page: https://www.facebook.com/groups/383785982124525/

One thought on “sketching the sketchers at uc davis”