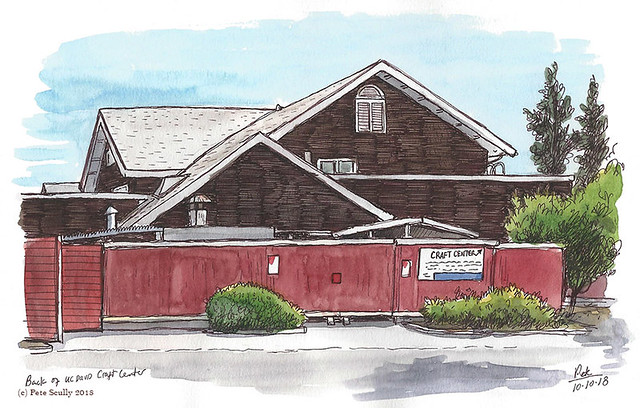 This is the back of the UC Davis Craft Center, in the South Silo building.  Well, it’s worth drawing buildings you have drawn plenty of times before from a different angle for once. I like triangles, shapes. I’ll tell you something, I’ve never been into the Craft Center. I should take a class with them sometime, they do some interesting courses. I like a bit of ceramics, not done that since I was, well since Everton were the English champions, that’s rather a long time. I actually won a competition for pottery when I was 11, Borough-of-Barnet-wide, I made this big butterfly and did a bunch of drawings that went with it. I won a book called “The Young Naturalist”, which was presented to me at Goldbeaters School. My older brother and sister used to rip the piss out of me for that book, because they thought it was about Naturism, and I had no idea what that was. (It’s where people go about all nudey). I was always like, you what? Obviously this is about finding caterpillars and identifying plants. Oh you mean bushes and snakes, they’d chuckle. Yeah I suppose so, idiots, I’d say back. I’m still confused about it actually. When people talk about Naturist beaches I imagine it being full of people in green jackets with little magnifying glasses and Thermos flasks. Anyway my only ceramics experience after that was at school with Mr Herring, yes Mr Herring, the pottery teacher who hated me. He was the only teacher who gave me ‘Discredits’. He was my Snape, or would have been my Snape if I’d ever been taught by him after the first term of the first year, which I wasn’t. He used to throw the clay across the classroom onto the pupil’s tables. In class one, I said to him, you shouldn’t do that. I was always told at Goldbeaters that Throwing Clay Was Bad. I lived by the Rules. So I got a Discredit for it! Then a few weeks later Mr Herring gave me another one for not handing in homework on time (drawing homework, which he usually criticized no end anyway, often giving me a C or a D; he was of the opinion I was rubbish at drawing, and wanted me to know that). He really put me off doing ceramics, because ceramics was done through him at our school and if he didn’t like you, then tough tit my friend. This wasn’t really a thing in any of my other classes (especially not Art, which I loved). That Discredit meant I got my one and only Detention. I remember the Detention teacher being surprised to see me, and I noticed her eyes say ‘hmmm’ when she saw who gave me the Discredits. I had to write an essay called “The Day I Nearly Died”, that was the Detention essay at our school. I wrote about when I was hanging off of a cliff at Alum Bay in the Isle of Wight on a school trip, and had to be rescued by Mr. Winston, one of my favourite ever teachers. Anyway I never did ceramics again, so cheers for that Mr. Herring.