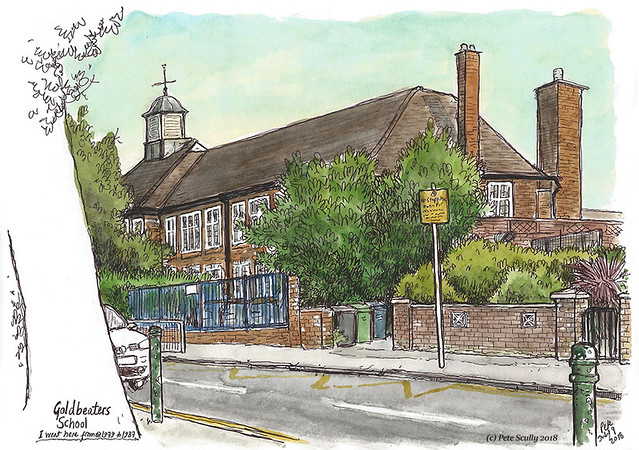 After the Spain and Portugal sketches, I’ll step back a few more weeks to the England part of the trip, for this post at least. This is Goldbeaters School in Burnt Oak, sketched early in the morning when I was awake with the jetlag and wanted to go for a little walk to see what had changed in my old home town. Burnt Oak, for those of you not familiar, is in the northern reaches of London, the second to last stop on the Edgware branch of the Northern Line, and it is is where I am from. Burnt Oak has changed a lot for sure but I’ll always be from there, and since my family still lives there I will keep going back. Another change this time, the Tesco on Burnt Oak Broadway has closed down. I really don’t know why they would do that (I really do, though: to build expensive flats). That was a shame, because it means now there is no Tesco in Burnt Oak, and Burnt Oak is where Tesco actually had its first store, in 1929. I will miss Tesco in Burnt Oak. I remember going shopping there with my mum as a little kid, she’d bump into her friend Lyn and they’d talk for half an hour, the Indian ladies on the checkout were always very nice to me, then we’d pop into the Stag next door to say hello to my nan, go into John Ford across the street to buy sewing materials, stopping by the greengrocers on the Watling to get five pound of of potatoes, and I’d maybe get a Slush Puppy from ToniBells on the way home. Yeah I hated being dragged around shops as a kid actually, I just wanted to go to Vipins and look at pens and pencils. And don’t get me started on being dragged around shoe shops in Brent Cross, to this day I can’t spend more than a minute in a shoe shop without saying “are we done yet?”.

Anyway enough childhood reminiscences. Well maybe some more. This is Goldbeaters School. Where is that name from? Much of Burnt Oak was built on the old Goldbeaters Farm, which goes back to the 14th Century. I attended Goldbeaters from the nursery (1979?), through the infants (1980-83) and through the juniors (1983-1987), before going off to big school at Edgware. I loved Goldbeaters. I’m so glad it’s still there, looking not very different from the day I left, from the outside at least. My mum went there too, back when it was a secondary (‘senior’) school. My oldest friend Terry, who lives in Japan now, that’s where I met him (though we only swapped football stickers, we actually became friends after we both left for Edgware), and his mum also went there (not at the same time obviously). My next door neighbour Tasha went there, we would walk to school together, her mum would pick us up, we’d walk through the park and play on the swings on the way home. Years later her kids went there too, and she worked there. Yet none of my siblings went there, they went either to Barnfield School (next to Silkstream Park) or the Annunciation (same street as Goldbeaters, but that school is for Catholics, and I’m not a Catholic). My old Goldbeaters friends, I hold such affection for to this day, though I’ve not seen many of them since then: Ricky, Daniel, Lee Glenn, Carl, Wayne, Lee Fickling, Hartman, Duggan (who is sadly no longer with us). And many others. We were very international too, with families from all over the world, all backgrounds. My old teachers, Mr Winston, Mrs Baldwin, Ms Welsh. Ok, ok, we can all do this, draw a picture of the school we went to and remember our old teachers and friends, and that is always tedious to read. Ok then here’s a few more memories that pop up randomly about Goldbeaters from the 1980s. Those outside toilets which were just the worst, basically a metallic gutter behind a wall. Football stickers on the playground when someone would knock them in the air and shout ‘scramble’!! Buying those buttery biscuits for 2p at break-time.  Singing “All Fings Brite and Byoootiful” in morning assembly. The noise in the lunch hall getting so bad that the dinner ladies would bang a massive metal spoon on the table and shout “SHUT-UP!!!” and it would go silent, for a few minutes. In fact that lunch hall (which was also the gym)… the terrible ‘mashed potato’ which was white and powdery and tasteless, the peas which are actually the reason I don’t eat peas to this day, bringing a packed lunch of pork pie, yoghurt and sandwich and not being allowed to go out an play until I’d eaten up the whole pork pie, horrible jelly and all (I don’t eat pork today either, I’m seeing a pattern emerge). Mr Bunster attempting to teach us to sing “Little Donkey”. Kids vomiting on the playground, and instead of cleaning it up the school would cover up the sick with sand. Grazing your knee on the concrete playground and going to the medical office where Mrs Lyons or Mrs Eftychou would douse a piece of cotton wool with a stinging antiseptic and hold it against the wound. Carl Sanderson making us always play ‘Hammer House of Horror’ (I always wanted to play ‘Star Wars’). Getting to be the one who rang The Bell for Home Time. Being on the team that beat our local rivals Woodcroft School in the ‘Panda Competition’, a quiz organized by the local police. Winning a borough-wide pottery competition for a ceramic butterfly I made. Drawing, drawing, drawing all the time, being known as the kid who draws all the time and holds his pen in a funny way. I could go on, but I won’t. I’m surprised I remember so much.