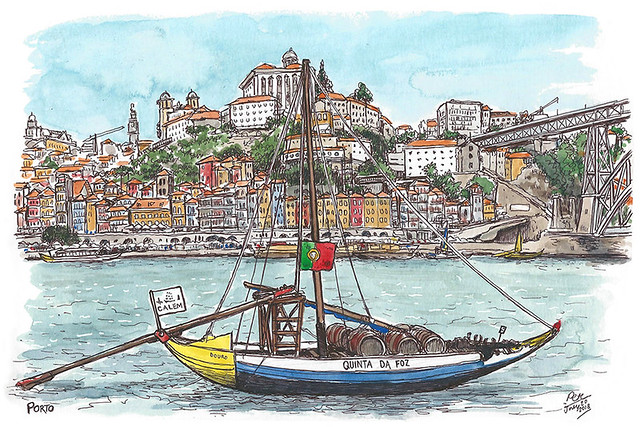 Picture postcard Porto. Pretty, panoramic, picturesque. I could go on. I think I’m most happy with the sketch above, of all the stuff I drew in Porto, this is the postcard scene. It was my free, non-workshop day, no obligations to be anywhere. I slept in a bit longer than I had intended (until almost 9), but my feet were happy for the extra rest. On this day I was heading over the river for the first time to Vila Nova de Gaia. I was interested to explore Gaia, and looking back I wish I had explored more but you sacrifice some wandering time for sketching time, and I really like sketching. The scene above took two full hours, as I added the paint on site (instead of the old colour-in-later thing), and it was beautiful there. I was under the shade of a tree, on a solo bench, and the weather was beautiful, sunny and warm but breezy. Views like this are there to be enjoyed.

So Vila Nova de Gaia. First of all, the boat – there are lots of these old boats along the banks of the Douro, loaded with barrels, each belonging to one of the many Porto wineries that dot the shores of Gaia. Most have English names and origins, as mentioned in my last post, and in fact these boats have a race up the river each year. It’s called the ‘Douro Rabelo Port Wine Boat Regatta’, which may not be easy to say after a few glasses of Sandeman Tawny. the ‘Rabelo’ is what these little boats are called. They are used to transport wine to Porto from the Douro valley. They’re flat bottomed, and that long piece of wood at the back (the ‘little tail’; that’s what ‘rabela’ means in Portuguese) is used to steer it. 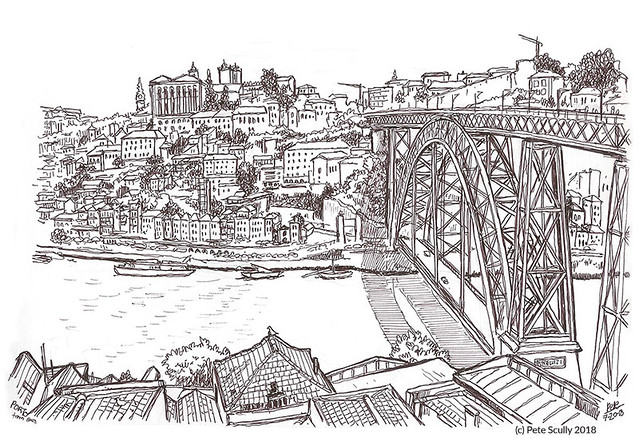 I drew the one above first, and intended to colour this one in but the wind on top of the hillside got the better of me. It’s a long way up. I had crossed the Ponte Luiz I bridge via the top, sensibly. My plan was originally to cross over here, go down to the riverside, sketch there, look at wineries, come back up and get the metro to the Dragao Stadium, home of FC Porto. I never did that last bit, because I was moving a lot more slowly, what with sketching these complicated detailed scenes. But what fun!! I never get to draw scenes like this back in Davis. Those bridges in the Arboretum just aren’t the same. I must say though, if there is a quick way down to the riverbank I didn’t find it, I took a long way, walking down a steep winding path. That’s why I never went back that way, but crossed the river at the base of the bridge instead (and then took an even steeper trek up the hill in Ribeira).

Now Vila Nova de Gaia has an interesting history, aside from being where the wineries sell their Port. First of all, it is actually a separate city from Porto itself. The hydrants look a bit different for one thing. Now this settlement existed in Roman times where it was known as Cale, or Portus Cale. Yes, it’s from this that we get the name ‘Portugal’, which was originally the large county around this area which expanded during the Reconquest of the middle ages to what we now know as Portugal. The port area was on the other side of the river, now called Porto (or ‘O Porto’, the port). 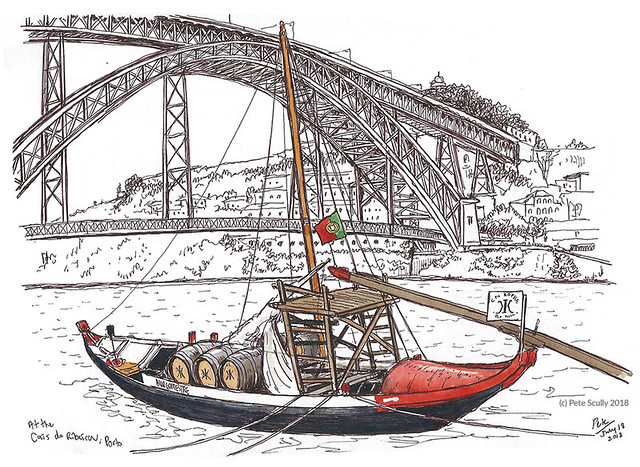 Here is another rabela, this one moored on the Ribeira side of the Douro. I love drawing that bridge. This was done a couple of days before, during the Sketchwalk (in which I didn’t really take part as a group activity – there were a lot of people – and missed the final group photo, comme d’habitude eh). I did have to rush back to the Alfandega though for the opening reception of the Symposium.

Now this final drawing I am showing also took a couple of hours, and is themed like the others in the it shows the river Douro and the Ponte Luiz I bridge, but this one is even more panoramic, being one of those double-page spreads I like. Click on the image to get a closer view. I really enjoyed sketching this, though I was standing when I did. Before I began I actually did try to sit at a cafe to rest and have a beer while I got started, but the waiter actually refused to serve me when he saw I had a sketchbook. “Are you going to paint here all afternoon?” he said gruffly. “Well I’m going to draw for about half an hour while I have that beer, yes.” “It is not allowed!” he responded with a mean look. “Fair enough,” I said, I mean there were only a few tables on a very narrow strip and I chose the one with the best view, but this Portuguese Basil Fawlty did irk me a little, I was a paying customer, and didn’t intend on being there for long; I had somewhere to be, and I wanted to sit down and have a cold Super Bock. I’m sure he had had many, many, many others doing the same and it irritated him. So I stood around the corner, where there were other sketchers, and I drew for about half an hour, and then went off to see Gabi’s demo, and then came back to draw the rest for about an hour and a half. I never got to finish the colour, and I do intend on adding it, at some point, but for now I’m leaving it as it is. Just imagine the colourful scene. The sound of seagulls, the chatter of tourists, the silent concentration of sketchers, and of course, the completely irritating sound of street musicians, playing ‘Besame Mucho’ over and over and over again. There are a lot of street musicians – you know how much I love those – and they all seem to play Besame Mucho way too much. There was one though that turned up while I was sketching this who wasn’t actually that bad – he didn’t play Besame bloody Mucho anyway – but then he started playing Oasis songs, but really, really slowly for some reason. “stop Crying Your Heart Out” took about eight minutes, as he warbled on “Hooooowwwwllld Oooowwwwooonnnn,” like a tortured coyote. I don’t think this was exactly Fado, but I can understand Saudade a bit more now, the feeling of sadness after listening to these terrible musicians all day long. Maybe that’s why the wait said it wasn’t allowed, maybe he was warning me of the bad music, like it was for my own good. Ok, I’m exaggerating my own grumpiness for amusing effect (that’s my story). Standing and sketching big detailed scenes is one of the things that makes me most happy, and puts me in a ridiculously good mood despite bad street musicians and grouchy moustachioed waiters. I chatted to some other sketchers I had never met when I was done, and then went off to Ribeira square to meet all the other sketchers for Drink’n’Draw.