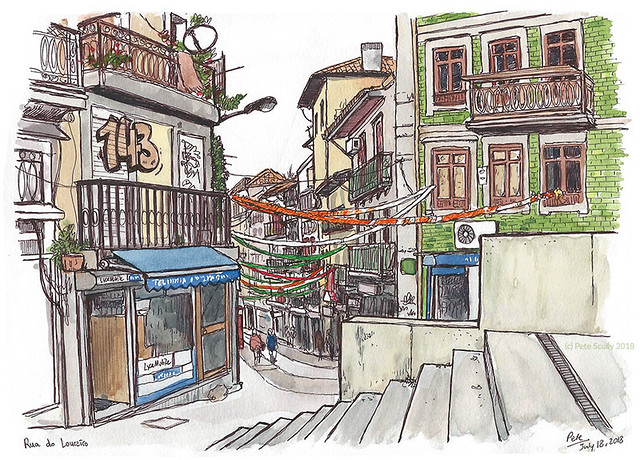 Taking a break from the people sketches, here are a few more sketches of Porto’s streets and hills. Before going to Porto, I checked out the roads I might be walking through on Google Street View, and picked my hotel behind the train station thinking, yeah that’s not too bad. My legs felt otherwise. The streets are pretty steep! There were a few different ways back to the hotel, none of which were easy climbs and one of which (Rua da Cima) was a little bit dodgy feeling at night, some seedy looking establishments behind doorways with ladies leaning in the half-light and men lurking in shadows nearby. So, I explored a few different routes. The street above is not far from there, and I came across it while walking down toward the Se Cathedral area from my hotel, this is Rua do Loureiro. I really liked sketching how the street weaved downwards, with those colourful garlands crossing from window to window. They are left over from a recent city celebration, I was told. As I sat and sketched, on an overcast Wednesday morning, some children played in the street nearby. It felt very much like a neighbourhood. That’s a bit patronising; of course it’s a neighbourhood. Porto is struggling at the moment with a relatively recent upsurge in popularity, with many locals being priced out of the old Porto quarters by the influx of tourist apartments. If the graffiti I read around town is accurate, anyway. Porto is no longer the undiscovered secret it used to be. 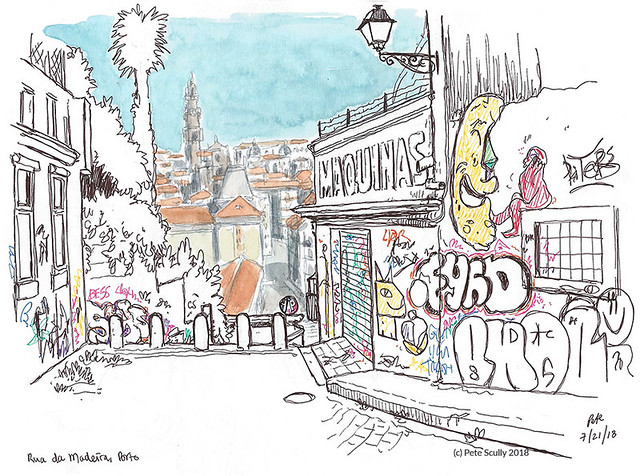 Above, another street that ran next to me hotel, this one was right outside my window. Rua da Madeira. Again, one that I didn’t mind going down in daylight, a bit less so at night (though there weren’t as many small seedy, ahem, ‘nightclubs’ along the way). It’s less a road and more an alley with a large staircase. However, it’s filled with graffiti, much of which looks commissioned by the city, large interesting murals mixed in with down to earth tagging. I had to draw it. This part is as far as you can drive down from Batalha, before the steps begin, running alongside the back of the Sao Bento train station. Streets behind train stations look like this all over the world. Even in Burnt Oak; it reminded me of those alleys behind the tube station on Watling Avenue, like the one I used to go down to go to Cubs when I was a kid. This is very far away from Davis, but I felt a little bit more at home here. There is a nice view over Porto, with the Clerigos tower in the distance. 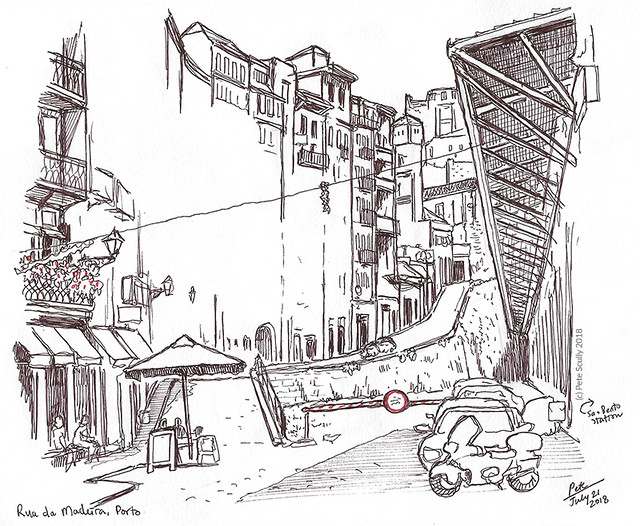 This is the bottom of that street. It is really steep! I stood next to Sao Bento, in the doorway of a hostel, on the Saturday afternoon to sketch this. Across the street some members of a youthful rock band were drinking the day away. I know they were a rock band because (1) they had long hair, and (2) I had seen them earlier in the day waiting outside a rock club across from here with all their instruments, while the singer (I presume he was the singer, he looked like the singer) was on the phone to someone complaining that they couldn’t get in to leave their instruments somewhere. Obviously a band on tour, with not enough roadies (or any). I knew they were a rock band then. They sounded Australian or south African, but they may just have been British and just Talking Like That. Anyway they were getting lubricated as you do when you are in a foreign country and you are young and in a rock band, minding their own business, and I heard another man swearing at them, a local by the sound of it, very drunk himself, swearing in English. Then a very large man, who must have been a roadie or their minder or dad or someone, escorted said swearing-man away from the cafe. That is it, that’s the whole story. I’m glad I wasn’t in a band in my early 20s. I was rock and roll enough, without growing my hair long. 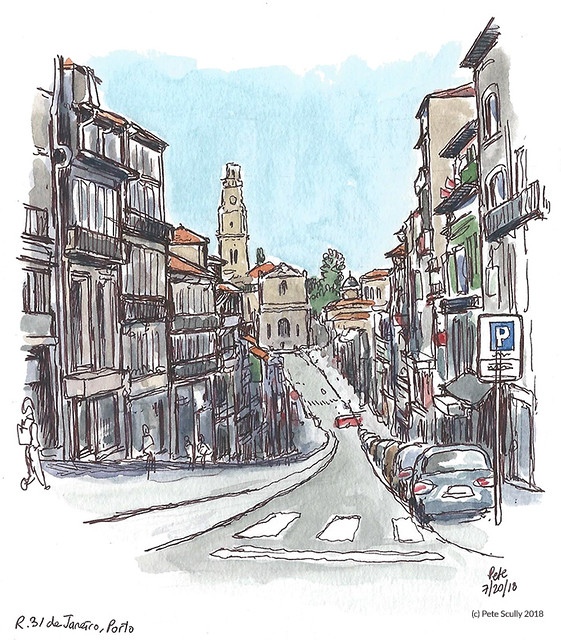 Now this street was very normal and wide and a great option for walking home at night, however it’s just too damned steep. Rua 31 de Janeiro, which slides down from Batalha and then slides up again to Clerigos, took me absolutely ages to walk up at night. By the time I reached the top I was exhausted. Thankfully there was an ice cream shop at the top that stayed open until almost midnight. The top of this street is at the junction of Batalha and Rua Santa Catarina, a much nicer part of town with more upmarket shops and – amazingly – no steep hill to climb. I never did sketch the Cafe Mjestic, nor did I find the Bolhao Market nearby, but I did sketch the outside of this lovely bookshop, below. In case you are wondering, no, this is not the famous bookshop of Porto, Livraria Lello. That is the one with the magnificent curving staircase. I never actually went there. Well, IO tried, but on a Saturday afternoon it was packed with a very long line out of the door. You have to buy tickets to get in. The Urban Sketchers instructors were all given a free couple of hours after closing to come in and sketch one evening, but I’m not an instructor so couldn’t do that. It was also further away from where I was staying than I realized. Ah well, I’ll save that place for next time. And maybe next time, I’ll stay at a hotel closer to the bottom of the hill. 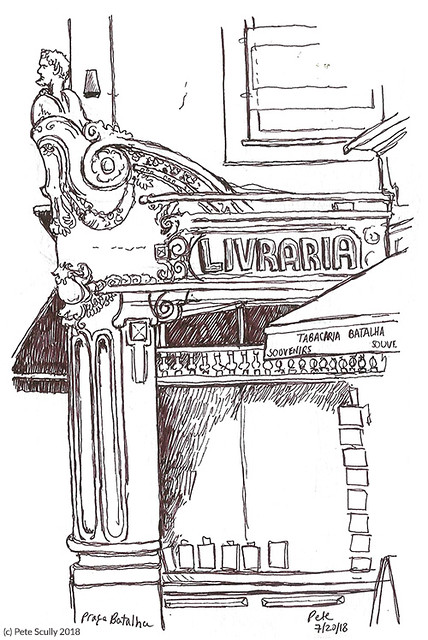