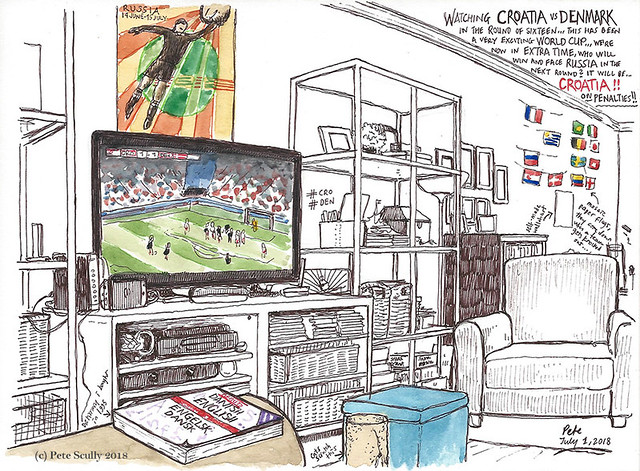 The knockout stages of the Russia 2018 World Cup started yesterday. The first game was ridiculous, with France winning 4-3 against Argentina, Messi dropping his head while 19 year-old Mbappé turning up the speed. Kylian Mbappé, by the way, was born AFTER France won the World Cup in 1998. Incredible. Messi on the other hand just stood there after the final whistle, while various people came and tried to hug him. Portugal v Uruguay was a tighter affair with some good football – that cross-field pass from Cavani to Suarez, so that Suarez could cross it back for him to head home, was a thing of utter beauty, bettered only by Cavani’s superb second goal. I felt bad for Portugal, and of course out went Cristiano Ronaldo. I like Ronaldo, and particularly love the way he pulls his shorts right up when taking a free kick. This morning, we got up early again to watch Spain vs Russia. These early morning get-ups are getting old fast. I interspersed iot with watching the Formula 1, the Austrian Gran Prix, and somehow contrived to miss the best bits of both events. We did watch extra time, and of course the penalty shoot-out, and to our surprise Spain lost. Now I had originally predicted Argentina to win the World Cup, if you saw my long posts with all the kits, and that obviously didn’t work out, so I switched my prediction to Spain. Mystic Pete strikes again eh. So just to be safe and guarantee an England victory on Tuesday, I am predicting Colombia will win the World Cup, definitely for sure, they are gonna do it. Ok, so for today’s second game I parked myself on the couch and watched as Croatia and Denmark battled it out for a 1-1 draw. I sketched from the couch – see the picture above. In the distance you can see our paper mosaic flags. When a team is eliminated the flag is taken down. Above the TV, the official World Cup poster. And on the couch next to me, the Berlitz Engelsk-Dansk dictionary which I bought in 1995 ahead of my summer picking strawberries in Denmark. Yes I would wake up at 4am and pick strawberries on a farm in southern Funen, so you might say this isn’t the first time I’ve been up early rooting for Denmark. In the end it came down to a battle of the keepers, and though the Danes had the heroic Kasper Schmeichel, son of the Great Dane Peter himself (in case you missed it when the commentators mentioned it like a thousand times), the Croatian goalie saved one penalty more, and Modric and friends go through to meet Russia in the quarter finals. And I got another living room sketch out of it. It’s so hot these days I’m not sketching outside much.

One thought on “croatia vs denmark”